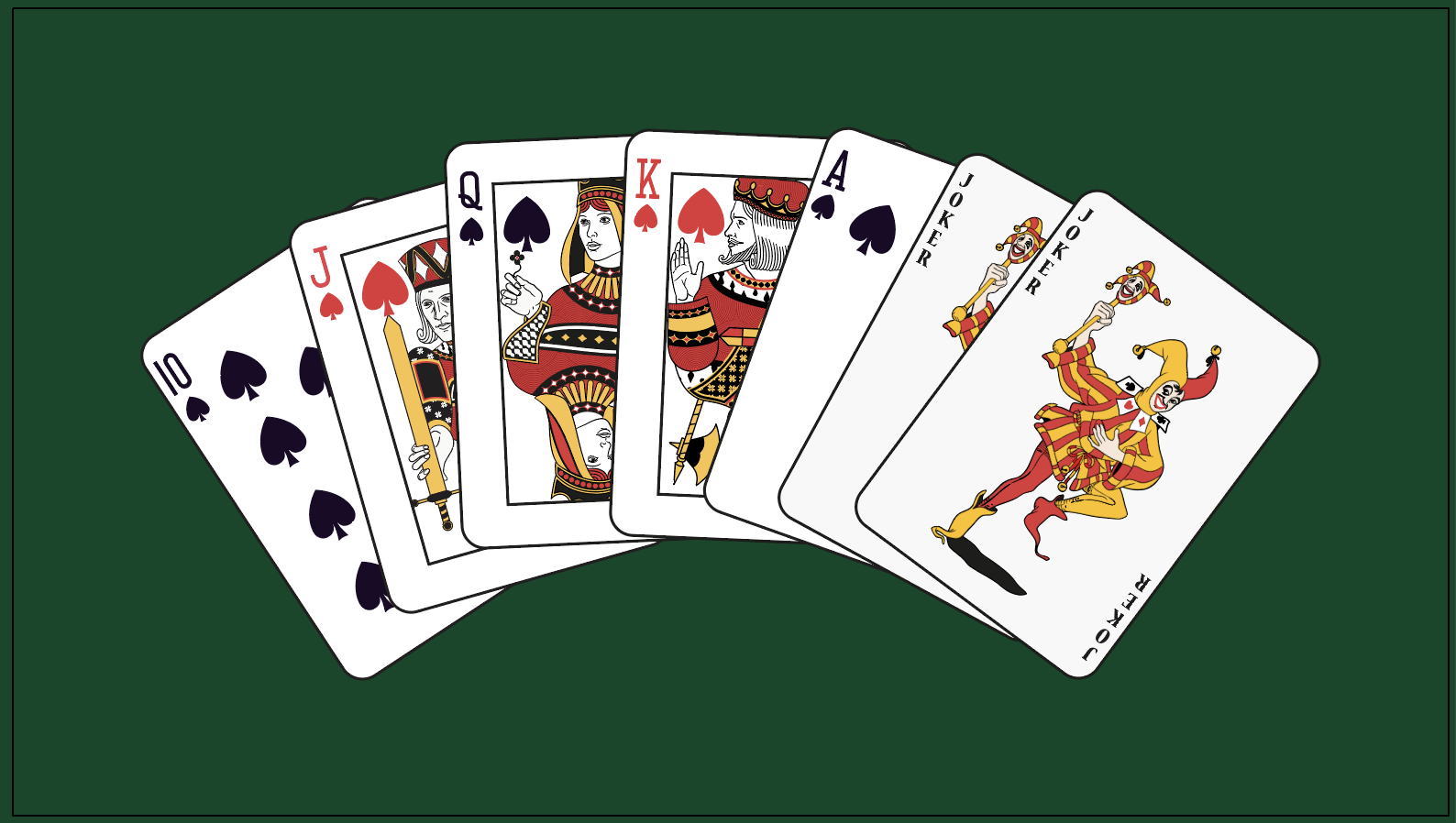 The spades game has several variations that make playing spades more fun. One of the variations is spades with jokers. As the name suggests, the game involves the use of two jokers. It is played using a standard deck of cards, including two different jokers and excluding the two of clubs and two of hearts. Moreover, the two jokers are considered as the highest trumps in the game.

The spades with jokers game is played between two to five players as individuals or between four players in partnerships. While the gameplay is pretty similar to the basic spades card game, the difference between the two games lies in the cards. Also, the Spades suit remains to be the trump.

If you want to learn how to play spades with jokers, here’s everything you need to know.

Object of Spades with Jokers

The objective of the spades with jokers card game is to win at least an equal number of tricks as bid at the start of the game.

To deal the cards to each player, a dealer is chosen. Each player randomly draws a card from the closed deck, and the player who draws the highest card becomes the first dealer. After that, each player gets the turn to deal in a clockwise direction.

The dealer begins from their left and deals the entire deck, face down, to every player, one at a time. After the cards are dealt, the players pick the cards and arrange them in the order of suits.

Once the cards have been dealt to each player, the player at the dealer’s left bids the number of tricks they will be able to win. The other players follow in a clockwise direction and make a bid. Each player must make a minimum bid of one trick, and no player can pass or bid zero. The bidding takes place only in one round. Moreover, no player names a suit in the bid as the spades are the default.

Before the game begins, the players decide the number of points that the winner must score, and the game is scored based on hands. Like the basic spades game, the spades with jokers game is usually played for 500 points and 200 points if the players want to play a short game.

The player who wins the trick leads next, and the others follow suit. The game continues in a similar fashion until the players have no cards left in hand. Therefore, in total, each hand is worth 13 tricks.

Also Read: Popular Card Games to Play for All Occasions

When a player makes a contract (wins an equal number of tricks as they bid initially), the player earns 10 points per trick. Moreover, if the player wins more tricks than the bid, they score one point for each trick.

If a player breaks contract (fails to win at least an equal number of tricks as the bid), the player’s score is 0. For instance, if a player bids 5 tricks and wins only 4 tricks in the game, no points are awarded.

In some games, making too many overtricks or bags in some games results in a penalty score. If a player accumulates 10 bags in a game, the player receives 100 penalty points.

When to play Joker in spades?

Are jokers used in spades?

Jokers are used in one of the variations of spades – Spades with Jokers. Two jokers, namely, Big Joker and Little Joker, are added to a standard deck of 52 cards. The jokers are also called Full-Color Joker and One-Color-Joker, respectively.

What is Joker Joker Deuce deuce in spades?

Joker Joker Deuce Deuce in spades implies that the cards are ranked in the order Big Joker, Little Joker, deuce of Diamonds, deuce of Spades, A, K, Q, J, 10, 9, 8, 7, 6, 5, 4, 3, 2. Therefore, while playing spades with jokers, you must never forget that the deuce of Diamonds ranks higher than the Ace of Spades.

If Spades sounds like an exciting game, then we’re sure you’ll love playing card games such as Spider Solitaire, Cube Solitaire, and 21 Puzzle on the MPL app. Download it now!