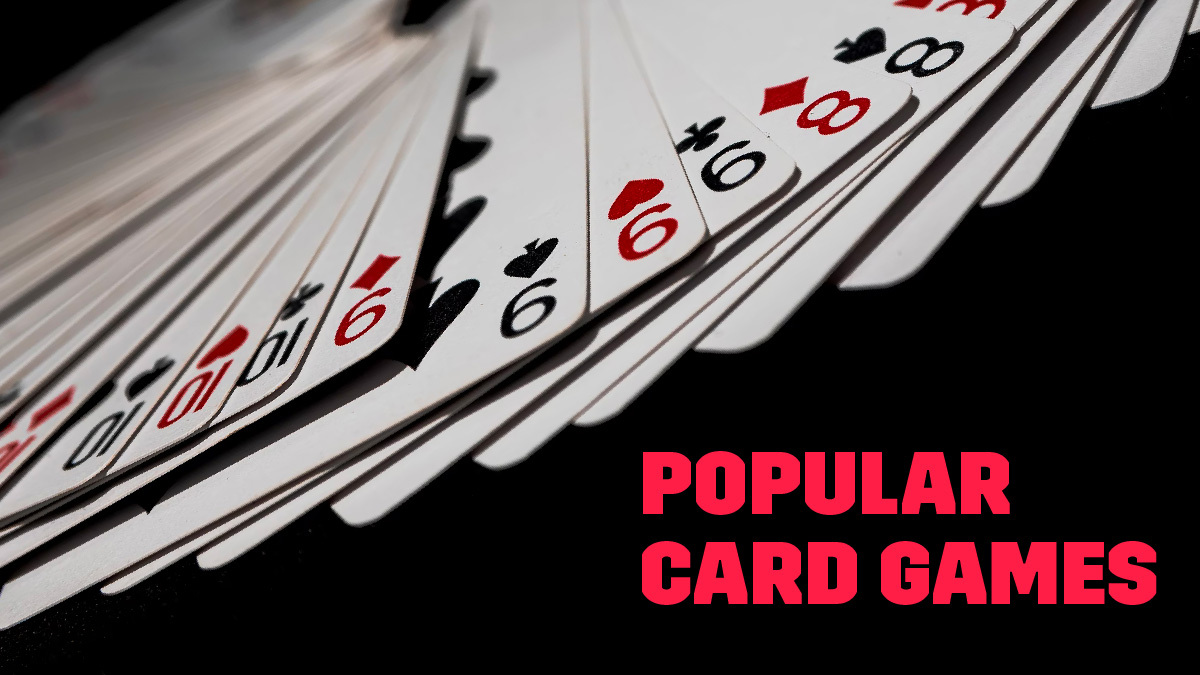 A fun way to pass the time at social gatherings is to play card games as they are a constant source of entertainment. For centuries, people have played card games as they’re entertaining, portable, and economically viable. The rules of card games are also relatively easy to learn, but the winning chances often range from straightforward to complex. Almost all these games involve a standard 52-card deck of playing cards and specific objectives to complete to win.

Numerous card games pass on from generation to generation owing to their adaptability and setup. So, there’s no surprise if you are playing a card game that your grandparents used to play during their heydays. Card game enthusiasts categorize these into:

• Trick-Taking games –  A trick-taking game is where all players possess a hand of cards, with the gameplay focusing on a series of “tricks.” Each trick comprises the players playing a single card from their hand, with the trick usually going to the person who plays the highest card. Big names include 500, Bridge, Euchre, Hearts, Pitch, Spades, Whist, and more.

Out of all the names we mentioned above, here are some trendy ones that everyone should know about and play at least once in their lives:

As most of you already might know, Rummy is a classic card game where players attempt to form sequences (of three or more cards of the same suit) and sets (of cards with the same value or rank) with their thirteen cards. They can also use wild or printed joker of the deck to create an impure sequence or set. The key here is to avoid drawing cards from the discard pile. Once a player manages to arrange thirteen cards in two valid sequences – including a pure sequence and more clusters (sequences or sets), they can go ahead and make a declaration to win the game.

Multiple variants of the game exist. This includes Gin Rummy – an exciting game where the players keep the “melds” in hand until a deal concludes, with the cards’ face value determining the score. Commercially published versions like the Mystery Rummy series also have many enthusiasts. Contract Rummy adds another layer to the game in which players need to fulfill a contractual obligation usually involving a fixed combination of sets before melding.

Bridge is a classic trick-taking game that uses a standard 52-card deck. The game’s basic format involves four players in two opposing partnerships, with the partners seated opposite each other around a table. Thousands of people across the globe play the game online or physically at clubs or homes. It is one game that enjoys a tremendous following among the seniors.

For starters, a trick begins when a player plays their first card. The auction determines the leader to the initial trick. The leader to every following trick is the one who wins the preceding trick. In clockwise order, every player plays one card over the trick. Players need to play a card of the same suit as the original one led, and if in case they do not have any, they can play any card. The player who played the highest-ranked card wins the trick.

The bonus scoring system varies depending on the variant. The casual-play variant Rubber bridge, for instance, awards a bonus to a player holding a specific combination of high cards. On the other hand, Duplicate bridge is more prominent in clubs and tournament venues, where the objective is to perform better than other pairs playing the same cards.

Canasta, a card game from the rummy family, initially rose to fame in the 1950s. Lots of variants exist for Canasta, ranging from two, three, five, or six-player games. The most common version is played between four players in two partnerships, with two decks of cards. The game finds its origins in Uruguay. Players try to form melds of seven cards with the same rank and can also “go out” by playing every card in their hands.

The player who sits left to the dealer’s left gets the first turn, and then the game progresses clockwise. A turn starts by drawing the first card from the stockpile into the player’s hand or picking up the whole discard pile, with some applicable restrictions. The player then has to make as many valid melds as possible using the cards in hand. A turn concludes when the player moves a card to the top of the discard pile. An “undo” action is not possible for a meld card; once a card is drawn, it remains drawn.

Many consider Poker to be the ultimate bluffing game. No-Limit Texas Hold ‘Em is one of those fun games that television and local tournaments have popularized to truly unbelievable levels. Players “bet” poker chips on whether or not they hold the best five-card poker hand. While many people imply that the game is fun only when it involves real money rewards, the game still warrants a semi-serious approach to play, even casually.

Certain poker games use face-up cards. For everyone’s viewing, these cards are dealt out. In Hold Em, all the community cards are dealt face-up, and all players are allowed to use them to enhance their poker hand. However, not all games allow this. Players use two hole cards and the five community cards to choose the best five poker card combinations. After each stage, a round of betting takes place where the player can raise, call, check, or fold. The player who survives, in the end, wins the pot. If more than one player remains after the last betting round, cards are revealed. The highest-ranked hand of cards wins.

If you fancy your card-game fix on a handheld device (like a smartphone or a tablet), the MPL app has some that you might love. You can play the following on an iOS or Android device, provided you have a stable internet connection:

21 Puzzle on MPL is as simple as it can get! The game’s objective is to earn points by compiling the points of cards in hand and getting to a score of 21. You can play the game in 1v1 and multiplayer tournament formats on the gaming platform. It follows a column-based board with randomly matched players using a 52 card deck to build their scores. Each time a player clears a column by getting a score of exactly the number 21 (or less), the player starts to earn points. They can also use specific combinations to earn additional points.

The rules are easy for anyone to understand, and luckily so, 21 Puzzle is the kind of game that doesn’t require extensive experience and skills to win. If you’re good at basic math, especially addition, you’re good to go. Try 21 Puzzle on MPL now and win big!

The classic game of Spider Solitaire is now available to play on your smartphones, courtesy of the MPL app. The original game can be pretty sophisticated with multiple decks and suits. Still, Spider Solitaire on MPL is very easy to play as it only uses a single pile of the deck and only Spades among the suits. Every battle is fast-paced, with a timer countdown. The game screen consists of three aspects: The tableau – where the player assembles and shows the cards; the stockpile – the remaining cards go here; the discard pile – consisting of cards removed by the player.

The player’s objective is to form card stacks in descending order from K to A in the tableau columns. Each sequence should follow this order – K, Q, J, 10, 9, 8, 7, 6, 5, 4, 3, 2, A. When you create a set in this order, the set removes itself and forms a foundation. You win the game when all cards are arranged into the King to Ace suit sequence and transferred to the foundation/discard pile. If neither player completes the objective on time, the one with the higher score wins.

The game we all played on our PCs back in the day is now available on MPL with slight tweaks to the rules and timed game sessions. The MPL variant uses one deck of 52 cards, with the game objective being to arrange all cards in the order of Ace to King (of the same suit) and eventually move them to the foundation pile.

The layout of the game includes the same elements as Spider Solitaire, along with “Undo” (to reverse the latest move) and “Submit (to declare) buttons. Each game session lasts five minutes. You need to either complete the objectives or earn more points than your opponent to win. Pretty simple, right?

Go check out Cube Solitaire on MPL right away!

Way too many fun card games are out there for gamers to enjoy on their phones. Why not make use of the comfort of playing from your phone and the wildly exciting opportunity to win real money rewards in the process? Don’t overthink. Download the MPL app now!