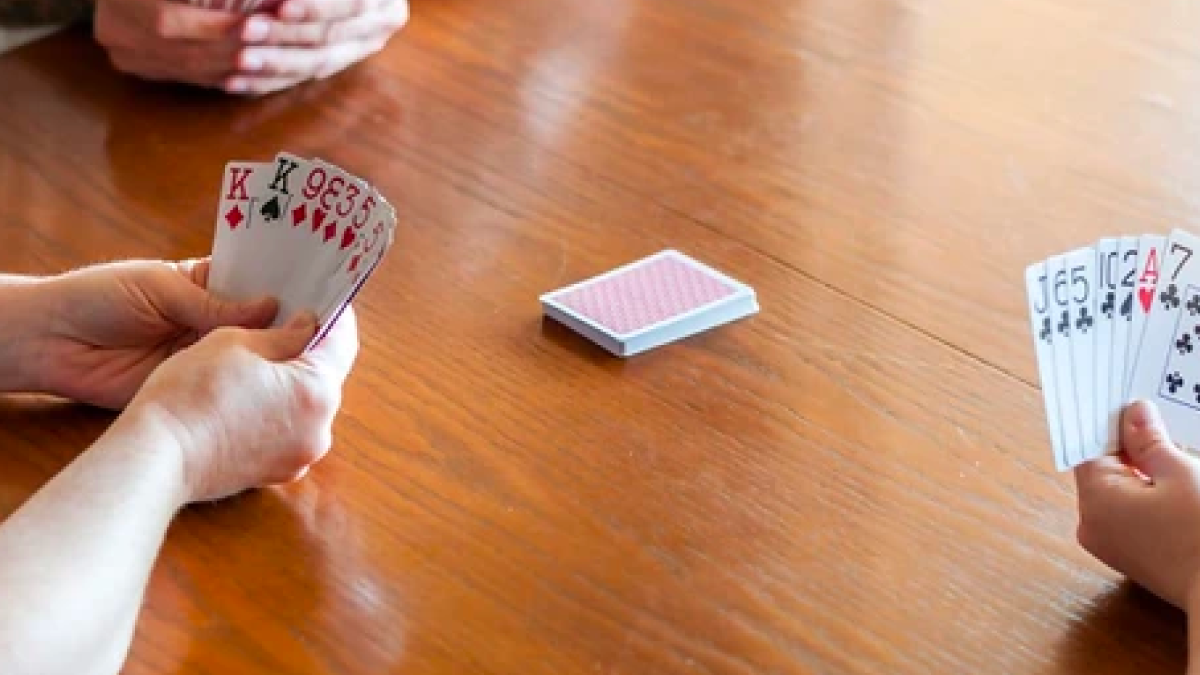 Card games are one of the best game genres for millions as they are fun, involve the application of skills, and can be played at any convenient location, be it online or offline. Perhaps the only constraint users face while playing card games is the unavailability of players in games that require four or more players, especially in a physical setting. For instance, poker games usually involve six or more players at a time.

Most classic card games are either best for two, four, or other even numbers of players. But what if your group comprises just three players that love card games, and getting the fourth player can be challenging at times? All you have to do is search for fun card games for 3 players in times like these. Fortunately, we have the perfect list of the best 3-player card games you can play when caught up in such a situation.

But before you even take a sneak peek at the list, let us warn you that these games are highly entertaining and strategy-packed. Some of these games will only take a few minutes of your time due to their fast-paced nature.

Here’s a list of handpicked card games that you can play online or offline.

You know what you’re getting yourself into if you play card games like Uno. The Crazy Eights card game is quite similar to the popular Uno game. The players are dealt five cards each, and the goal is to get rid of the cards before the other players.

In this card game, the players use a 52-card deck to deal five cards for each player, and the remaining cards form the draw pile. The top card from the draw pile is placed next to the pile, and players take turns playing cards of similar rank or suit as the previous cards. If a player doesn’t have a card to play, they can draw a card from the draw pile. In each round, the first player that gets rid of all cards scores points based on the opponents’ cards. Finally, the player that reaches a predefined score before others wins the game.

The name of the Crazy Eights game is based on the special cards – 8s. A player can play the 8s card any time (unless a 2 was the last card played) and choose the subsequent suit. The game also has several other special cards, such as 2s, Qs, and As that have special powers.

This is a pretty obvious choice, especially when it comes to pairing card games. Rummy has multiplayer card game variations and sub-variations such as Points Rummy, Pool Rummy, and Deals Rummy. Other popular variations of rummy include Gin Rummy and 500 Rummy.

This fun card game is usually played on 2-player, 5-player, or 6-player tables, but this game can also be played between 3 players. In the 3-player game, the players are dealt seven cards each, and the goal is to be the first player to get rid of all the cards in hand. The players must meld the cards in groups of 3 or more cards of the same value or consecutive order from the same suit. Depending on the variant being played, the rules to win the game can vary slightly.

If you enjoy a faster rummy variant, you can try Gin Rummy on the MPL Pro App.

Another popular classic game where the cards’ ranking doesn’t matter, Go Fish, is the perfect three-player card game. The game is popular amongst kids and adults alike due to the easy rules.

The objective is to collect more books than the opponents. Grouping four cards of the same value can make books.

Usually, each player is dealt six cards, and the remaining cards are placed face down. The player takes turns clockwise to pick an opponent and ask if they have a specific rank card. However, the player can ask for a card only if they possess a card of the same rank. The opponent must give all the cards of that rank if they have them. The other players follow the same until an opponent has no cards of the desired rank. That opponent says Go Fish, and the player that asked for the specific card must pick a face-down card from the discard pile.

Bullshit comes in the category of super-easy card games and is often played for fun in the United States. As the title suggests, the key is to use trickery and deceit to discard the cards in hand.

The fundamental trick to win this game is to be smart enough to bullshit other players and catch other players bullshitting. The game can be played between three to ten players using a standard 52 card deck, including jokers. The players are dealt cards equally, and the first player announces which card/cards he is playing while placing them face down. The next player can either ask to view the first player’s cards if they think they’re bullshitting or pass or play their move by placing their cards face down, announcing that the cards are of the same rank. If the player that challenges the previous player’s cards finds that the player bluffed, the first player must take their cards back. If the first player rightly announced the cards, the second player must pick all those cards.

Let it Ride is part of the new wave of new casino games that emerged during the late 1990s. It is a casino poker-based game that was immensely popular during the last twenty years, though the player base has slightly reduced recently.

The game’s rules aren’t precisely why new players fail to show interest. Many serious poker players are not too excited about the game’s high house edge. In simpler terms, there is no option for players to impact their winning odds much by using their skills and experience.

The game commences with every player being dealt three cards, exactly as two face down to the dealer. The poker strength of the player’s hand decides what is paid to them. What makes Let It Ride different from other casino games is the player’s opportunity to pull out their stakes.

The slapjack game comes in the easy three-player card games category. Inspired by Egyptian Ratscrew, the game is enjoyable for all age groups. Essentially, this card game can be played between two or more players using either one or more decks. Therefore, it is a perfect card game for three players as well.

Any guesses for why it’s called Slapjack? The game involves a slapping mechanic to take ownership of the cards. Firstly, the players are dealt an equal number of face-down cards. They take turns playing their top card face-up at the center. The players must play the cards quickly and watch out for the Jacks. As soon as a player plays a Jack, all the players slap the card, and the fastest one gets to keep the stack. When a single player collects all the cards, the game ends, and that player becomes the winner.

Trick-taking card games are challenging yet entertaining for all age groups. One of these card games for three players is the Ninety-Nine game which originated in 1967. The unique feature of removing cards to make a bid makes the game quite popular.

Ninety-Nine is similar to Spades, where players must bid how many tricks they expect to win. However, the twist in this original game is that the players can make a bid after removing three cards. The game is played for nine deals, and the player with the highest score is declared the winner.

The players make their bids in secret, represented by suits:

The gameplay is similar to Spades, where the players have to follow suit when possible, and the higher rank cards win the trick. The scoring system of the Ninety-Nine game awards 1 point for each trick won, and bonus points are awarded if a player wins the exact number of tricks as they bid.

Isn’t it fun to ally with a player against the third player? The Skat card game is a fantastic trick-taking game where you can do that. It is one of the most entertaining card games for three players played with German suited cards or a French deck of 32 cards from 7s to Aces.

When the game begins, each player is dealt ten cards, and the remaining two cards are placed face-down to form the Skat. Then, two players bid against each other, and then another bid takes place between the first bid winner and the dealer. The higher bidder becomes the declarator and can decide whether or not to see the Skat.

The declarator can pick a trump suit from the seven options, including four suits or four jacks, no trumps, or open null. The declarator must make higher points than the other players and cover the points bid at the start.

The Skat card gameplay is a little complex for beginners, but there’s no end to the entertainment once you get the hang of it.

Old Maid is one of the classic games for grown-ups and young children. Also known as Black Peter, the card game is played with only 51 cards and simple rules. Players are dealt all the 51 playing cards at random, and they must make pairs of two cards of the same rank and remove the pairs to be left with only 1 card of any rank.

The dealer plays first, followed by other players, putting down any card face down in front of the player on the left. The player on the left can make a pair with that card and discard the pair. The game continues until there’s just one player left – the loser.

Also called the Crazy Nines, the Golf card game comes in the category of the most fun 3 player card games where luck overshadows skills. The goal is to score the least points after nine rounds are completed.

Golf has several variations, such as 4-card Golf and 6-card Golf. The 6-card Golf game is played with two standard decks of 52 playing cards, and each player is dealt six cards. The players must arrange their cards face-down and turn only two cards face-up. The players draw and discard cards to lower their score in every turn. The winner of this fun game is the player with the least points.

Baccarat is one of the casino games featured frequently in Hollywood movies. The game is relatively easy as it’s based on guessing and uses only thirty-six cards from a standard deck. In this game, the number of cards dealt isn’t based on the number of players. Only two hands are dealt with two cards for each hand in the game.

The goal in a Baccarat game is to score the closest number to nine by betting on the player or the banker. The game has a few rules that the players must understand to play smoothly. Nonetheless, Baccarat seems to be one of the most entertaining three-player card games where you don’t need to strategize much.

The cards in Baccarat are ranked as follows:

Keep this list handy every time you hang out with your two best buddies who love card games. You can even have fun playing some of these card games (such as Gin Rummy) online against actual players in real-time by downloading the MPL app. There are other card game options, such as Spider Solitaire, Cube Solitaire, and 21 Puzzle.