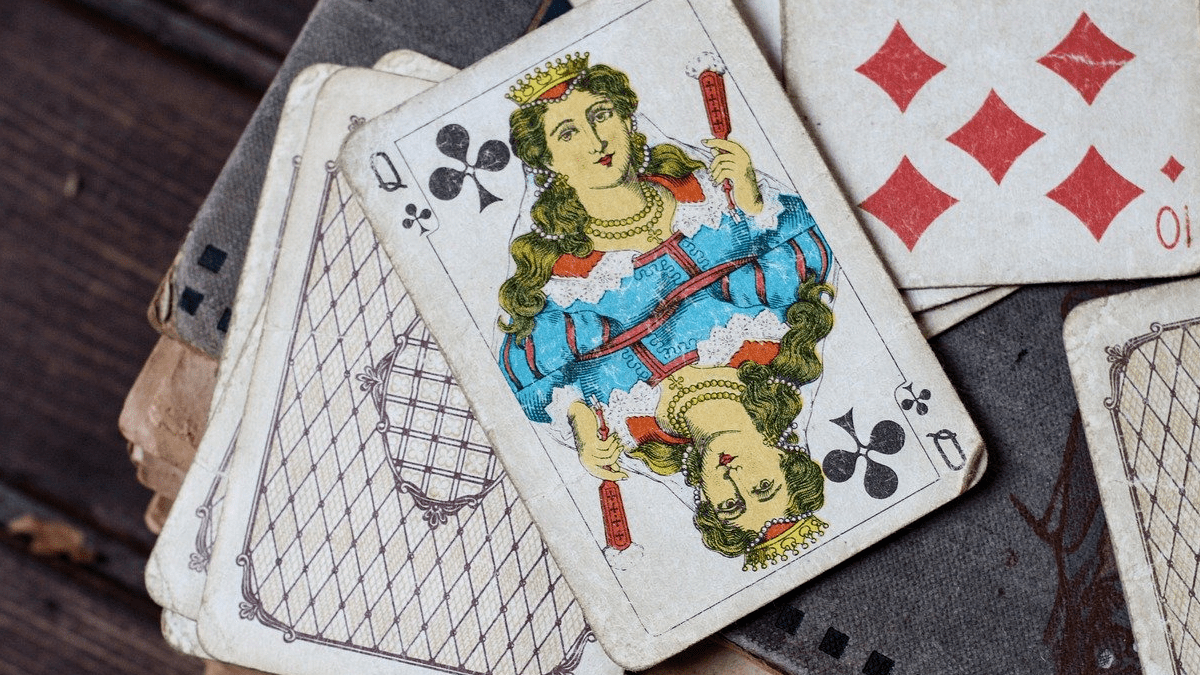 Old Maid is a card game that belongs to the “fall guy” family. The purpose of scapegoat games is to resist possessing a certain card or cards.

Old Maid is a hand match game for two or more players that uses a standard 52-card deck. The game’s goal is to link up all of your hands and prevent having a Queen out towards the end.

Check out our Go Fish and Kings Corner guides for other classic card games.

A childless and unmarried spinster woman is referred to as an “Old Maid.” As a result, the Queen is the only card that remains unpaired. The term was initially used in England in the 18th century. The card game Old Maid first appeared in the late 1800s. Though the game’s original roots are uncertain, one probable explanation is that it is derived from ancient British drinking games.

Historically, the game’s Old Maid has been portrayed as a negative person (the player who has the Old Maid loses the game after all). Special decks of Old Maid were developed as early as the late 1800s, with inappropriate images of the titled figure on them. An 1890 deck, for instance, depicts an older woman wearing trousers and bike riding. While this may look totally normal now, it was offensive to suffocating Victorian decorum. The image of the Old Maid on specialty decks moved from the Victorian bike rider to the troublesome caricatures of Silly Old Cat Woman and Knitting Fanatic over the twentieth century.

While the depiction of the Old Maid varies depending on the deck, it is nearly always a grandma-like figure.

An initial dealer must be selected before the game can begin. To do so, each player is dealt a card from a stack of cards, and the person with the highest card is the first dealer. A repeated transaction breaks ties. Ace is high, and 2 is low in the dealer procedure.

To designate the “Old Maid,” the dealer first takes one Queen from the deck. After that, the dealer shuffles the deck, and the player on their right cuts the deck. The dealer then passes all of the cards clockwise to each player one by one.

Players can “Go Out” and avoid becoming the Old Maid in two ways: couple up all of their cards or have the opponent to their left take their final card for the draw.

There will always be an unpaired Queen because one of the Queens was eliminated. The player who possesses it at the conclusion of the game is the Old Maid, and they lose.

Assume you’ve been dealt three Queens, an Ace, a 9, two 10s, a 2, 3, 8, and two Jacks. You pair up the Queens, Tens, and Jacks, whereas the opponents do the same. The dealer is the player to your right, showing you their hand facing down. You choose at random and get a 9. You match the two 9s and turn the opponent to your left’s hand upside down. They select your Queen at random. The round is over, and the new one begins. You choose a 4, show your hand, and the person to your left selects your Ace. A round is completed. You receive a 7 and a forfeit an 8.

A round is completed. You receive a 7 and lose an 8. A round passes, and the person in front of you is eliminated. You then get your original Queen back and lose a 7. A round passes, and the guy on your left is eliminated. You win a King but lose a 3. You then pick the last card of the preceding player. They go, and you take on the role of the Old Maid.

How to win at Old Maid?

There isn’t much room for strategy in the card game Old Maid. If you do have the Old Maid in your grasp, you should try to persuade the person on your left to accept it. You can employ reverse psychology to convince them to accept it. Try concealing it or putting various cards in front of them; perhaps they’ll try to steal the hidden card. Also, if they always take the card from the same spot, place the Old Maid card there next turn. To limit your chances of receiving the Old Maid, don’t pick the card from the same location every time; else, the opposing player will figure it out.

Also Read: How to Play the Whist Card Game?

In certain nations where the game is known by a masculine name, such as Black Peter, a Jack rather than a Queen is removed, and the loser is the owner of the unusual Jack at the end.

An inverted version of Old Maid is also available. The game’s rules remain the same, but when everyone has exhausted their decks, the possessor of the odd card (the final Queen, Jack, or Old Maid card) is declared the winner.

Old Maid is occasionally played with a unique pack of cards in which all of the cards arrive in ’re part except for a solitary Old Maid card, the bearer of which is the loser at the end.