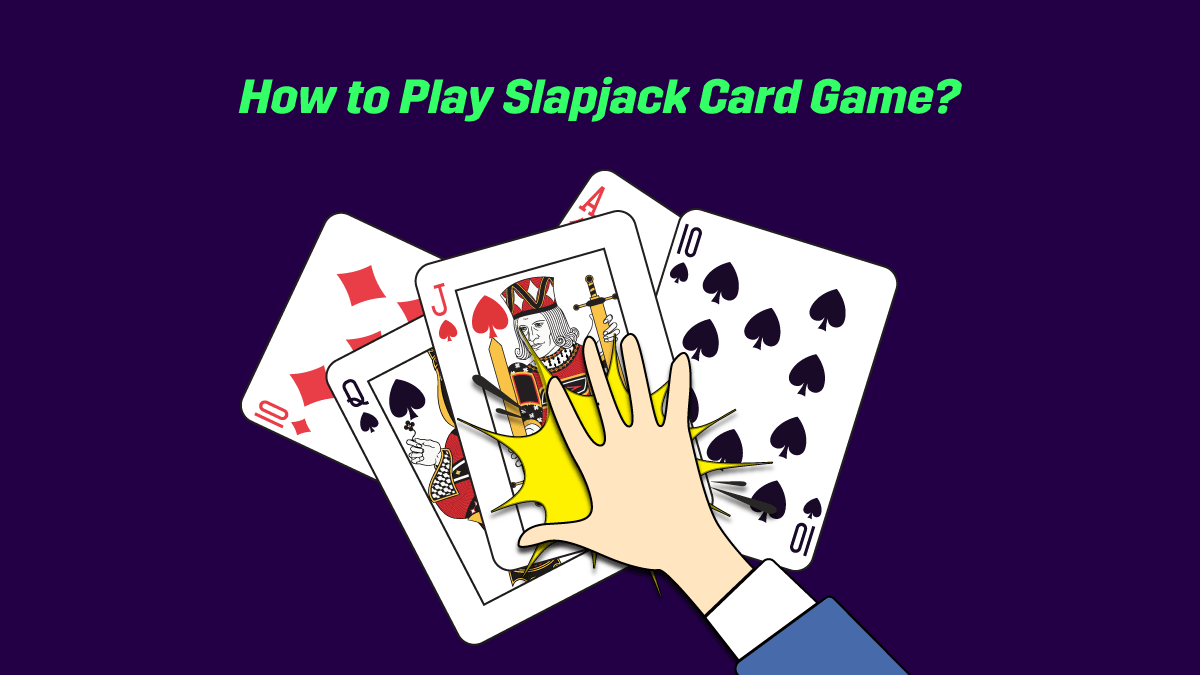 A fantastic game for children and adults alike and an entertaining card game for a family game night, the Slapjack game is as easy as its name. It literally translates to – slap the jack as you see it! Many of us may have already played fun card games as children, and slapjack is one of them.

This card game is bound to create nostalgia, but if you have never played the game before, Fret Not! Slapjack rules and gameplay are pretty straightforward, and even a child can learn the game within seconds. Here’s all about how to play slapjack and its rules; plus, we have also added some fun slapjack variations that will help you spice up the game. How quickly the players react to spotting the jack and slapping drives all the fun in the game.

Also known as Slaps, Slapjack is a popular card game among children, played with a standard deck of cards. The game is a blend of Egyptian Ratscrew (also known as Heart Attack) and Beggar my Neighbour games. Simple slap card games like Snap are also related to this game.

Slapjack is fast-paced and interactive and doesn’t involve memory or verbal skills. All that is needed is some excellent hand-eye coordination to win the game.

How to play Slapjack?

Slapjack can be played between 2 to 9 players using a standard deck of cards, excluding jokers. However, playing the game with a maximum of six players is more reasonable, or one could use two decks of playing cards with more players.

The object of the game is to be the first player to slap the jack as any player places a card at the center and win all the cards, leaving the other players with no cards in hand.

Before the game begins, a dealer is selected based on the draw of the lowest card. Each player draws a card from the shuffled deck, and the player who gets the lowest card becomes the dealer. The dealer deals the cards one at a time to each player until the entire deck has been dealt. The hands don’t necessarily have to be even, so if a player has one more card than the others, it wouldn’t matter. After the cards have been dealt, the players form a pile of their cards, face down, without looking at their cards.

When any player plays a Jack, every player slaps the jack. This is where all the fun lies. The player that slaps the jack first gets to pick the entire pile of cards that have been played. That player places the cards underneath their existing pile and shuffles them to form a fresh pile.

More often than not, all the players slap the jack as soon as a player plays it. The player whose hand is placed directly on top of the jack wins the pile in such circumstances.

What are the Rules of Slapjack Game?

If you start losing interest or getting bored of the basic slapjack game, you can spice up the gameplay with a few variations. Here are some of the variations you can consider playing.

Snap is another popular card game played amongst children where the goal is to be the first player to react when a pair of same-value cards are seen. This is one of the first card games that most children play using a standard deck of playing cards or cards that feature popular children’s TV characters.

The game proceeds similarly to slapjack, but as players spot two same-value cards, the first player to say Snap collects the pile. The player who collects all cards wins the game.

In the Irish Snap game, the objective is wholly reversed – you need to get rid of cards in hand to win the game. After the cards have been dealt face-down, the players place cards, face-up, one at a time, at the center, by calling out card ranks. For instance, the first player calls Ace, the second two, the third three, and so on. If the card played matches the card rank called out, the players slap the cards like in the slap jack game, and the last one to slap the pile has to collect the pile. The last player left with cards in hand is the loser.

Cabin 6 is a slightly complex game for the older demographic, played with a deck of 54 cards, including jokers. The cards are dealt face down, and the players turn over the top card of their hand. If two cards reveal the same number or a joker, the first player to call snap gets all the cards played. Players move on to turn the next card to continue the play. If a player runs out of cards, they have until the next turn to win some cards. The player with all the cards is the winner.

1. What happens when you slap the wrong card in slapjack?

If you happen to slap the wrong card in the slapjack game, you need to pay the penalty. You will have to return a card from your pile, faced down, to the player whose card you slapped incorrectly.

Yes. The slapjack game is very flexible regarding the number of players who can play the game. While the game is usually played between 2 to 4 players, up to 9 players can also play the game. If the deck falls short, many players use more than one deck.

3. How does the slapjack game end?

The game ends when only one player wins all the cards, and the other players are left with no cards in hand.