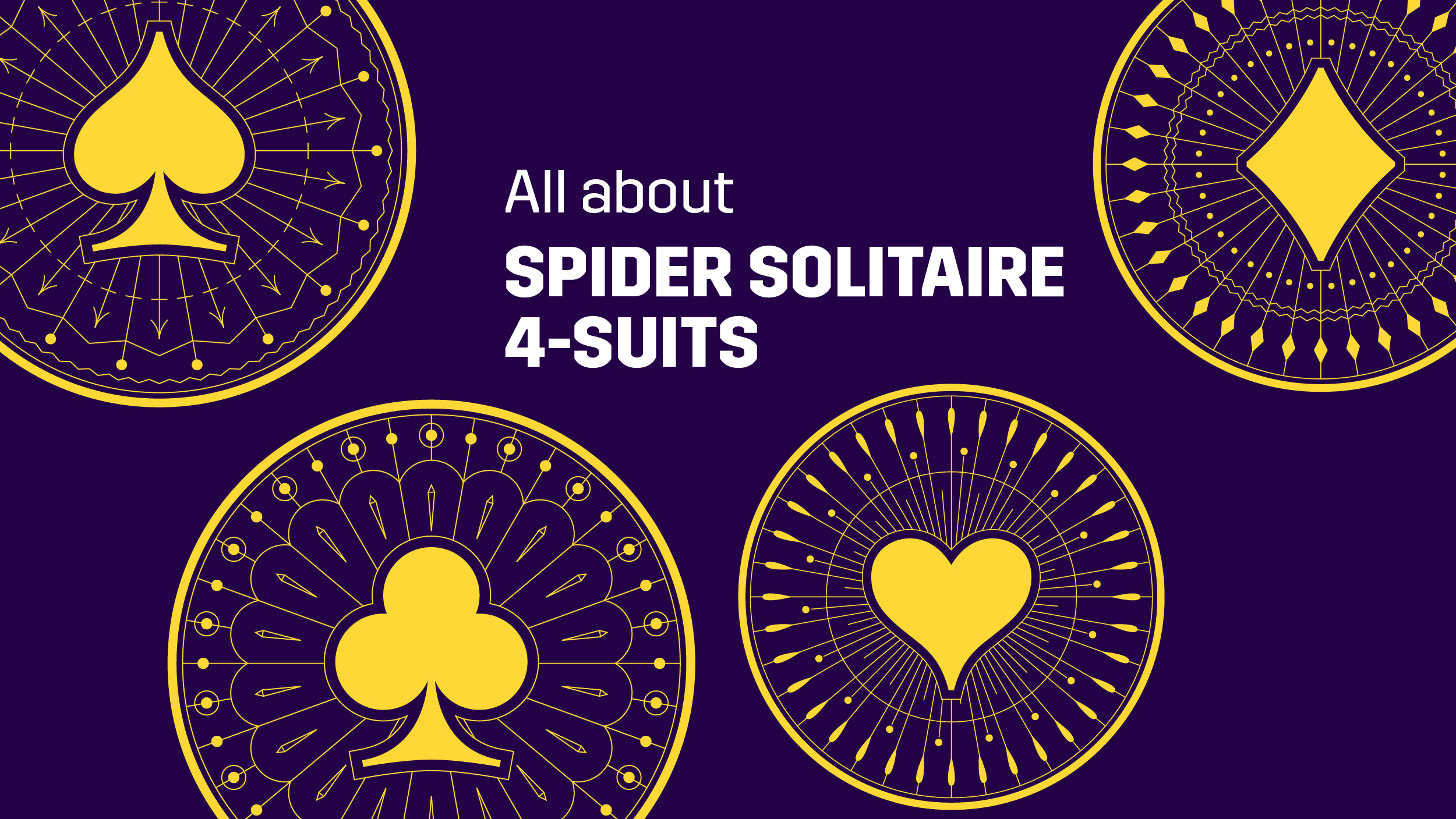 Since its inception, Spider solitaire games represented patience games. They’ve always been amongst the popular solitaire games that employ two decks. The game’s origins date back to 1949, with the name emerging from the spider’s eight legs – subtly referencing the eight foundation piles that the player must fill to win. Depending on the number of suits, you can play strictly for fun and relaxation (one or two suits) or put your brain through the ultimate test (four suits).

When you play Spider Solitaire 4-suit, you will be hard-pressed to come up with complete sequences of cards without overlapping suits that fail to match. However, don’t get frustrated. The initial objective of your gameplay should fundamentally be to expose as many new cards as possible–even if that means blocking out some of your best stacks.

How do you Play Spider Solitaire 4-Suit?

Your objective in a 4-suit Spider Solitaire game is to form sequences of cards based on suits in descending order from King to Ace. Once you create the relevant sequences, these sets of cards will vanish from the game and be moved to the foundation. Form all sequences from the game’s cards, and you become the winner. You can stack the cards regardless of the suit in descending order, but if the cards above are in a different suit, they will become inactive. Also, if you run out of moves to make, you lose!

Here are some helpful tips that’ll come in handy when you play:

-The order of moves matters. When executed right, it is possible to accomplish more than one objective simultaneously.

-Take into account everything that comprises any given game state, not just the number and position of unexposed cards.

-On certain occasions, it’s ideal not to move a card from the top of an Ace, although it’s possible. Also, remember that you cannot build any suit without the Ace, so concealing them too deeply leads to chances of backfire.

-The King is the only rank that can remove itself from the tableau without the player making a move with it. Treat the King with respect!

-A common false belief is that you should never place a King into the only vacant column. Sometimes, a King can block access to several cards, so moving it is the only option.

-Any card that does not have its prior-in-rank on top can be considered a resource or an asset. The exception here is the Ace, which doesn’t have any prior-in-rank. Once you move a card on top of a resource, it becomes used or spent. The underlying idea is to use available resources to best increase the winning chances.

When you choose to give up a vacant column either to turn an unexposed card or to extend a run (adding order), carefully inspect the game state before deciding. The ideal option would often be to add order to the game.

-For the select few who are out seeking the toughest of challenges, they can decide not to use the Undo option whenever you play online.

What percentage of 4-suit Spider Solitaire games are winnable?

It should be evident to every player that clearing a row is statistically imperative to win the game. The odds of doing so are approximately 5-8%. This means one in around fifteen to twenty games is winnable.

What is a good score in Spider Solitaire 4 suit?

Play Spider solitaire 1-suit on the MPL app now and win exciting prizes. Throw challenges at random opponents in 1v1 battles or fight it out for the top spot on tournament leaderboards. Unlike the 4-suit version, the game is more straightforward, fast-paced, and enjoyable!