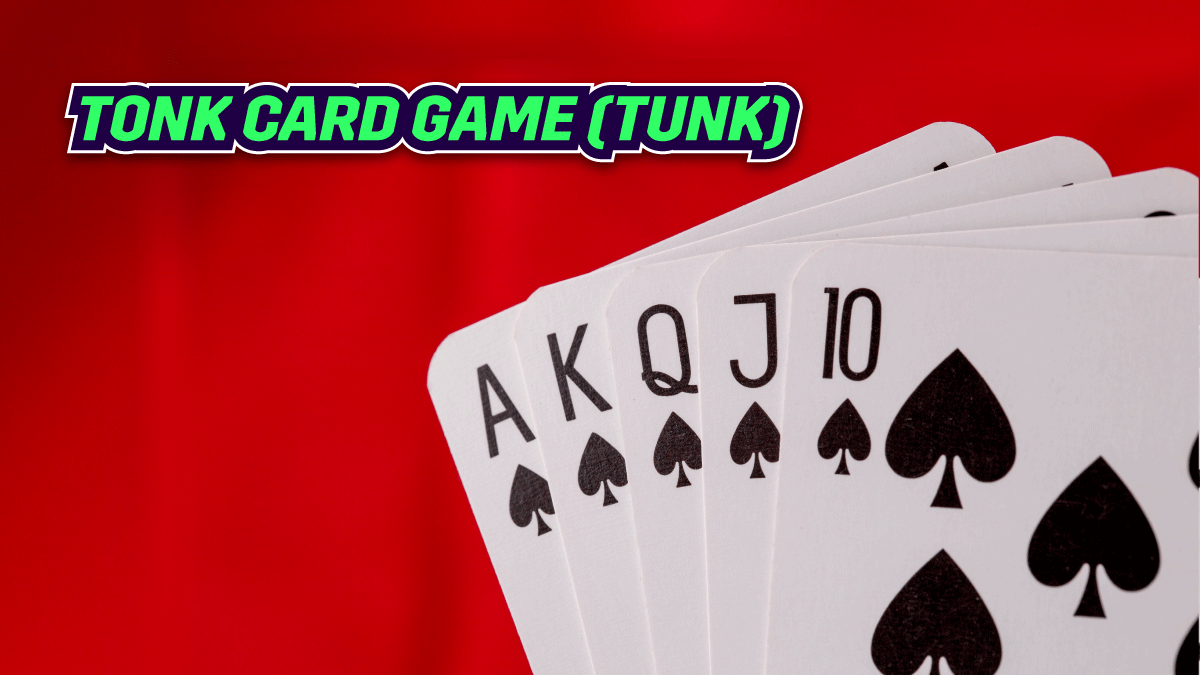 The tonk card game, also known as tunk, knot, and Texas tonk, is a matching card game that combines the elements of conquian and rummy games. The game originated in the USA and was quite popular in the 1930s amongst jazz and blues musicians in Louisiana. It was played during the breaks in salons and bars. During lunch breaks, Tunk was also played as a popular pastime in the military barracks.

Tonk is a relatively fast-paced game that can be played between two to four players. The game has numerous variations played by players from different regions. Therefore, if you play the Tonk card game with friends, it’s wise to come to a mutual agreement on house rules. You can follow the below tunk game rules and gameplay to breathe life into the game night without any clashes on your next game night.

Tonk is a 2 to 4-player game played for points or wagered money, with a standard deck of cards and two jokers. The stake (the amount to be paid to the winner by every player) is agreed upon before the game starts. The game includes several hands, and each player takes t ns to deal. The jokers used in the game are wild jokers meaning they can be used to substitute any card that a player may need to make a hand.

The object of the Tonk game is to form matching sets of three or four of a kind groups or sequences of three or more same suit cards. The goal is to get rid of the cards by grouping them into spreads. The first player to get rid of all the cards or the player with the least points at the end of the game is declared the winner.

Also Read: Popular Card Games to Play for All Occasions

Before the game begins, a dealer is selected. Each player draws a card from a shuffled deck to choose the dealer, and the player that draws the lowest-value card becomes the dealer. The dealer then reshuffles the deck and deals seven cards to each player in a clockwise direction.

The remaining un-dealt cards form the stockpile and are placed at the center of t e play area. The topmost card from the stock pile is turned and placed face-up next to the pile to form the discard pile. This card is also the up-card or the first card of the discard pile.

The deal passes to every player starting from the dealer’s left; new players should be seated on the dealer’s right.

How to Play Tonk?

The play begins with the player seated at the dealer’s left and proceeds clockwise. Each player can draw a card from the stockpile or the discard pile but must discard a card at the end of their turn. The players draw and discard cards to form spreads of sets and runs. Only the player at the left of the dealer can take the first upcard. If the ungrouped cards of the player count five or less, they can declare tunk or knock before discarding. That player then spreads the hand by separating the grouped and ungrouped cards.

A melded set of cards can have up to four cards of the same rank, including two natural cards (if there are jokers). For instance, J♦️ J ♠️ J ♥️ or 4♥️ 4♣️ 4♠️ 4♦️ form books. Players can also make a sequence with three or more cards of t e same suit. For instance, A♦️ 2♦️ 3♦️ 4♦️is a run. The players get turns to draw or discard, meld cards, lay off on the tunker’s melds, and discard.

A player goes out when they have melded all the cards in hand and gets rid of them. Every player gets one more turn to improve their hand, and the players evaluate their score after the end of the round.

A player ends the play in two ways:

Each card in the trunk game is worth the following points:

The points of the ungrouped cards in each player’s hand are counted at every turn. When players reach 100 points, they are automatically out of the game. The game continues until only one player remains, and that player w ns the game. If the stock runs out, the hands are dealt, and there is no score.

If any player scores 49 to 50 points in the initial hand, they must declare ‘Tonk’ right away and show the cards. In such cases, the other players pay double the stake immediately to the player.

If more than one player declares a ‘Tonk,’ the hand is a draw, and no payments are made to the players. The cards are thrown in in such instances, and the next player shuffles the cards to deal.

In some variations of the tonk game, there is no discard pile formed after the deal. The first player to begin the game draws the card from the stockpile, and the discard pile is formed with the first card they discard.

Further, holding a spread is not permitted in the game, and all spreads must be placed down on the table. As an exception, a player may hold three aces in hand.

Players can also win a double stake if they are able to make a second spread and get rid of the cards in hand without discarding. However, they only win a single stake by hitting spreads and getting rid of cards without discarding them.

In some variations, the hand is dead if the stockpile runs out and no payments are made.

Some game rules include that if a player is hit more than once in the same round, they have to wait on turn to play. Other variations to this rule include many waiting rounds. For instance, if a player is hit, they must wait for three rounds instead of one. While in some, being hit stops the players from going out low and prevents them from winning by getting rid of all their cards in the next turn.

In some variations, if a player is dealt a hand of 15 points or less, they must declare immediately and are paid a double stake by each player. However, if any other player has an automatic win with 15 or less, 49, 0r 50 points, the hand is thrown without any payment. In other games, if a player has a hand of 9 points or less, they are paid a triple stake by each player.

Are Rummy and Tonk the same?

Tunk is a type of rummy game that is played between 2 to 4 players with a standard deck of 52 playing cards. The games typically involve the melding of cards into groups and sequences, and the value of the ungrouped cards is counted to evaluate the points for each player, which is how the game is related to rummy. The objective of the trunk game is to have the least points at the end of the round, which is quite similar to the goal of rummy games.

How many cards can you use in a set or run?

A meld is usually formed with three or four cards at max; therefore, you must not use more than four cards while creating a set or run.

Can you hold aces in Tonk?

If Tonk got your attention, maybe you should also check out the online versions of popular card games such as 21 Puzzle, Cube Solitaire, and Spider Solitaire on the MPL app. These games are fast-paced, with an amazingly quick rewards system.