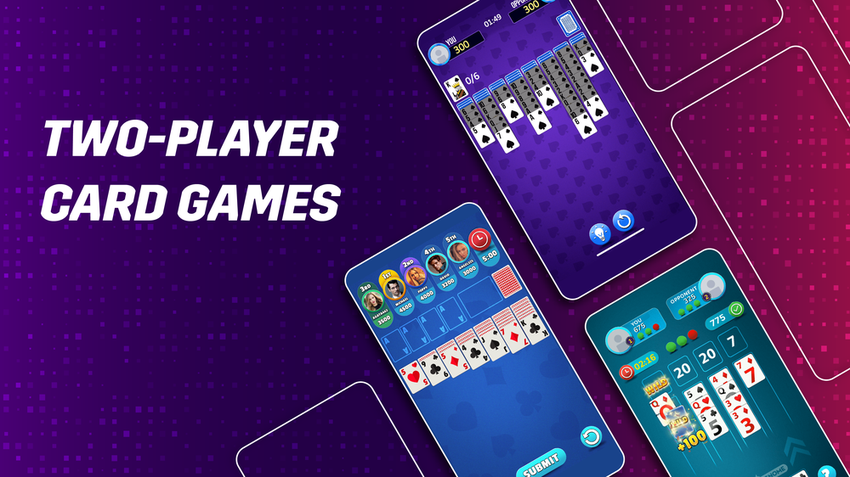 Turning a bland night into a fun card game night with just one friend around is quite possible with 2-player card games. Even if you have no other person around, you can still play many of these card games online against a real player. So, if you often find yourself surrounded by the urge to play card games but have no friends around, keep this list of two-player card games handy for maximum entertainment.

The 21 Puzzle card game is probably the easiest among all the 2-player card games on the list and is quite similar to the popular blackjack card game. If you know basic maths and can add numbers, don’t hesitate to play this fun card game. You can play free practice games or join the cash battles against real players to win cash prizes.

When you play the 21 puzzle card game online, you are matched with an opponent at the beginning of the game. Both players are given the same board, divided into five columns, and a stack of cards is at the bottom of the screen. The objective is to place the cards in the columns such that the value of the cards adds up to 21 or less. If the total value of the cards goes beyond 21, you will lose a life. After losing five lives, the game ends for the player. The players must continue to play for a higher score until the timer goes off. After the time ends, the player with the highest score wins the game.

Another popular two-person card game that you might have played at least once in your life is Solitaire. The solitaire card game has evolved from the tedious single-player desktop game to a fast-paced card game that can be played in competition with another player. If you are up for a quick solitaire game, you can play the free games or cash battles with online players on the MPL app. You can also play various other solitaire variants online, including spider solitaire, double solitaire, cube solitaire, etc.

The online solitaire card game usually lasts 4-5 minutes, and the objective is to solve the deck or secure a higher score than the opponent. The card game board is divided into a foundation pile, a tableau, and a stockpile. Like the original game, the goal is to arrange the cards in an ascending sequence of Ace to King of the same suit and place the set in the foundation pile. Depending on the variant, the players must move cards in descending order (in an alternating color pattern – for say, cube solitaire) before making the sets of the same suit in the foundation pile. In some versions, players also face the challenge of completing the objective within 1000 moves.

SlapJack is a fun card game that requires at least one other player as an opponent. The game is not available online; therefore, you can play this game in a physical setting with one or more players. SlapJack is an entertaining card game that only requires good hand and eye coordination to win.

The objective of the slapjack game is to win the maximum number of cards. The game is played with a standard deck of cards, and the players are dealt an equal number of cards (faced-down) from the entire deck. The players must play their cards quickly, one at a time, and slap the Jack card as soon as they spot it. The player who slaps the Jack card first collects the entire cards and adds them to their pile. The game goes on until one player wins all the cards.

Go Fish is one of the classic card games for two played with a standard deck of 52 cards. People of all ages, including children, enjoy playing this easy card game.

The two players are dealt seven cards each at the start of this fun game. The remaining cards form the lake or pond and are scattered facedown at the center of the table. After the cards are dealt, the players arrange their cards according to the number or royal order of Jack, Queen, and King. A player then asks the other player if they have a card of a specific number (provided that the player himself has at least one of the cards he is asking for). The second player must give out all the cards of the same rank to the first player. If the second player doesn’t have the cards, they can say Go Fish, making the first player draw a card from the pond, and the turn passes to the second player to ask for cards.

Crazy Eights deserves mention in the two-person card games category. It is a simple game that’s easy for kids and challenging enough to keep the adults hooked. The goal is to get rid of all the cards in your hand to win this fun card game.

All the 8s in the game are wild cards, hence the name. The players can use these wild cards anytime during the game as a substitute for any suit. The player to play all cards in hand before the opponent wins the game.

Spades is a popular trick-taking card game usually played between four people in a partnership but can easily be included in the 2-player card games category. The game is played using a standard deck of 52 cards with Ace as the highest, 2 as the lowest, and Spades as the trump suit. The first player to reach 500 points is the winner.

In this two-person game, players aren’t dealt cards; instead, they draw two cards at every turn from the deck. The first player draws a card and decides to keep it or discard it, or discard or keep the second card, followed by the second player. The process continues until the entire deck has been distributed amongst the players. Then, the players make bids between 0-13 based on their hands.

The second player must follow the suit or rank of the card played by the first player and try to win tricks. If a player wins the exact number of bids, they get 10 points for each hand and one point each for every extra trick won.

The last on the list but certainly one of the most popular card games for two includes poker. Poker has two widely played variants – Texas Hold’em and Omaha Poker. Learning how to play poker takes significant time and effort, but starting with a 2-player table is recommended for beginners rather than playing poker with more players.

In poker two-player card game, one player (the dealer) is the small blind, and the second player is the big blind. The second player is dealt the first card, and the first player gets the second card. The game is played in 5 rounds, and the player with the small blind plays first. Each player receives two hole cards, and five community cards are placed face-up for them in each round. The players have an option to check, raise, bet, or fold after each deal. The objective is to make the best hand with five cards to win the game.

If you love playing 2-player card games, you only need to keep a deck of cards and this list handy. You can play most of these card games online with real players to increase the challenge of the games. The list also includes several entertaining two-player card games that you can play with a friend in a physical setting.