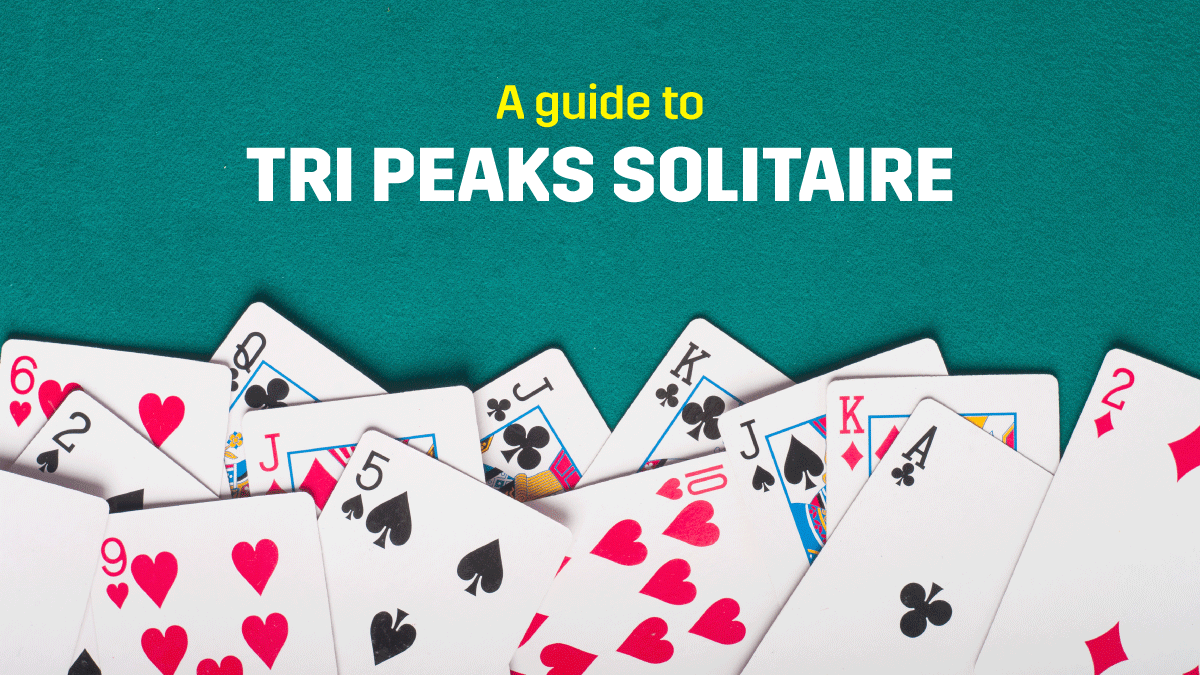 Tripeaks Solitaire is a fun, single-player card game with straightforward but equally challenging gameplay. It derives its name from the shape of cards laid out in the tableau. They are uniquely positioned, creating three pyramids of overlapping cards. Since each pyramid possesses a peak, we get Tri-Peaks or Triple Peaks.

Like other Solitaire games, the objective is to clear all the cards from the tableau. However, how you go about it is pretty different from that of Spider Solitaire or Klondike. Rather than creating complete sequences by suit and order, you now need to create mixed sequences alternating between cards with one number lower or higher than the previous one.

Tripeaks Solitaire uses a 52-card deck with no wild card (Joker) inclusions. The game board comprises the following:

You can transfer a card onto the waste pile if it ranks one lower or one higher than the top card on the latter. For instance, if there’s a 7 on the discard pile, you’re welcome to move to a 6 or 7 there. Initially, the discard pile is empty, and you are allowed to move any card onto it. You are also allowed to “turn the corner,” which means go K A 2 A K; you can place an Ace on a 2 or a King.

When you have zero cards in the peaks that you can move to the discard pile, you can pick a card from the stock and flip it over to the discard pile. You can do this only once, i.e., going through the stock – resets do not apply. In an ideal scenario, do not use the stock unless you’re sure you can’t move any cards from the peaks.

You win the game by moving cards from all three peaks to the discard pile. The cards that remain in the stock at the finishing time do not count.

When you cannot move any cards from the peaks and have zero cards left in the stock, you lose the game. The online version of the game usually indicates this to the player, but you can always use the Undo button and attempt to try some other methods.

How to Score in Tri Peaks Solitaire

Your score in Tri Peaks Solitaire is based on the number of cards left at the conclusion of the game. You essentially win by having zero cards left. The game also considers the number of moves you make to reach a winning outcome, so a win with lesser moves is deemed better. Some online versions of the game track the top results for a number of games, and you’ll be notified if your win record fares better than the rest or if you’ve breached a new record.

As per Wikipedia, Robert Hogue invented the game in 1989. He conducted a statistical analysis on the game’s original version, which said that over 90% of all Tripeaks solitaire games are solvable.

As an alternative to deconstructing each peak at a time, approach the tableau row-by-row. By doing so, you’ll not have many overlapping cards each time, increasing your chances of creating sequences since you have more cards that face forward.

You often find yourself stuck between having to pick between two or more cards while building a sequence; see if any of them can unlock a face-down card. If yes, that option is what you should go for!

While others may leave with the same tableau state for the subsequent move, the one that exposes a card adds a new, alternate path for the game. Even when there are no sudden advantages, you may need the newly exposed card for the upcoming sequence, and perhaps, it’ll help you avoid using the stockpile.

The longer your sequence, the more cards you expose and discard without picking from the stockpile. This is what you need to do as much as possible until the game ends. Remember that you needn’t stick to a single direction when you build a sequence. You can always go high or low whenever you feel like it. Try to strategize your moves (in advance) and maximize their potential. Also, try playing with different combinations of numbers to see if you can keep extending the sequence.

This is one of the most valuable and practical Tripeaks Solitaire tips if you are looking to increase your winning chances. This game only uses a single deck of fifty-two cards. Therefore, if you are skilled enough to keep track of discarded cards, you may get a clearer idea of which ones still face down or remain in the stockpile and accordingly plan your sequences.

For instance, if all the 5s were discarded and you still have a 6 on the tableau, you can only move it by pairing it with a 7. If you keep using sevens to go high and pair them with eights, you may eventually run out of cards to get rid of the 6 from the peak. This may lead to you losing the game since you cannot remove it.

If you find Tripeaks challenging as a beginner, why not try some classic solitaire games such as Cube Solitaire and Spider Solitaire 1-suit on the MPL Pro app? These games are timed, and the winner is decided based on scores. If you participate in tournaments, you need to clock a high score in as many rounds as possible. The winner gets to take home exciting cash rewards. Don’t wait – download the MPL app right now!