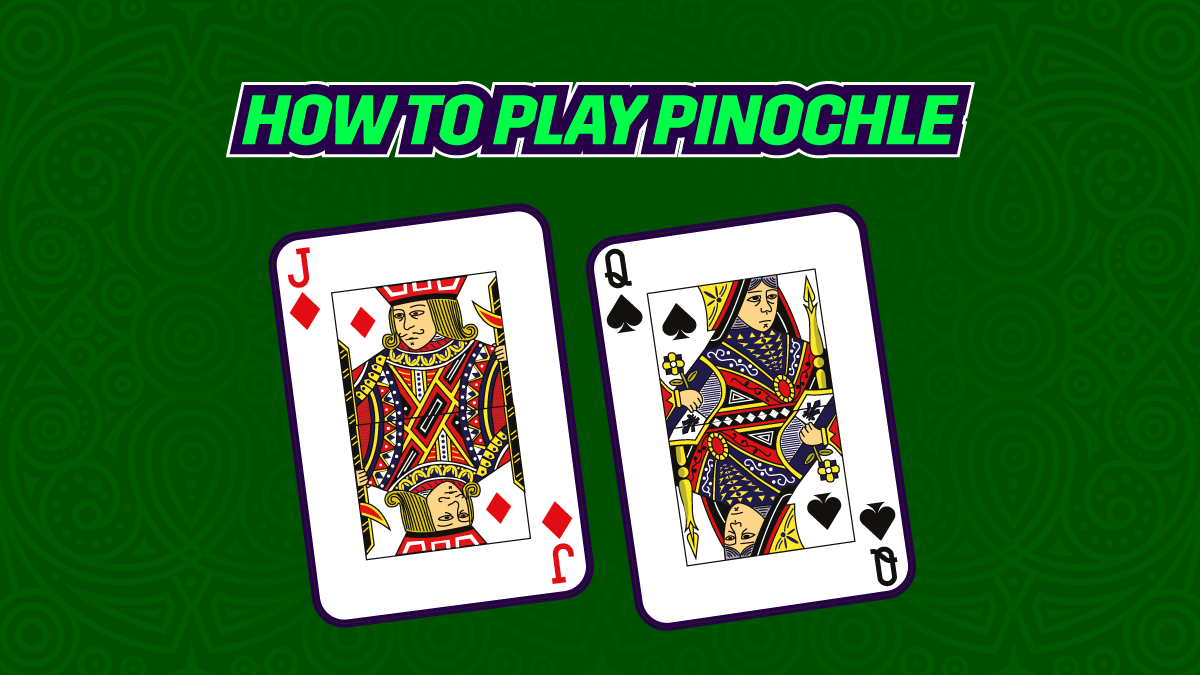 Pinochle, also known as pinocle or penuchle, is one of the most popular trick-taking card games developed and played in the United States. The game was derived from another card game called Bezique, where players won tricks by melding cards and scoring points. This card game comes into the trick-and-meld category of card games that unfolds in three stages: bidding, melding, and tricks. The standard variation played today is the partnership auction pinochle.

If this game piques your interest, read on to learn a little history about the game and then understand the rules and gameplay. The next game night you have with friends or family, you will be able to boast your skills in the game of pinochle.

The fun pinochle game originated about 150 years ago and is believed to have two origins. It either evolved from Bezique or may have originated in the Swiss and later became Binokel, a South German game descended from Bezique. The game was brought from Europe to the US in the 19th century.

The name means eyeglasses or two eyes and refers to a myth that the game was developed from a deck of cards in which the Jack of Diamonds and the Queen of Spades were portraited, revealing only one eye each.

Pinochle is a trick-taking card game that involves the melding of cards. The game is usually played between four players in two partnerships (partnership pinochle) or between three players playing individually (cutthroat pinochle). It is played with a 48-card pack, with two sets of 9s through Aces. A round includes six phases – dealing, bidding, exchanging, melding, trick-taking, and scoring. The players score points in two phases of the game – the melding phase and trick-taking phase.

The game’s object is to win tricks by melding cards into combinations of high scoring points to score the value of cards taken in on tricks.

The value of cards melded during tricks are as follows:

Also Read: How to Play Spades with Jokers

When every player has 12 cards in hand, the bidding round starts from the player at the dealer’s left, followed by other players in a clockwise direction. The players bid the number of points their team can make in that round, with the minimum bid being 20. Every player must bid higher than the previous bid or pass (10 or 20 points higher). The bid that is passed by every player becomes the contract for the game, and the player who made that bid decides the trump suit. The team that made the contract also trades three cards between each other before the game begins.

A non-dealer leads every trick, and the winner of that trick leads the next trick. If a player leads with a trump, the player wins the trick unless another player plays a higher-value trump card. If the player leads with a card of another suit, they win the trick if no other player plays a higher card of the same suit or a card from the trunk suit.

Note: Following suit is not necessary within the game; therefore, the leader has the option to lead with any card, and the opponent can play any card.

After the trick ends, each player (starting with the winner) must draw a card from the top of the pile and to have 12 cards in hand.

Each player melds the cards in hand for points. Pinochle has three classes of melds, and a card can be a part of more than one meld of different classes but only a single meld of a given class.

The players make melds by placing the cards face-up on the table, and the cards remain there until the player wishes to play or till the stock is exhausted.

Here are a few rules to melding:

The points for all the melds are evaluated and added to the score of each team for that round.

The game features a few variants for a different number of players. The most commonly played pinochle variation is the partnership pinochle game, where four players play in teams of two. Similarly, a two-handed variation is for two players, and three-handed is for three individual players. Take a look at some of the popular pinochle variants:

The two-handed pinochle game is the original version of this classic game from which partnership, auction, and other variants have been derived. This game is closely related to the original Bezique game, with a difference in the scoring rules.

The two-handed game is played between two players where 12 cards are dealt to each player in sets of four, and the remaining 24 cards form a stockpile. After winning each trick from the first 12 tricks, the players score one meld and can even use melded cards to win tricks. Traditional trick-taking rules are used for the last 12 tricks.

There are further variations even in the two-handed play where no cards are dealt initially, and the players must draw the top card of the widow from the face-down deck.

Cutthroat pinochle is similar to the three-handed pinochle variation with a simple modification. It is a 3-player game where players play individually rather than in teams. In this variation, each player is dealt 15 cards in sets of 3 cards, and after the first round of three cards, the fourth set is placed face-down, forming a widow.

The object of each deal is for the highest bidder to make the exact same points and for the other two players to prevent the highest bidder from making the points. The highest bidder gets the widow, melds cards, and discards any 3 of the un-melded cards. The play proceeds based on the melding and trick-taking rules of the classic pinochle game.

A partnership pinochle game is played between four players in two partnerships, with partners sitting opposite to each other. The cards are dealt in sets of three cards over four rounds, and the team objective is to score 100 or more points over as many deals as necessary. Similar to cutthroat, the points are scored for making melds and tricks.

The partnerships make a bid with the minimum point score they will make with the trump suit they choose. The basic partnership game has witnessed immense popularity by double-deck pinochle, where the 9s are removed from the pinochle decks to make it an 80-card deck. The minimum bid is 50 in this variant and winning the last trick gives two bonus points. The gameplay and rules of the partnership pinochle game have been discussed throughout this blog.

Check Pinochle is a gambling variant of the cutthroat game. The rules are quite similar to that of cutthroat pinochle with the addition that players keep track of checks. In essence, checks are specialty points that correspond to the cash value, which is determined by the players before the game starts. In the check variation, the players win checks in the below ways:

Is pinochle a hard game to learn?

Pinochle is an easy card game to learn and play. It takes only a few minutes to learn the basic rules of pinochle. All you need to learn are the card values and different melds to start playing the game.

Can you play pinochle with 2 players?

Indeed! The original version of the pinochle card is played between two players. The card ranking and the rules in a two-handed game may differ slightly, but the game is played in a similar manner as in a four-player or three-player pinochle.

Is pinochle similar to Spades?

Pinochle is similar to Spades, only in the context of trick-taking and bidding. However, Spades doesn’t include melding cards, and the decks used are also different.