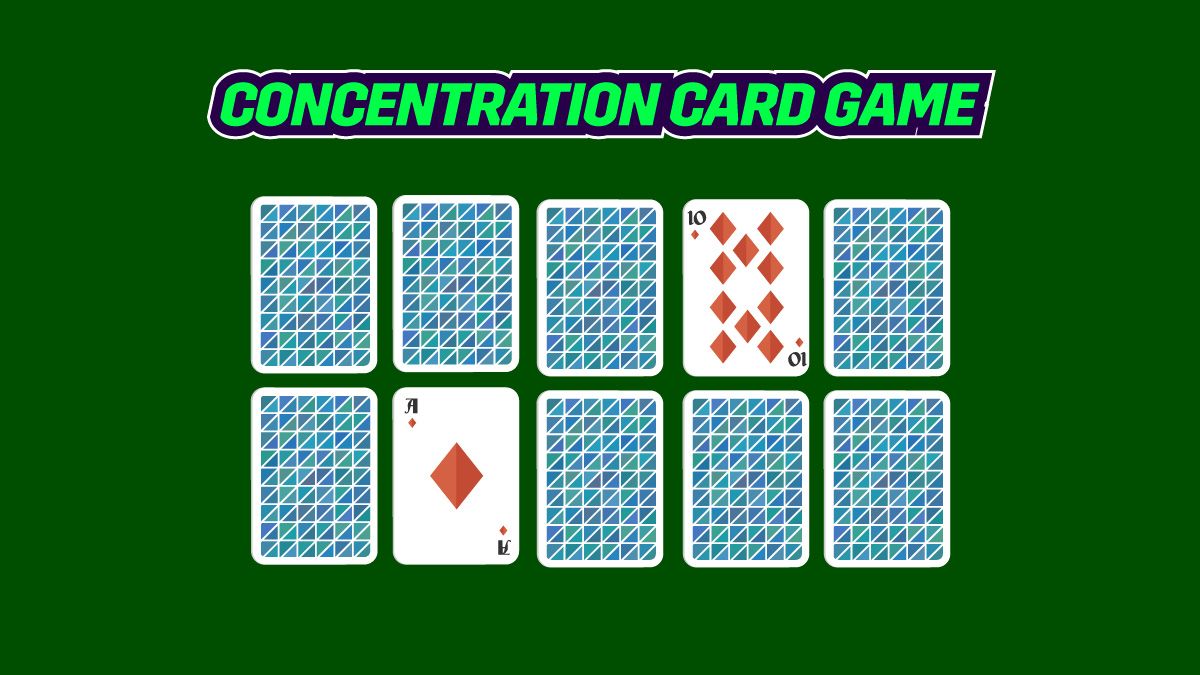 What is a Concentration Card Game?

If card games are popular amongst people of all age groups, it is for an apparent reason. Countless card games keep players entertained, and once they get dull, there’s always at least one variation of that game. One such game great for card game lovers is the card game – Concentration. The concentration card game is a memory card game played with playing cards where players match cards. The game also goes by several names such as Memory, Matching Pairs, Match Up, Shank, Match Up, etc., and is popularly played across the globe.

The game is enjoyed by children and adults alike, and although it may seem easy, it can get challenging if your memory isn’t sharp. The idea behind this memory game is to match two cards, or in other words, find a pair, by remembering where you saw a similar card. Matching cards is a perfect game to pass your time with friends or play with children to sharpen their minds. It can be played between two players to more than five players. Here’s a small guide on how to play concentration card game quickly.

How to Play Concentration Card Game?

The concentration card game is played using a standard deck of 52 cards, and players can even include two jokers in the deck. If a larger group of players play concentration, they can choose to play with additional packs of cards.

The game’s object is to collect the most pairs of cards of the same rank—for instance, two Kings, two threes, etc. The player with the highest number of pairs wins the card game.

Before the game begins, the order of play is determined. Each player draws a card from a shuffled deck. The Aces are the highest cards, and Deuces are the lowest cards. Depending on each player’s card, they arrange themselves from highest to lowest in a circle. If there’s a tie between players, those players need to redraw.

Then, a player shuffles the cards and spreads them out on the surface with call cards face-down. The cards are placed in a way that no two cards touch or overlap each other.

The game begins with the player that draws the highest card, and the turn continues clockwise. The first player flips over any two cards face-up in random order. If the two cards flipped over do not match each other, they are flipped back face-down. However, if the two cards match, the player collects the cards from the grid.

If a player matches two cards, their turn continues until they fail to match a pair.

The next player then takes a turn to flip two cards and find a pair of the same rank. The game proceeds in the same way until the players have matched all the pairs from the grid.

At the end of the game, the player with the most pairs wins the game.

Note: Two cards can only remain flipped face-up for only 5 seconds, after which they must be dipped back face-down. Every player must be able to see the cards flipped up.

Concentration card game is easy, but no player can deny gaining access to a handful of strategies to increase the chances of winning. Here are a few strategies to win the matching card games:

Here are a few other variations you can enjoy of this matching game:

Any Color is an excellent game for children. The object is to match numbers regardless of the color and find pairs.

The gameplay of One Flip is the same as concentration, with the difference that once a player finds a match, they cannot take another turn to find more matches.

For players looking for an even more challenging and longer version of the matching card game, Two Decks is the ideal game. In this game, the player shuffles two packs of decks and places them in eight rows of thirteen cards or nine rows of twelve cards if jokers are included. In this game, the matching pairs must be identical, of the same suit and same rank, since there are two decks. For instance, 7♠️ can be paired only with 7♠️.

As the name suggests, Two Decks Duel is played using two decks of cards but only between two players. This makes the game more challenging. In this game, each player shuffles the two decks and lays the cards in four rows of thirteen cards in front of each other. The players must not see each other’s cards. Then, one player flips one card from their cards, and the other does the same. If the cards match, they are removed; otherwise, they are flipped back.

In the Fancy card game, the dealer can choose to lay the cards in any formation, such as a triangle, circle, or a pyramid. The rest of the gameplay remains the same.

In this game, the cards are laid out randomly on the surface without any shape or pattern. This makes the card locations difficult to memorize.

Double Decker Checkerboard is an easier variant of the Two Decks game, played with two sets of cards but a different back design. The difference in the back design makes locating the cards in the grid easier and increases the chances of matching pairs.

Undoubtedly, card games are not only fun to play but are also a great mental workout. Take any card game, for that matter, from games as challenging as poker to games such as the concentration card game, and you will always find immense benefits. So, next time you’re between a group of friends, you know which game to play to test each one’s memory.