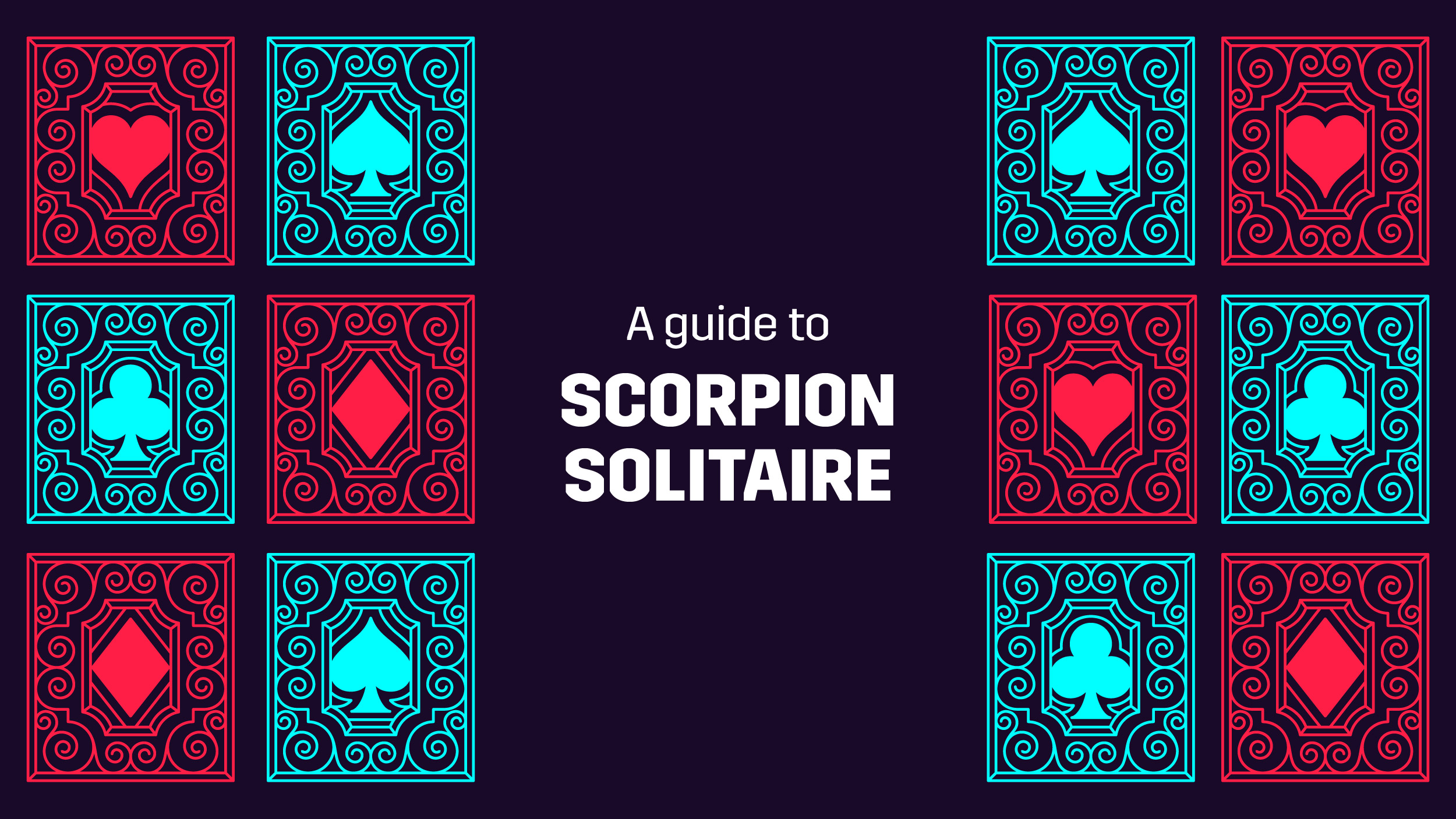 If you believe that Spider Solitaire packs a solid bite, wait until you play Scorpion Solitaire card games and feel the ultimate sting!

As with most solitaire games, the game involves arranging the cards in descending order columns, from King to Ace. You can move any cards in the column as long as the first grabbed card is facing up. Subsequently, you place this card (or column of cards) on another column where the bottom card is of a similar suit and one value higher than the first grabbed face-up card.

Though there are several Solitaire variants that you can play, we will focus on the Scorpion solitaire game in this article. We’ll recommend the game to everyone familiar with Klondike but is seeking more thrills and variations. Though some say that Scorpion solitaire has more in common with Spider Solitaire, the gameplay style is more similar to Yukon. Like any worthwhile Solitaire variant, the game is typically a puzzle with a simple objective.

While there are some named variants such as Three Blind Mince and Wasp Solitaire, this guide will take you through the basic version of the game.

We play Scorpion solitaire with a standard deck of fifty-two cards with the Jokers not used in play. While you can also use novelty or custom-created decks to initiate Scorpion Solitaire, play with the standard deck first to understand the concepts of suits and card values.

Once you shuffle the deck, you have to form the tableau by dealing seven columns of cards, each with seven cards, totaling forty-nine. The three remaining cards, known as reserve cards, are kept aside for later use. Except for the first three cards of the first four columns, which are dealt face-down, you’ll deal the cards face-up.

The game is unique because it doesn’t employ a discard pile or use foundations like most others. Instead, what you attempt here is to sequence the tableau piles. Even if that sounds relatively straightforward, Scorpion solitaire is undoubtedly among the most challenging card games, with many considering it similar to Spider Solitaire 4-suit.

How does Scorpion Solitaire work?

–Move one (or more) face-up card between tableau piles: You can move any card sequences from atop a pile onto any other where the top card is the same suit as the moved card and is one rank above.

-Dealing from the tail: You can deal the final leftover cards to the first three piles. Conventionally in Scorpion, you can only deal the tail when you’re done with your initial moves. However, in some online versions that offer a “Clear completed runs” option, you can deal from the tail at the time of your choosing, rendering the game somewhat more straightforward.

–Turn over a revealed face-down card: Whenever a face-down card is exposed, it needs to be turned face-up. It is an automated feature in the online versions.

–Use the “Undo” option as long as you need it: Call it a boon in the virtual version but the undo button is a blessing in disguise. However, each undo might count as a new move, so if you’re trying to solve the game in the least number of moves, you should be careful about using undos.

–Discard completed runs from the table: In the traditional version, a completed run stays on the table until the game concludes, making the game more challenging as the run needs to be played around. In the virtual/online version, the option to select completed runs and move them to the foundations is automatic. It creates more space on the table, enabling you to create more runs. If you’re opting for a trickier challenge, you may disable this option.

Read More: All About Klondike Solitaire

-Once every card is face-up, the game should be easily winnable (so long as it isn’t stuck in one of the situations provided below). The idea is to discern sequences of moves that turn over a card.

-There is no need to fill empty spaces until you necessarily have to.

-Scorpion can become blocked in two ways. Get yourself familiarized with these patterns to refrain from moving cards into a dead-end scenario:

Is every game of Scorpion solitaire winnable?

Scorpion is essentially a variant of Russian Solitaire. Researchers and experts give a chance of winning Scorpion as one in (eight to) ten, or around 10-12% of the games played. But don’t be bothered by the low winning percentage, as this is amongst the most exciting solitaire games you’ll play.

If you’re a fan of the solitaire card game category, we have a couple of fun, thrillingly-paced versions available to play on the MPL app – Spider Solitaire (1-suit) and Cube Solitaire. Trust us when we say that you’re going to love them. They’re pretty addictive, but the rewards are entirely worth your time and efforts!