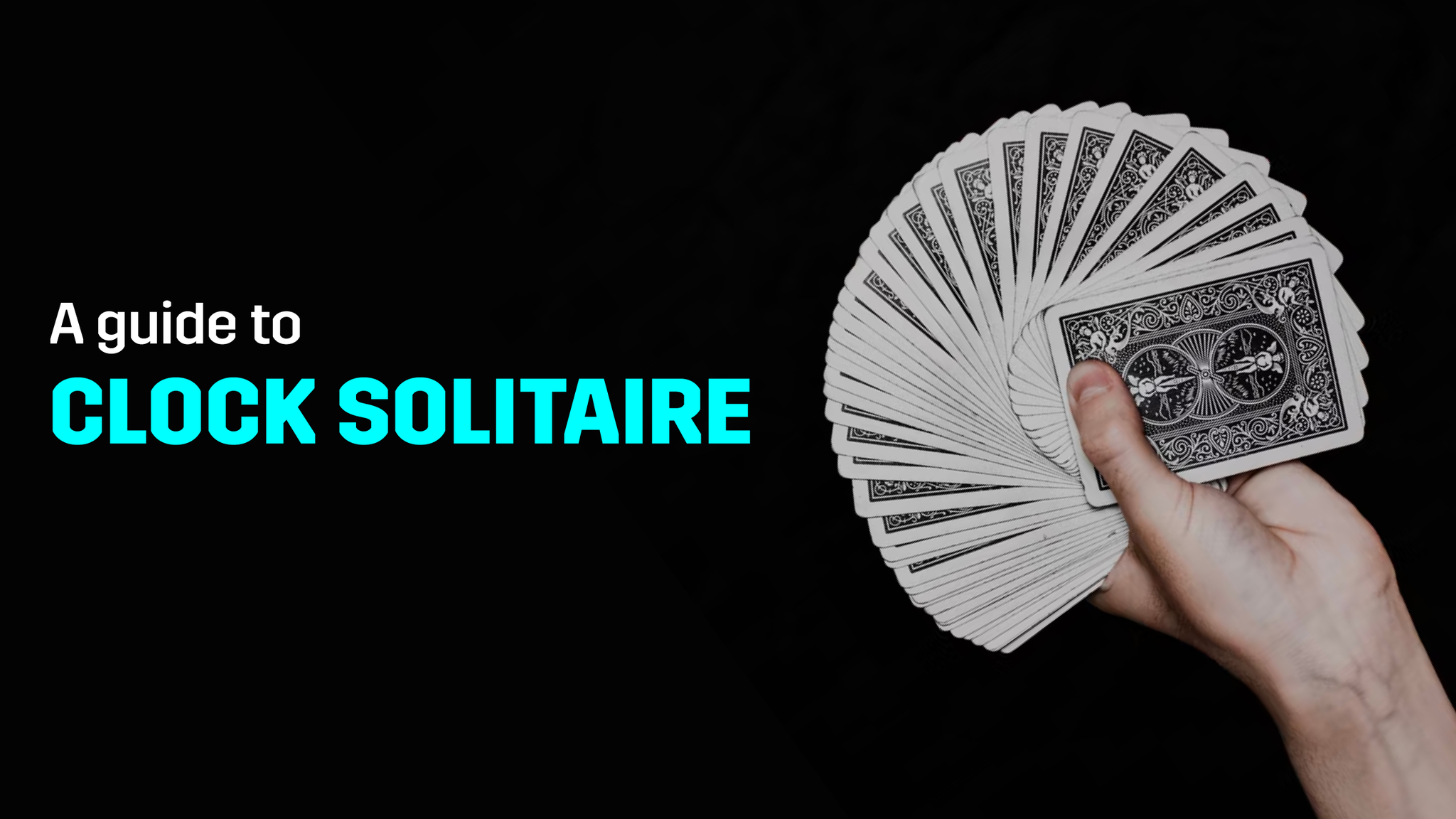 Clock Solitaire (alternatively referred to as “Clock Patience”) is a fast-paced card game that’s based entirely on luck. Whether or not you complete a deal depends on luck and not your skills.

Clock Solitaire might appear like the undemanding variation of the solitaire game on the surface, but that isn’t the case. It is one of the most challenging card games in history. This matter-of-fact single-player game also gets the names Travellers, Four of a Kind, and Hidden Cards.

Your objective in Clock Solitaire does not deviate far from its name. You need to arrange cards in the shape of a clock, complete all thirteen sets with four-of-a-kind sets, and then expose the King as your final move.

The game has only a few rules, making it even more fascinating. The first and fundamental rule is that you need to slide all cards you play under the stack they belong facing up. The second rule involves all thirteen piles becoming four-of-a-kind before the fourth king gets exposed. You lose the game if you reveal the fourth king and yet have some cards, not in their face-up piles.

While playing Clock Solitaire, chances are, you’ll also bump into another variation called Watch Solitaire. This game has comparatively more lenient rules. Here, if a player happens to reveal the final King, they can replace the same with a face-down card and continue playing till the final King reappears. There’s a higher chance of winning in this variant.

Like most other traditional card solitaire variants, you require a standard deck of fifty cards, minus the Jokers. Keep in mind that every card needs to be present to win Clock Solitaire. So, ensure that you count the cards and confirm that there are fifty-two altogether. The tableau will already be laid out for those playing online.

In this article, we’ll focus on those who enjoy playing card games in a physical setting. Let’s look at how to set up the tableau. The game requires plenty of space as you need to assemble cards like a clock. Therefore, always prefer a flat, solid, and large surface for playing. A desk or tabletop can suffice, but you can play on the floor if that option is unavailable.

Commence dealing the cards in a methodical order. To begin setting up, you need to deal twelve piles of four cards, all facing downwards in a circle. The twelve piles should typically appear akin to the layout of numbers on a clock, i.e., from 12 o’clock to 11 o’clock. Ensure that in each pile out of the twelve, you have four face-down cards.

Once you deal cards in this order, you’ll have four more cards remaining. Put all these cards in the middle. This constitutes your 13th and final pile. The cards in this section should also be face down. When finished, you’re ready to begin playing the game.

How to Play Clock Solitaire

The gameplay is relatively straightforward. Since it doesn’t require special expertise, you can pick it up quickly. Play the first card from the 13th pile in the middle to commence the game. Flip it over and see the number on it. The card’s number determines where it has to be placed among the other twelve piles. If it’s an 8, it must go to the 8 o’clock position.

This is how you should go about card movement in Clock Solitaire. Each card has its unique position on the tableau. For instance, if you play a Queen, it goes to the 12 o’clock pile. What if it’s a Jack? It goes to the 11 o’clock pile. Aces, as you can predict, go to the 1 o’clock pile. The exact format is followed for the rest of the cards. Only Kings can go to the center pile.

While turning a card, players should remember to slide it underneath the stack it belongs to, facing up. Where you play a card determines the next move. If you play an 8 of spades from the center pile and place it beneath the 8 o’clock stack, your subsequent move will be to play the top card on the same pile. If it guides you to the 1 o’clock pile, that becomes your next move.

Simple, right? Keep playing cards and placing them where they need to be until all cards are in their belonging positions.

Read More: Everything About Pyramid Solitaire

How to Win Clock Solitaire games

You win the game when all cards are placed where they supposedly belong. In essence, this means that all twos should be in the 2 o’clock pile, the threes in the 3 o’clock pile, and so on. The final card to play should be the King, which must be your last move when you push it under the middle pile. Once this is done, you win your game of Clock Solitaire.

On the other hand, if you expose all the King cards first and fail to turn the other cards, you will lose the game. As remarked earlier, this game purely depends on luck and not much else. So, don’t fret if you lose your first few games. Just shuffle your cards and give it another shot!

The chance of winning Clock Solitaire is 1/13, or one in thirteen games can be won. The reason this happens is that each of the 52! possible sequences you might come across in the game are equally likely, and you will succeed only if the final card in the sequence is a king, and this becomes true with the probability of 1/13.

The point to remember here is that each time you turn up a card, it is likely to be any cards you haven’t come across yet. The fact that you take it from a specific spot in the layout doesn’t matter. Instead of laying out cards in advance, you can go through the deck, pick the top card, place it where it belongs, and follow it all through.

You lose if you get the fourth king before you come to the end of the deck. In case you feel lazy, you can simply look through the deck without having to put cards where they belong. You can take a look at the bottom card – if it isn’t a King, you lose. Viewed from this perspective, Clock Solitaire wouldn’t be the most exciting card game. Its fundamental practical interest lies in revitalizing the job of sorting a card deck into various ranks. However, from a theoretical standpoint, it holds interest as it sheds light on the combinatorics of spanning trees in a graphical representation.

There’s a good chance you’ll find Clock Solitaire interesting regardless of its dependence on luck. Give it a try and see if it’s the kind of card game among other solitaire games that you’ll enjoy. If not, you can always try Cube Solitaire or Spider Solitaire 1-suit on the MPL app. You can play these games for fun or compete with online opponents to win cash prizes!