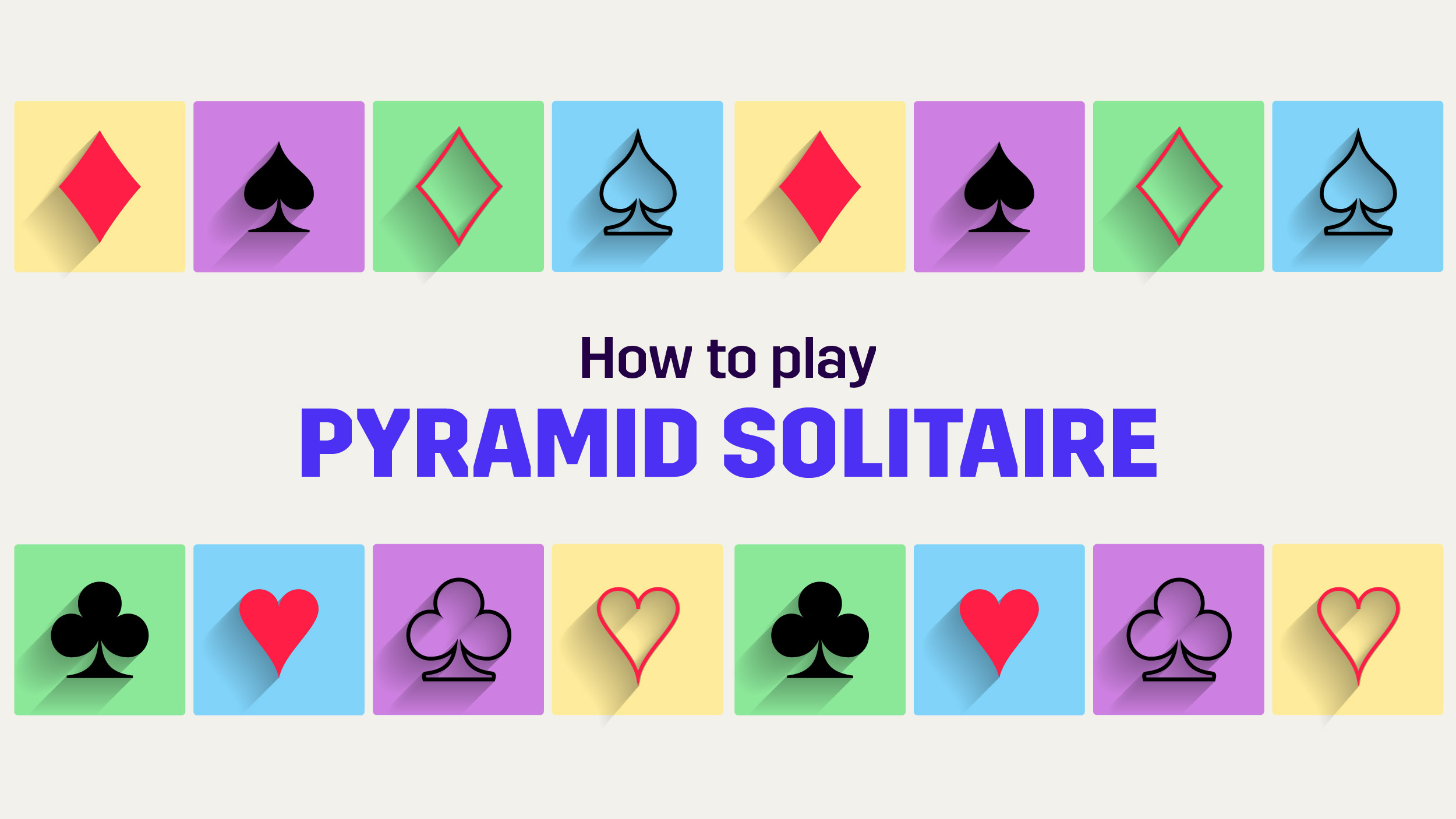 Card solitaire, or Patience (also understood as “solitaire with cards”), primarily involves arranging cards in a specific layout and sorting them based on different rules. The most widely played solitaire card game is Klondike. Other popular variations include Cube, Yukon, Spider, FreeCell, and Pyramid Solitaire. Now, let’s get to know Pyramid solitaire better!

What is Pyramid Solitaire?

Pyramid Solitaire is a game that one player can play wherein the objective is to discard all fifty-two (52) cards into a discard pile and destroy the pyramid in that fashion. Technically, you win the game when the pyramid vanishes, so not all cards will have to be moved to the discard pile.

When you discard cards, you should do it in pairs, and each pair must equal a value of thirteen (13). We will get into card values later in this article, but keep in mind that discarding cards whose total comes to thirteen is essential in uncovering more cards in the pyramid you can discard.

The Objective of the Game

Your goal in Pyramid solitaire is to move card pairs that comprise a value of thirteen (13) from the pyramid down to the discard pile (foundation)—match cards based on their face value to move them.

As the Kings possess a value of thirteen, you can immediately move them to the foundation as a single card. The best score you can attain in the game is zero since the fundamental notion of the game is to move every game to the foundation. If there are any cards you cannot form into pairs, it results in a loss. This renders it vastly different from several other games where you try to score the highest number of points to win!

Setting up the Game

Start setting up Pyramid solitaire by shuffling your fifty-two card deck, and commence the pyramid by putting the first card face-up. To begin the second row, you place a couple more face-up cards marginally overlapping the top card. Repeat his pattern until you get to the bottom row with seven cards.

Once the pyramid’s construction is done, you resume with the remainder of the board. In certain games, you’ll do the second row of seven cards beneath (but not overlapping) the bottom row of the pyramid. This is known as the reserve, and these cards always remain available to be played. After dealing the tableau, place the remaining cards to the side face-up to create the stockpile, and you will use cards from this pile when the game is in progress.

Moving your top card to the discard pile from the stockpile makes sense. The cards in the discard pile are also positioned face-up – the opposite of their placement in the stock. One can play from either pile all through the game.

How to Play Pyramid Solitaire

Whenever the value of two exposed cards is 13, you can discard them. Due to this reason, this version of the game frequently gets the name Solitaire 13. However, discarding is your call and there will be occasions when it tactically makes sense not to discard.

If no overlapping cards are present, the cards present in the pyramid are exposed. Only a single card from the draw pile is revealed at any situation in the game – the latest draw pile card to be flipped is the only card exposed.

Here are some possible discard combinations:

Turn cards from the stockpile one at a time. If you cannot pair a card with another available card, it is moved to a waste pile, the topmost exposed card that always remains available for pairing. Any time a pair of available cards total 13, they can be moved to the discard pile. This also applies to single exposed kings. Available cards include any totally exposed cards and comprise any of the six reserve cards, the latest card turned from the stock, the topmost card on the waste pile, and any other wholly uncovered card in the pyramid.

Only the six cards in the pyramid’s bottom row are available at the beginning of the game. They make other cards lying higher up in the pyramid available as they get removed. For any pyramid card to become available, it should be totally exposed by removing the two cards that cover it. When the stock is exhausted and you cannot form more pairs of 13, the game ends.

How to Win Pyramid Solitaire

You win a game of Pyramid Solitaire when the draw pile is exhausted, or all the cards have been removed from the pyramid, whichever takes place first.

The game concludes when there are no more pairs that you can legally make or the pyramid undergoes destruction. You win when the pyramid is destroyed, but you lose if it ends without destruction.

How many rows in pyramid solitaire?

To get the pyramid going, one card is dealt face-up atop the playing area, subsequently two cards underneath and partly covering it, followed by another three beneath, and so on. This completes a row of seven cards for a dealt total of twenty-eight cards (or six rows of twenty-one cards).

What is a good score in pyramid solitaire?

Count the number of remaining cards that remain face-up in the pyramid to score. Strangely, pyramid solitaire features an ideal score of zero, where you have matched all cards into the foundation.

Nearly 80% of all Solitaire games are winnable, on average. Pyramid – one of the most straightforward Solitaire games – offers the lowest probability of winning, with the odds moving between 0.5 to 5.5%. It is indeed a challenge when you’re playing pyramid solitaire.

With the help of this article, you’ll be pretty well-versed in the game of Pyramid solitaire. Do not waste any more time – play the actual game to understand better. If you’re keen on trying other solitaire variants, download the MPL Pro app and try Spider Solitaire and Cube Solitaire. These games are super exciting and offer fantastic rewards!