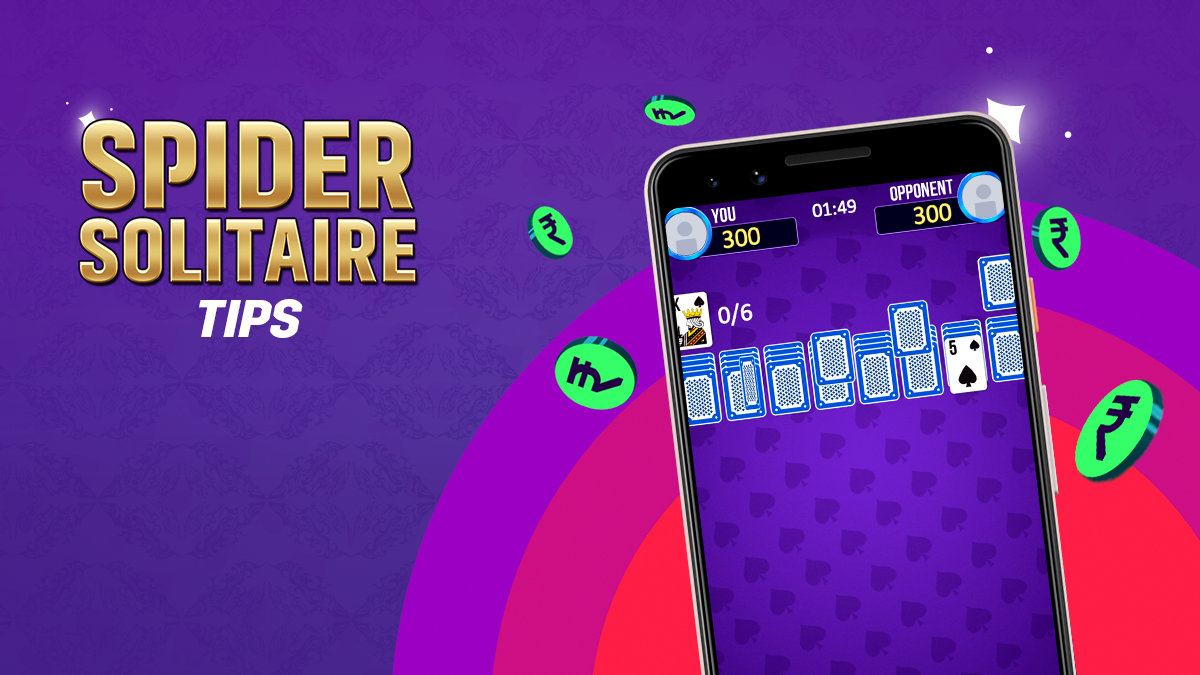 As far as two-deck Solitaire games go, Spider Solitaire is one of the world’s most sought-after card games. Back in 2005, it even surpassed the popularity of Klondike Solitaire. Many card game enthusiasts are fascinated by Spider Solitaire as it appears more sophisticated and challenging. If you wish to increase your chances of winning this card game more often, the following tips and strategies might come in handy.

The best way to get a fresh set of possible moves is to uncover hidden cards. It is also an effective way to create an empty pile. Use the only clear column to flip the final hidden card from beneath a king when no better moves are available.

Move cards from those columns that have fewer cards. You can fleetingly use empty piles to place cards while rearranging sequences into a fully packed build—transfer cards to empty spaces to turn more cards over.

Inspect all forward-facing cards and sequences – mixed or single-suit – that you have. Rearrange any mixed sequences and convert them into one-suit piles. Also, see which cards you are missing to complete any sequence and focus on finding them in the next moves.

Use The Undo Button

While playing Spider Solitaire, you have to develop strategies on the go. For instance, if you are playing MPL’s Spider Solitaire online, you need not worry as the undo button exists. It will aid you in getting back to the most recent action and execute the correct move you missed.

The undo function is also helpful in determining how different movements affect the game’s structure. Imagine that you have two cards of the same suit and number you are looking to move into a sequence. The undo button allows you to try moving both to see which supplementary moves each one enables. Pick the one that offers the best chance of success in the game.

There is a reason hints are available at all points within the game. As MPL games come with a timer, the purpose of the Hint button is to help players not waste too much time when they cannot think of any viable moves. The Hint button is also something to use along with the Undo button when you cannot progress.

Do Not Squander a Move

Moves often decide the fate of Spider Solitaire games. For instance, you could chance upon a game state to induce a card to turn in a column.

While it is possible to get there in just two moves, you find out that by moving the order of cards – using four moves instead of two – you can both flip that hidden card and turn the hidden card in another column. Before you make moves, you should consider what the gain or loss from it could be.

Drop a Column Early if Possible

Empty columns are strategically crucial in Spider Solitaire games. The cards from a packed column from King to Ace shall be excluded from play. An empty column will assume the position of the previously removed one.

You have to build temporary storage space for cards you can use to rearrange the sequences. This helps form natural card builds and win the game quicker.

A vacant column is vital for players to enable almost every strategy mentioned here. Use an empty column to store cards as you transfer them between columns momentarily.

Move cards from those tableau columns that have lesser cards. While rearranging card sequences into natural builds, use empty piles as interim storage—transfer cards to empty spaces to turn them over. To be doubly sure, observe the game state and make a move only when the game requires you to.

Flip as Many Cards as Possible

If you want to see how many winning chances you have, try flipping as many cards as possible. Consequently, this helps in two ways: discover hidden cards and explore a wide range of moves that you can make. Also, try to create a card sequence by following suit if possible.

As per Spider Solitaire rules, you cannot place a King over any other card. In specific instances early on, however, you might want to move another card to an empty column in the hopes of placing it elsewhere after the deal. Doing so permits more space in the column for re-stacking.

Learn To Extract a King

Most Spider Solitaire players believe that a King should never be placed in the only empty column – instead, it must be extracted only when more than one column is empty. While this is touted as a worthwhile strategy, it is not practical all the time.

When Kings cram so many columns, a loss is looming around the corner when nothing can be immediately taken down. In such scenarios, the wise decision is to extract the King into the only clear column. Many view this strategy as a double-edged sword, though it can sometimes be worth the risk.

You cannot always win every Spider Solitaire game; that’s practically impossible. But, if you spend sufficient time to conjure up a strategy carefully, you stand better chances of winning.