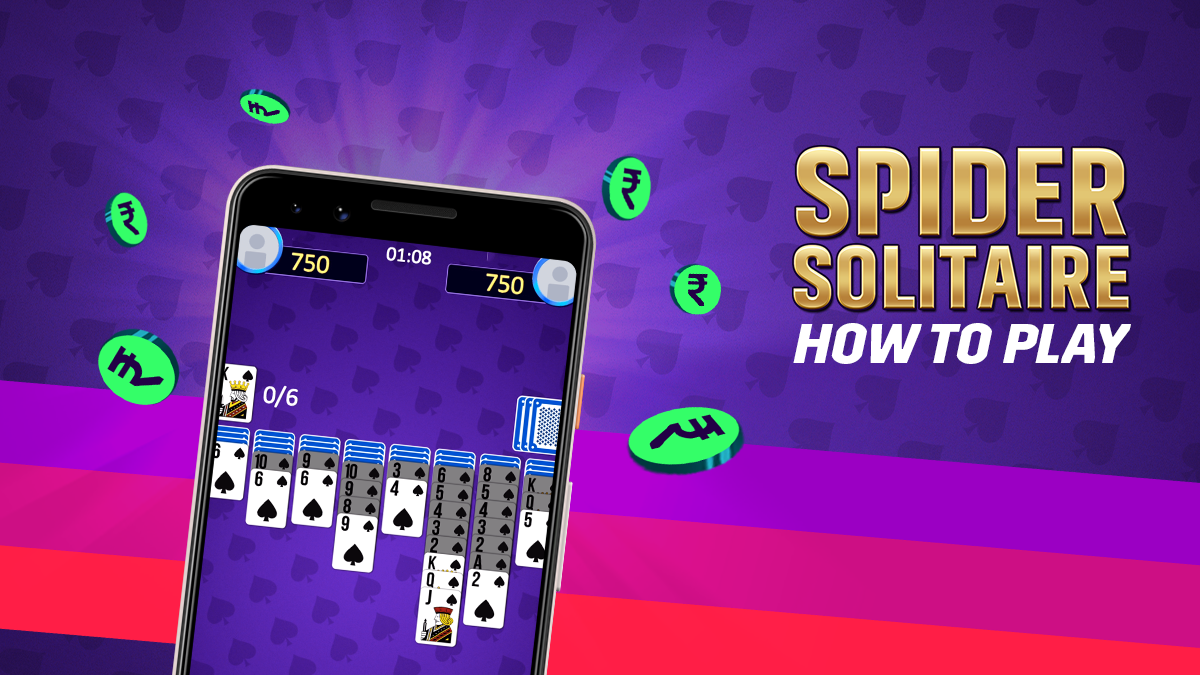 Spider Solitaire is one of the most entertaining card games amongst Solitaire enthusiasts. The unique feature of this Solitaire game is that you can alter the difficulty level by using different numbers of decks. In today’s smartphone era, the virtual version of the game is always available at your fingertips.

At the start, the card layout is such that each player is dealt four rows of ten face-down cards to form the tableau columns. Deal four more cards face down to the four columns lying furthest to the left, followed by dealing a face-up card to the end of each column. The cards that remain are placed face down, forming the stockpile.

– You are allowed to move the topmost card of a pile along with every face-up card below it that follows in ascending suit and sequence.

– You can leave some cards behind and break a sequence of available cards at any point in the game. For instance, if a pile from top-down displays 4, 5, 6, 7, you can move either the first one, two, or three cards as a unit, but you cannot move the (7) seven before the preceding three cards are removed. The next card underneath is turned face up and becomes available when all face-up cards on a pile are removed.

– You can only move Kings into empty spaces. Alternatively, one can fill the spaces with any movable unit.

– The player deals a new row of ten cards face up when no productive moves are possible at his end. Before such a deal is made, you have to ensure that all empty spaces are filled. The final deal comprises just four cards that are placed on the first four piles.

How To Play Spider Solitaire on MPL

The original version of Solitaire uses a minimum of two decks of playing cards – 52 in number – and there may be two or four suits involved. Spider Solitaire on MPL is a bit different and possibly a lot easier owing to its short, racy game sessions. Only a single of playing cards is used, that too, with just one of the suits (Spades, i.e.). Here’s what all you should know:

We can segregate the layout of MPL’s Spider Solitaire game into the following sections:

The tableau is where each player arranges and showcases the cards. It generally consists of ten piles, but in MPL’s real money gaming version, there will be only four piles of five face-up cards. Add a face-down card to a single column of cards; after that, five cards are dealt face-up.

As the name suggests, the discard pile includes those cards discarded or removed by the player. The player cannot interact with this pile on the board.

The stockpile consists of the remaining 25 cards placed in a group of five. Players are dealt the furthermost group of cards face-up in all the piles on the tableau while interacting with it.

– Use the Hint button if you think you are stuck at any point.

– You can use the Undo button to reverse the most recent move.

– Dab the stockpile to receive five more cards when you run out of moves.

How Do You Win Spider Solitaire?

The player’s goal in Spider Solitaire is to build cards from K to A in a descending suit sequence within the tableau columns. When you form such a sequence, it gets automatically moved to one of the eight foundation piles. You win the game when all 104 cards have been played to the foundations as eight individual K to A stacks.

However, in the fast-paced MPL variant, there are some small add-ons to how you can win the game. A timer is applied to these challenging Solitaire games, adding an element of pace to the proceedings. If neither player manages to complete the sequences within that time, the player with higher points wins. You should understand the scoring system within the game to secure a better score than the opponent. Each move has consequences and could result in increasing or reducing your score.

Do you think you’re ready to play? Just download the solitaire game right away and decide for yourself!