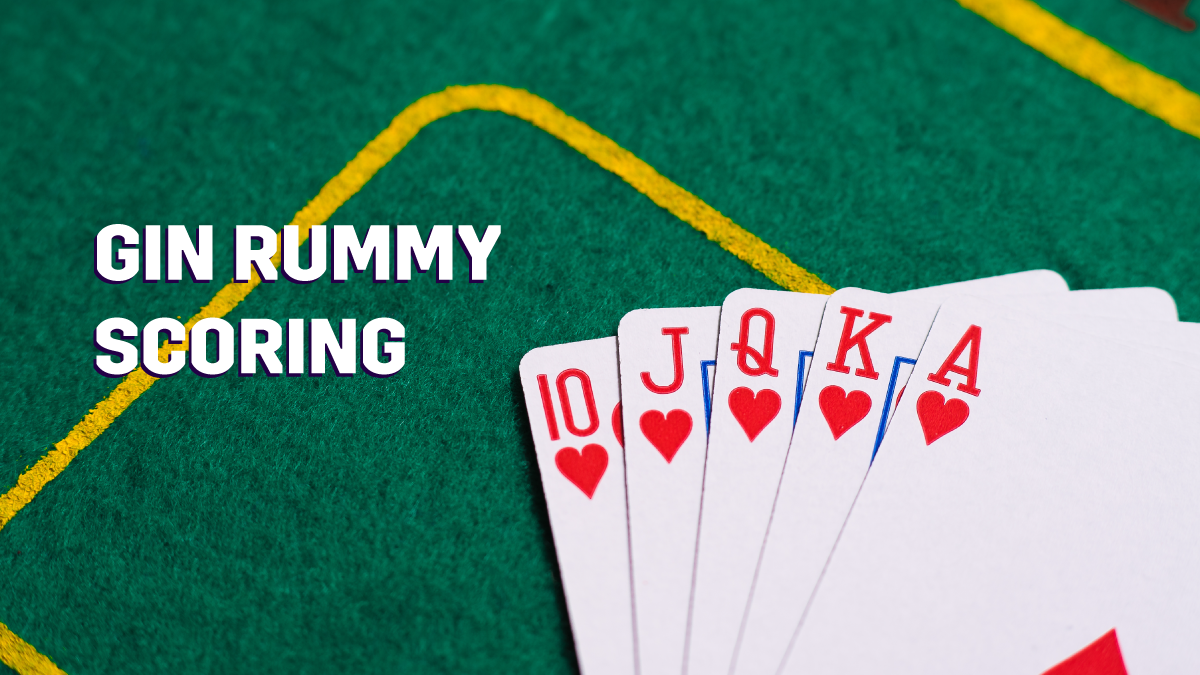 Gin Rummy is one of those fun card games that almost every card game enthusiast has a thing for. A classic card game that has existed for a long time, Gin Rummy is played by matching cards in sets and runs of three or four cards and gathering points from all your unmatched cards. When a player knocks or attempts to score points in a round by summing up their mismatched cards, you can tally up the points distribution and note them on a sheet of paper to keep track of scores.

In this Gin Rummy card game blog, you’ll learn more about Gin Rummy rules and concepts like Knocking, Big Gin, and Undercuts in detail. Getting the hang of these will help you win more gin rummy games and become a pro.

After picking a card, you can end the play if you can form valid combinations (i.e., sets and runs) with the cards in your hand. You can do this by discarding a single facedown card onto the discard pile and revealing your entire hand, assembling it as much as possible into runs (sequences) and sets (groups of equal cards). Any remaining cards in your hand that does not form part of a valid combination are deemed unmatched or deadwood. The total value of deadwood should be ten points or less. Ending play in this fashion is called knocking, supposedly since it’s done by a player knocking on the table, although it is common to discard face down instead simply.

Knocking when you have zero unmatched cards is called going gin, offering a special bonus. Though most hands that go gin comprise three combinations of four, three, and three cards, it is also acceptable to go gin with two five-card sequences.

A player who fails to meet the requirement of less than ten deadwood can knock at any turn, including the first. A player is nowhere forced to knock even if able to but can decide instead to resume playing or attempt to secure a better score.

The opponent of the knocking player needs to spread their cards facing up, assembling them into runs and sets wherever possible. Given the knocker didn’t go gin, the opponent can also lay off any unmatched cards by making use of them to extend runs and sets laid out by the knocker, i.e., by adding a fourth card of the same rank to a cluster of three, or other following cards of the same suit to either end of a sequence.

When a player goes gin, the opponent isn’t permitted to lay off any cards. The knocker also cannot lay off cards on an opponent’s runs or sets.

Also, the game ends if the stock pile gets reduced to two cards, and the player who picked the third-last card discards and didn’t knock. In such a scenario, the hand is canceled, no score is noted, and the same dealer resumes dealing. Some play it after the player who picked the third-last stock card discards; one of the opponents can pick this discard with the objective of going gin or knocking after a different card has been discarded, though if the opponent does neither, the hand is canceled.

Aces are scored at a single point, face cards at ten, and every other card is scored at their respective numerical values. The number of bonus points awarded varies from region to region. No matter what the bonuses are, points are scored in Gin Rummy for the below:

Once a player knocks and layoffs are made, the knocking player gets a score equal to the difference between both hands. For instance, if a player knocks with an 8, and the opponent has 10 deadwood points after laying off, the knocker receives 2 points for the hand. It is considered a misdeal if a player can knock before any cards are accepted. If a player is able to knock before any cards are accepted, it is deemed a misdeal.

After they go gin, a player gets a bonus of twenty-five points alongside the total deadwood count in the opponent’s hand. There is no opportunity to lay off whenever a player goes gin.

It happens when the defending player possesses a deadwood value lower than or equal to the knocker’s (this can happen naturally or by laying off post-knock). In this scenario, the defender scores an undercut bonus of twenty-five points along with the difference in deadwood value in the knocker’s hand. In some rule sets, the bonus is only ten or twenty points or not awarded in the situation of a tie.

It gets added when the game concludes. For each hand a player wins during the game, twenty-five points get added to their score.

If a game is finished with the winner having won each and every hand, the points for each are doubled prior to adding the line bonus.

In certain variations, when a match concludes with one player in the lead by fifty points, that player loses by default.

You win a round (or hand) in Gin Rummy by “knocking”. A player can knock when all cards in their hand form melds, and no cards remain unmatched. At that juncture, you achieve “gin”. On your turn, draw a single card from the stockpile, and put it face-down on the discard pile. This lets the opponent know they’re knocking. Players can also physically knock the table to indicate that they’re reached gin.

You can also knock to hold your opponent off from getting gin. Players cannot end a hand if their unmatched cards (deadwood) are valued at ten points or more. For instance, if you possess a run of 7-8-9-10 of Clubs, a set of J-J-J and a 5 and 7, you cannot knock before the deadwood is more than ten.

Both players need to lay their cards face-up on the table when one of the players knocks. During this point, the non-knocker can lay off deadwood cards onto their opponent’s melds. For example, if the non-knocking player has a three and a four deadwood card, they can add it to the opponent’s run of 4-5-6 or 5-6-7.

You can only lay off cards when no player reaches gin. Here’s a summation of how the scoring system works. The melds alone do not carry any points. One player deducts their deadwood points from the other. For instance, if you possess a 4 and a 5, and your opponent possesses a 10 and a Jack, you deduct 9 from 20 and get 11 points.

If a player gets gin, they automatically get a gin bonus of twenty-five points. There is no deduction involved. The game carries on until the winner gets to the previously agreed-upon score over several rounds. In most games, it is whoever gets to hundred points first.

Play Gin Rummy on MPL for an opportunity to win exciting cash prizes. You can play 1-on-1 battles or participate in on-going tournaments for a bigger prize. The game is fast-paced, exciting, and fun to play. Try it out today by downloading the MPL Pro app and you’ll no longer have idle hours in your life!