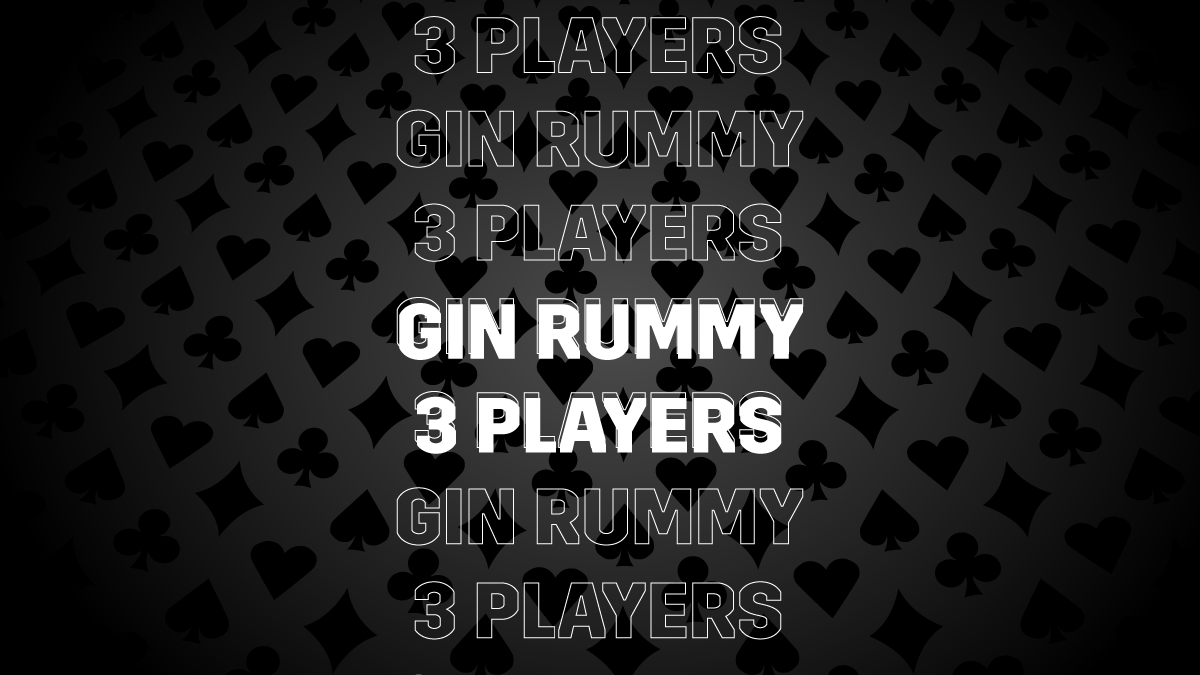 Rummy Games are always exciting, aren’t they? Similar to Hollywood Gin and Oklahoma Gin, a variation of the Gin Rummy card game is suitable for three players. The objective of this game is to arrange sets (3 or 4 of a kind, or three or more consecutive same-suit cards) to collect points.

The game pans out over multiple rounds. Use a standard deck of fifty-two cards to play. In the game, King is the high card, and Ace is the low card always. Face cards carry 10 points each. The number cards are worth the respective numerical value, and an Ace carries one point.

Let’s learn more about the three-player version of Gin Rummy before you sit down to play rummy (and other card games) with your pals.

Each player randomly picks a card to ascertain their role for the initial hand.

The player who draws the highest card is “in the box” and faces the other two, who can work together.

The player who draws the middle card is the captain of the two-player team. He can procure advice from the third player (who sits out), but the captain makes the final call on every decision.

The player in the box deals every hand.

Shuffle the deck well and deal ten cards to each player. Players have to look at and sort out their cards.

The next card is placed face up in the center of the table to commence the discard pile. The remaining cards are kept face down adjacent to the discard pile to create a draw/stock pile.

Secondly, you should discard a face-up card onto the discard pile.

In each round’s first turn, the non-dealer can choose whether or not to pick the first face-up card. If the player declines, the dealer can pick the card. If one of the players picks it, that player ends their turn by discarding it, and then the other player commences their turn. If both players decline to pick, the non-dealer begins the game by choosing the top card from the draw pile.

The round concludes when a player knocks. This can be done on any turn (also, the first) after picking but before discarding. A player can knock when they have the ability to create sets, discard a single card, and have ten points or less remaining in their hand.

The same card cannot be part of two sets.

Once the player knocks and discards, the knocker organizes and reveals all their cards on the table facing up.

The non-knocking player also does the same. If the knocker didn’t go gin, the opponent could lay off any unmatched cards by adding to the knocker’s sets. For instance, adding a fourth card to a cluster of three of a kind or adding more consecutive same-suit cards to a sequence).

You’re never mandated to knock. You can resume playing with the idea of developing a better hand.

Every player calculates the value of the deadwood (or unmatched cards). If the knocker’s count is less, they score the difference between both values.

If the knocker doesn’t go gin, and the values are the same – or the knocker’s value is higher than the opponent’s, the knocker is undercut. The opponent scores 10 points, and the difference between the counts.

The player who sits out does not score any points under these circumstances.

The round ends in a draw when only two cards remain in the stock pile once a player discards and neither player knocks. The same player must deal again.

Players sit for additional rounds until one of their cumulative scores reaches 100 points or higher. That player wins the game.

Gin Rummy is traditionally a game for two players, but there are several ways to adapt it for three-handed play:

The version we described above is what Chouette follows. While the game is designed for three players, only two players are active in a game at a time.

Pronounced “shoo-ETT,” it is a blanket term often used in Backgammon to expound a method for more than two players getting involved in a two-person game. The technique also gets the name “Captains.”

All participants pick a card from the deck in order to ascertain the two playing players in Chouette. The player holding the highest card enters the box while the other two forge a partnership. The others come next in line based on the order of their picked cards.

As mentioned above, the player in the box goes solo against the captain, with the other remaining player advising the captain on moves but the final decisions are made by the captain alone. If a captain wins a hand, they retain their position. When they lose a hand, the captain’s position moves to the next player in line. The man in the box plays the entire game, despite winning or losing individual deals.

Cutthroat is another version of Gin Rummy that’s apt for three players, but only two active players are part of the game at a time. It is also called Round Robin Gin Rummy.

All three players must pick a card from the deck to decide the first two participants. The player who draws the lowest value card sits out the first deal. The player holding the second-lowest card becomes the dealer and plays against the one holding the highest value card. After the first hand, the loser sits out, and the inactive player deals to the winning player. The inactive player can only observe and not offer advice to either player.

Every player plays for themselves, with a cumulative total score set aside for each. The first player to reach 100 points wins the game. After adding game and box bonuses (100 bonus points for the overall game and 25 points for each winning hand), every player pays the score difference to their opponents. If a player gets shut out, he plays an extra 100 points to the winner.

This version of Gin Rummy is ideal for three active players playing simultaneously.

In Battle Royal, every player is dealt ten cards. Each player, in turn, starting with the player to the dealer’s left, has the chance to pick the first upcard. After that, each player, in turn, may take either of their opponent’s discards unless one has already been picked.

When a player knocks, the opponents can lay off on the knocker’s original sets and not on subsequent cards. For instance, if the knocker’s set was 4, 5, 6 of Spades, and the next player laid off a 7 of Spades, the other player cannot add an 8 of Spades.

Scores are kept individually for each player. The winner of every hand scores the difference between his count and the total of his opponent’s counts. There isn’t any undercut bonus. If the knocker gets undercut, 20 points are subtracted from their score. The going gin bonus is 40 points. A hand ends in a tie if no one knocks and only three cards are left in the stock.

The game is played for up to 200 points, and bonus points get added as in two-handed Gin Rummy. Each player settles scores separately.

To play a more straightforward, fast-paced version of Gin Rummy, you must download the MPL Pro app. You also stand a chance of winning cash prizes. Give it a try today and see how good a player you are!