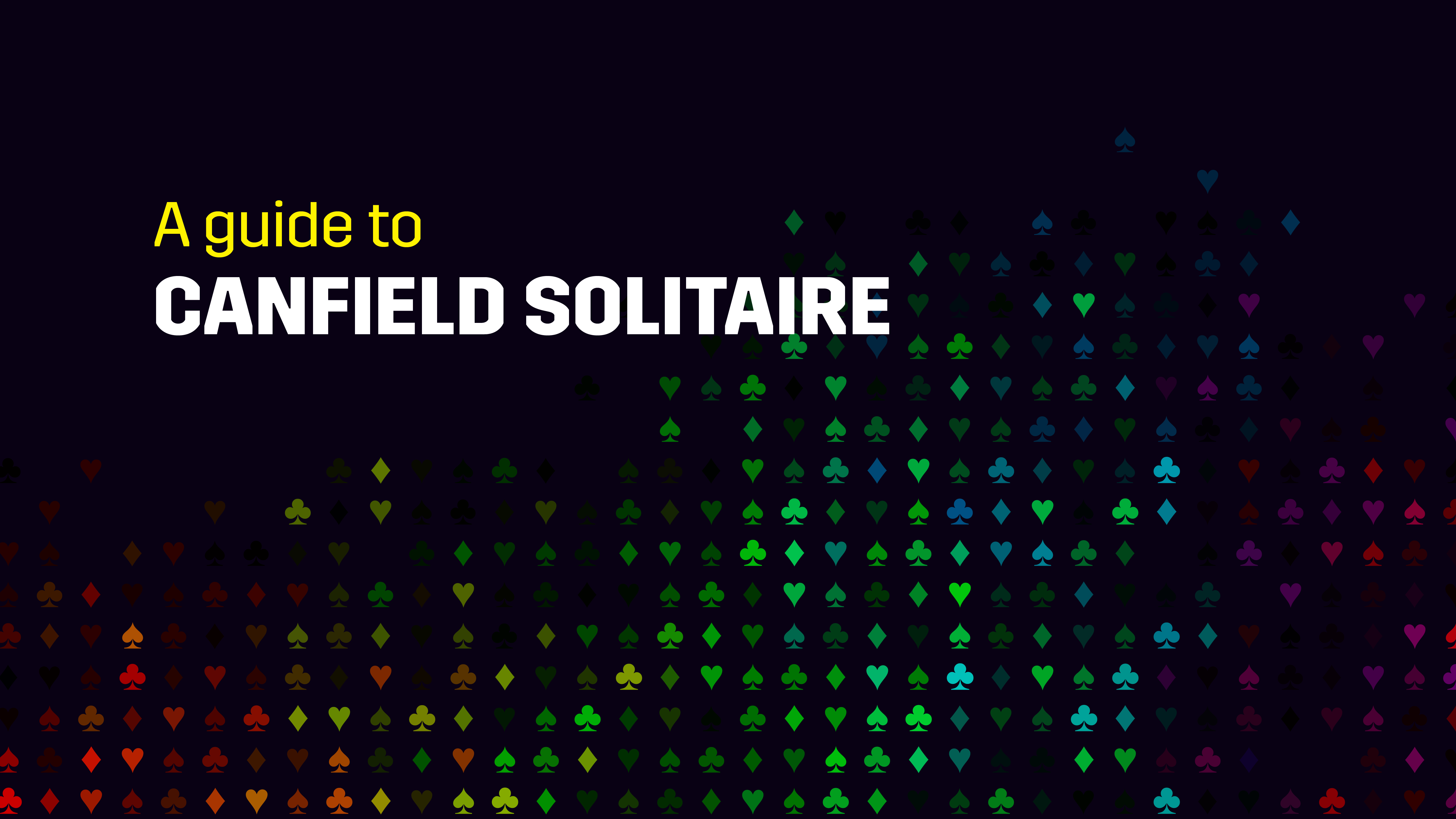 Canfield is among the patience or solitaire card games having a very low probability of winning. It was initially an English game called Demon Patience and referred to as the perfect game for one pack that’s yet to be invented. Even then, it found takers in the United States in the early twentieth century when casino owner Richard Canfield (whom the game is named after) decided to turn it into a casino game.

The game was known as Canfield in the US, while it stuck to the name Demon Patience (or Demon Solitaire) in the UK and the rest of the world. The game is closely associated with Klondike and is one of the most played games of its kind. The variants of Canfield solitaire games include Chameleon, Rainbow, Selective Canfield, Storehouse, Superior Canfield, Eagle Wing, and Variegated Demon.

In this article, we’ll take you through various aspects of Canfield Solitaire, such as setup, rules, gameplay, strategies, and more.

You can start by shuffling the cards before building out the playing areas. There is no requirement to set up if you play on a PC or a smartphone, as the software automatically does it for you.

After you shuffle the cards, take thirteen cards from the top and put them in the upper left corner. This one pile acts as your reserve pile. It must be positioned face-up, exposing only the top card. The rest should remain hidden.

Pick a card and use it as the first foundation pile. Place it face-up. This card determines the other three foundation piles. Therefore, the other piles you begin foundations with during gameplay progression must be of different suits but the same rank. These become available as you keep playing.

Underneath the foundation is where you’ll set up the tableau, which should ideally comprise four cards, all faced up. The remaining cards you’re left with must be placed face down on the table. This constitutes your draw pile. If you follow the above instructions, your game will be set up and ready to go!

Fill up the foundation piles by using the top card of the tableau or reserve piles. You can move cards between the tableau piles or from a reserve pile to a tableau pile in a descending sequence of alternating colors. Move either a single card or a group of cards. When there is an empty pile in the tableau, it gets filled almost immediately with a card from the reserve pile.

Start turning cards over from the stockpile when all your initial moves are done. You can turn over three stock cards at a time. Using the rule above, transfer cards from the stockpile to the tableaus or foundations. The stockpile, usually in the upper left corner, can be flipped over as often as you like.

Unlike standard Solitaire, Canfield has stringent guidelines that make the game more fascinating and challenging. Technically, only about three percent of Canfield games are winnable, with the rest often coming to a standstill.

While playing cards onto the tableau, remember that they should be placed in descending order and alternating colors. For instance, if you want to play a card black 3, it must be a red 3.

During gameplay, the top reserve card is available at all times to be played onto a foundation, usually in the upper right corner. The same goes for the tableau’s top card. To use the draw pile, the three cards on the top are drawn and placed in the waste pile – the top card is always available to be played on the tableau or the foundation.

To play cards that lie deeper within the discard pile, every card above it has to be played. If the draw pile runs out of cards, the discard pile is turned facedown, unshuffled, and you may continue turning cards from it.

If you plan to move a tableau to another empty pile or onto another card in the tableau, you have to move the entire stack. When space becomes available in the tableau, it is instantly filled with the top reserve card. If the reserve also happens to empty, the discard pile’s top card may be played onto it, but you can decide when this needs to be done.

When both the reserve pile and tableau pile are empty, you can put any card that can typically be moved to the empty pile.

Add available cards in ascending order to the foundations. If instance, if the foundations are 7s, you must add cards in this order: 8, 9, 10, J, Q, K, A, 2, 3, 4, 5, and 6. Cards added to a foundation should be of the same suit as all preceding cards on that foundation.

Add cards onto the tableau in alternating colors in descending order. For instance, if a tableau card is the 8 of clubs, the subsequent card can either be the 7 of hearts or the 7 of diamonds.

How Does Canfield Solitaire End?

Essentially, there are two ways a game of Canfield can conclude. Simply put, you can either win or lose the game. To win the game, you must move all the fifty cards to the foundation piles in ascending order following the suit. When there are no playable moves left, then you lose the game.

Here’s an interesting fact about Canfield solitaire. Roughly, the winning percentage of Canfield solitaire stands at 3%. Quite a few games eventually come to a standstill. If you think you’ve got what it takes to win, then this is one of the games you can play to showcase your skills to everyone.

Since the reserve cards are hidden, and the three-at-a-time dealing of stock cards implies that cards played early on can significantly influence which ones become available much later, it is a pretty challenging game to win even by usual playing standards.

Tips on How to Win Canfield Solitaire

Ensure that you deal most stock cards to make the right winning moves in the game. Attempt to create empty spaces as much as possible at the start of the game. Spread the building of foundation piles evenly. For instance, if you play a black 6 before you can locate red 7s, you will face the problem of finding these cards as the game progresses. Also, do not allow foundations to run further ahead of others. This adds to the possibility of getting stuck in the game’s later stages.

Above all, this is a fantastic version of solitaire that helps you kill time and prominently improves your problem-solving skills. The relatively low winning rates shouldn’t turn you away from this game; instead, it should be an enjoyable, competitive challenge. If you can successfully move all cards to the foundation piles, then there’s no doubt that you’re a solitaire master.

Helpful Read: All About Pyramid Solitaire

You can play Canfield Solitaire directly on a web browser or download a gaming app. If you’re interested in trying a totally different variant of the solitaire game, play Spider Solitaire (1-suit) or Cube Solitaire on the MPL Pro app. Both games offer thrilling, fast-paced 1v1 battles and tournaments with fantastic prizes for winners!