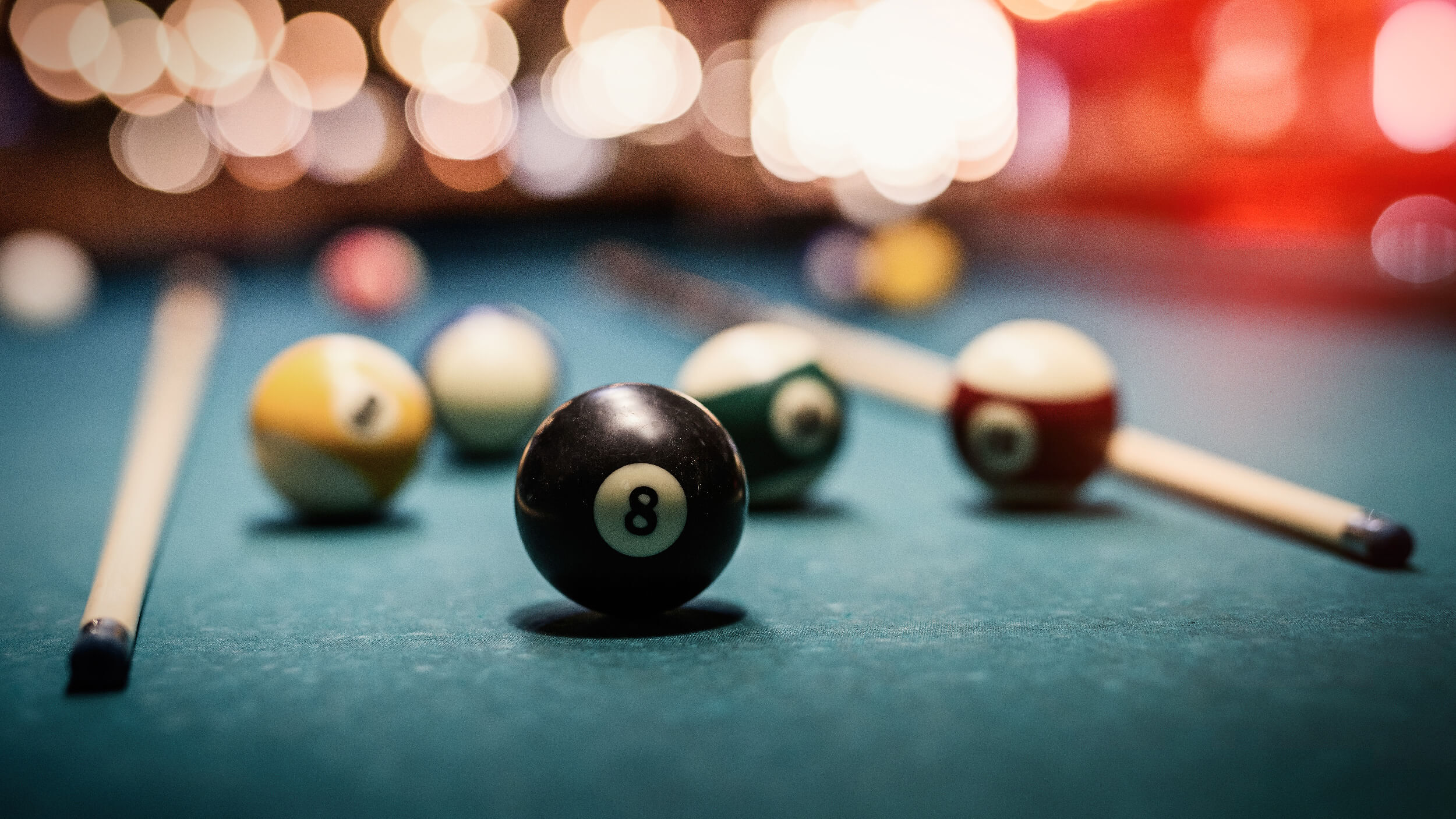 8 ball pool is an interestingly fun game that you can play on a billiard table with cue sticks, six pockets, and sixteen balls. This includes a single white “cue ball” and fifteen object balls – including a black “8-ball.” In the standard 1v1 version, one player attempts to pocket the solid balls (numbered 1-7) while the other tries to sink the striped balls (numbered 9-15). Neither player can sink the 8-ball until they have pocketed all of their respective balls (solids or stripes). The first one to sink the 8-ball is the winner of the game.

8 ball pool is undoubtedly the most common pool discipline (as a game) and is often used synonymously with “pool” itself. Several variations of the game continue to pop up, some of which are regional. For the uninitiated, 8 ball pool is the second most-played pool game at a professional level after nine-ball, and for many decades, far ahead of straight pool. 8 ball pool has also made its way into our smartphones and handheld devices, getting everyone who cannot make it to the parlor due to current circumstances very excited daily. One such engaging variant is MPL’s 8 Ball Blast which you must indeed check out!

The player tries to sink the 8-ball only once they pocket all of their other object balls. For a player to win, they should first designate the pocket that the 8-ball is expected to be pocketed into, followed by doing the same, i.e., sinking the 8-ball into said pocket successfully. In the physical version of the game, the player loses if they push the 8 ball off the table. They can also lose if they commit a foul or pocket the 8-ball into a non-designated pocket. In other cases, the player’s turn is over, even when a foul happens.

In other words, a game of eight-ball that follows world-standardized rules, similar to a game of nine-ball, isn’t over until the “black ball” or the “money ball” is no longer present on the table. Numerous amateur leagues adopt this rule for ease of play. In 8 Ball Blast – the MPL version – the goal is to pot the balls, including the 8-ball in any order.

In an actual game of 8 ball pool, you have to pick the triangular pool rack and place the balls (numbered 1-15) inside. Assemble the rack at the opposite end of the pool table from the head spot, with one corner facing the break. Ensure that the foot string flanks the rack. When the game is ready to begin, remove the racking frame with just the balls remaining.

Place the 8-ball at the center of the triangle. Position the 1-ball at that point of the triangle which faces the break. Add a stripe ball in one of the back ends of the rack and a solid ball in the other end.

To fully grasp the exciting game of 8 ball pool, you need to get familiar with its terms. For beginners, here are some:

As far as the traditional 8-ball gameplay is concerned, if you shoot “solids,” then you should make all balls numbered 1-7 so that you get a chance to pocket the 8-ball. If you hit “stripes,” then make all of the balls numbered 9-15. Your turn ends in a scratch if you make your opponent’s ball.

Any game of 8-ball pool concludes when a player sinks the 8-ball legally after pocketing all the numbered balls in their respective group. Nonetheless, a player can also lose the game by committing certain fouls or infractions, which include the following situations:

Why MPLs 8 Ball Blast is easier

The rules of gameplay are simplified in MPL’s 8 Ball Blast. They are as follows:

Moreover, the pocket multiplier (2x-10x) rotates with each attempt. Three rotations take place when you pot the 8-ball. Since the games follow a timer, the players also receive a time bonus if they pot every ball before it runs out. Another exciting element of MPL’s 8 Ball Blast is its asynchronous play factor. You can immediately start your game instead of waiting for an opponent to match. The great touch controls also add to a smooth gaming experience. We also have an in-depth guide on playing the game and some valuable tips and tricks. What are you waiting for? Try the game now!