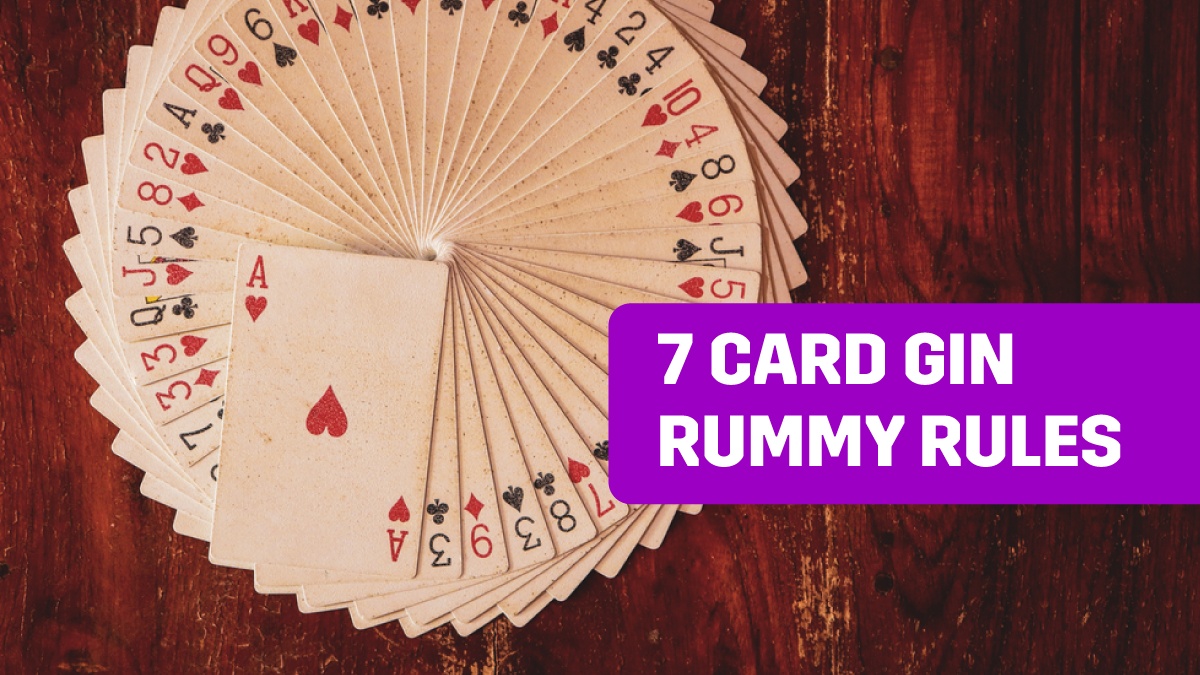 One can perceive 7 card rummy as Rummy 500’s close cousin. It is a game that even beginners can learn quickly and enjoy playing. Young adults especially love the game as it is a faster, straightforward, and more effective way to showcase your card matching skills to an opponent without having to keep score.

Since it is easy to teach 7 card rummy games to a beginner, you can learn fast and move on to more complicated variants afterward. If you’re solely interested in killing some time while traveling or indulging in a pastime, this is a fantastic card game for anyone who loves to play rummy. New players can join at any time without having to be card game experts from the start.

For starters, Rummy covers a blanket cluster of card games (e.g., Standard, 500, Gin, 7-Card, etc.) where players have to group cards of the same rank and/or create sequences in the same suit. Learn more about 7 card gin rummy rules in this article.

How to Play 7 Card Rummy

The dealer deals in a clockwise manner, one card facing down to each player. The process repeats until each player has seven cards. Place the subsequent card face-up at the center of the table, which will be the “Discard pile.” Place the rest of the remaining cards adjacent to it, creating the “Stock pile.” Each player can pick up and assemble the cards accordingly. The player who sits to the left of the dealer commences play.

The Object of the Game

Each player picks up seven cards from the table. The player seated left of the dealer starts the game. They must take one card from either pile – be it the stock or the discard pile. We recommend picking the face-up card only if you feel you can use it to form a combination with the other cards in your hand. If you do not require the card that faces up, go for the card from the face-down pile. After the player sees the chosen card, they must select a card from their hand to discard.

The card being discarded must be a card they need the least in their journey to victory. Once the player decides this, they should put the facing up atop the original or replace it in case it was picked up. Play resumes in the same fashion, clockwise. The other players can only pick a face-up card from the top of the pile. When another card is placed on top of it, it is considered to be out of play. It can only reenter the game if the face-down pile is concluded and needs re-shuffling and replacing.

Also, remember that if you pick up from the discard pile, you cannot immediately discard the same card!

As the objective states, you need to arrange all seven cards in your hand into two groups (or melds) – a group of three cards and another group of four cards. Each group can either be a Set or a Run.

The first player to assemble all seven cards can declare “Rummy” and ends up becoming the winner of that round (referred to as a “hand”).

The scoring aspect in 7 Card Rummy is intentionally kept really easy to understand.

Whenever a player declares ‘Rummy’ and wins a hand, they get 1 point. It is pretty common for the winner to first declare ‘Rummy’ and put their discard card face-down on the discard pile, hinting to the other players that they have won the game, followed by a display of their winning cards.

If the group wishes to resume playing, the person sitting on the dealer’s left must pick up the deck and shuffle. They become the new dealer, and the game continues in the same manner as before.

If every card in the stock pile has been picked, the next player takes the entire face-up discard pile and simply flips it over. This then becomes the fresh face-down stock pile.

It is essential to note that some players prefer shuffling the old discard pile before they turn it into the new stock pile to avoid a situation where players take advantage of memorizing the cards.

The winner, as mentioned above, is the first player to possess a winning combination in their hand. Once you pull up the card that wins, you should still discard one card from your hand and put it face down in the face-up pile of cards on the table to signify that you are done with the game. Then, show your cards to all the other players, and if it proves to be a winning combination, then you win the game!

If you wish to play a fun, online version of Gin Rummy, try it out on the MPL Pro App. Not only are the games entertaining, but you also get the opportunity to win cash prizes.