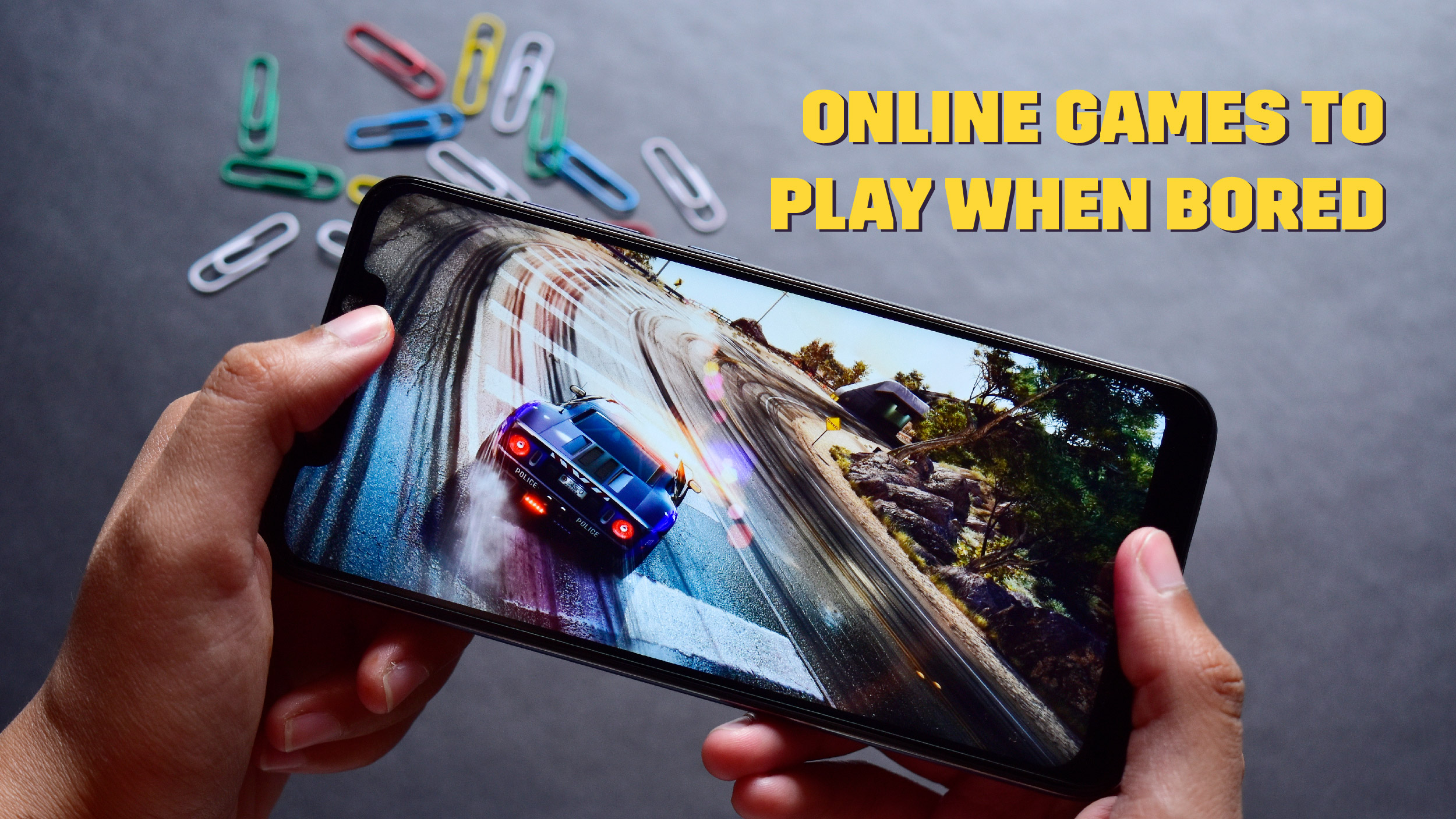 Well, the pandemic is like that one annoying cousin we can’t ever get rid of. Since it’s here to stay, there’s a good chance that shutdown orders and social distancing are still in place. The question of what to do when stuck at home has found varying answers throughout the last few years.

Whether you’re just bored or looking to kill time in between those unending work-from-home stretches or between online classes, playing an online game is one of the perfect forms of leisure and entertainment. These days, almost everyone is equipped to play online with smartphones and super-fast internet connectivity. The options are numerous, with an unending list of classic games in every possible category.

We’ve come up with a quick list of the best online games you can dig into when boredom gets the better of you:

A fun game in its original pen-and-paper form, several versions of online Sudoku are out there. Though the layout and gameplay mechanics might differ between different websites and platforms, the fundamental objective of this exciting puzzle game remains the same: to fill out a 9×9 grid with digits in such a way that each row, each column, and each subgrid comprises 1-9.

Being an excellent brain game, there’s a good chance you will soon see improvements in your brain capacity and concentration if you play Sudoku online daily. Sudoku also doesn’t require any specific math skills or calculative prowess, even when it’s a game of logic. While it can come across as pretty intimidating for beginners, it’s all about putting your brains to the test while also having fun. You’ll get better at the game with time, but the kick of solving Sudoku is something evergreen!

When has it ever not been riveting to play a good, old-fashioned Chess game? One of the classic board games, the online variants of Chess offer the perfect respite for those who are isolated and cannot involve physical players. Not only does the online version allow you to compete with hundreds of other skilled players worldwide, but it also is the perfect game to make friends and build bonds over.

Usually, online Chess is played in the form of a 1v1 battle. The layout replicates the traditional 64-square chessboard, and each player gets sixteen pieces. These comprise eight pawns, two rooks, two bishops, two knights, one queen, and one king. The game objective is to call checkmate on the opponent’s king, wherein no further escape moves are possible. While a slower board game than many others, chess is one of the most fun games when you get into the thick of it.

3. UNO! – One of the best games in the card category

One of the best online multiplayer games, UNO is extremely popular at social gatherings, parties, and events. Several websites offer free games of UNO, while Mattel’s version provides the most authentic gameplay. Compared to other card games that use a standard deck of fifty-two cards, UNO is much easier to learn and aesthetically appealing because of the presence of colors, numbers, and wild cards.

The best part is that a game of UNO can last as little as a few minutes or stretch to even half an hour or more, making it amongst the cool games worth playing online. The goal of each player is to become the first one to exhaust all their cards. While that may sound pretty easy, the game offers challenges in the form of skips, draw 4s and 2s, reverses, and color-change wild cards. UNO is one of the most addictive games on the list, making it universally acclaimed.

Presumably one of the easiest card games to play, 21 Puzzle is one of the many games you can play on MPL, the mobile gaming platform that integrates multiple games into a single, freely downloadable app. For 21 Puzzle, as the title suggests, the goal is to add up each respective column on the board to a total of twenty-one. Yes, it’s as simple as that. The game doesn’t require insane strategizing skills; instead, it focuses on point-based mathematical fun.

Play addicting games of 21 Puzzle with an opportunity to win cash if you’re able to score higher than your opponents in 1v1 battles. All you need to know is the respective point value of each card. The controls are straightforward, with a simple hold-and-drag mechanism to fill up the columns.

Spider Solitaire, which many of us played on our early Windows PCs, is now available to play online on the MPL app. Not only does the game get a fantastic visual upgrade, but it also simplifies the gameplay mechanisms. For instance, the original game can be played using even up to four decks of cards, whereas the MPL version settles for one. The game sessions follow a timer, and your objective is to form a set of 13 cards of the same suit in the order of Ace to King and move them to the foundation.

The game screen essentially includes three parts: the tableau – which is the player’s workspace; the stockpile – which is used to draw more cards when no moves are possible; and the foundation pile – where you move all created sets and sequences. You win by solving the game faster or scoring higher than your opponent.

Once played on PCs, a version of Solitaire Cube is now playable on the MPL Pro app. You’ll especially love this version if you’ve grown up playing Klondike. The gaming platform takes away all the sophistication associated with this card game, making it easier to play even for beginners. The player needs to arrange cards in the tableau and move them to the foundations in the order of Ace to King in alternating colors.

The game also comes with an “undo” button which helps reverse the latest move you make. This allows you to make wiser moves, adding to your winning chances. Also, each game only lasts five minutes, making the games equally thrilling and challenging.

That feeling of potting balls into pockets with a cue stick is incredible, right? Given that a pandemic is going on, not many billiards rooms and parlors are functioning at the moment. Add to that the long waiting periods involved. Avoid all of this and play a tweaked online version of 8-ball pool on the MPL app, known as 8 Ball Blast.

The game gleefully reminds you how fun playing 8 ball pool is, minus its complexities. Players need to pot all the balls, including the 8-ball, in any order within the allotted time limit or beat the opponent’s score to win the game. You can also play cash battles or tournaments where you win by topping the leaderboard.

Pirates & Treasures is a hidden object game where you will unravel all sorts of treasures while navigating a shipwreck. Each session lasts about ten minutes, where you keep progressing through the levels for more fascinating discoveries.

A simple click lets you find an item, and you can hold it to zoom into the object. If you are unable to make progress at any point, you can always use the hint button at the cost of a few points. Find all items displayed on the bottom panel before the timer runs out to level up!

If your nearby bingo hall is closed due to the ongoing pandemic and you’re in dire need of some Bingo fix, MPL’s Bingo Clash might be your best bet. This version packs America’s favorite version of 75-ball Bingo into exhilarating, time-bound sessions.

Mark off all the called-out numbers, use power-ups and try to get as many “BINGO!”s as possible. Bingo is undoubtedly a game of pace – the faster you dab the numbers called out, the higher the points you get. The boosters help you gain extra points, so use them wisely and whenever available.

10. Block Puzzle – The simplest game ever

Imagine Tetris, but with some contemporary upgrades and tweaked gameplay rules – that’s how you can sum up Block Puzzle in a single line. When the game begins, you will receive three different shapes to place on the board at a time. Once you exhaust the current batch of three, the next batch follows.

Each game lasts two minutes, and it is up to you to clear as many cells on the board as possible before the board fills up or the timer runs out. When you clear an entire line of blocks, you get a base score plus a bonus score. If you secure a higher score than your opponent, you win.

The world of online games is so extensive a list of ten may seem too little. But it’s a good start nonetheless. From word games to card games to casual games and more, you’ll always be spoilt for choice. Download the MPL app to play some of the games mentioned above with the possibility of winning cash.