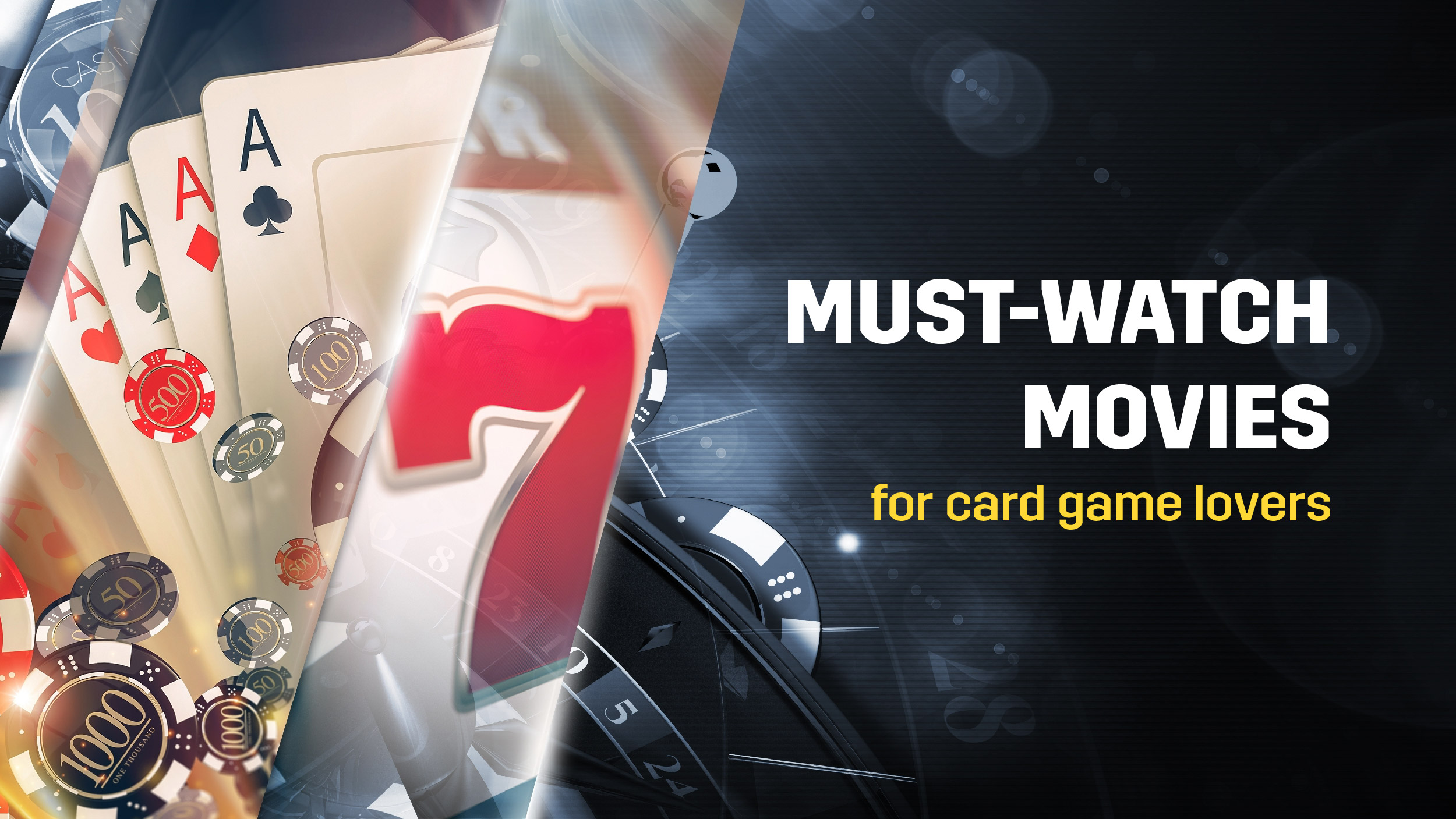 Card games have been a significant part of pop culture for a very long time, simply going by the number of movies with a card-game-centric plot. In some cases, the movie’s entire plot revolves around a high-stakes event involving card games, whereas, in others, the plot incorporates them into pivotal scenes. Almost all these films discuss concepts such as hope, risk, and rewards – the protagonist usually goes against all odds to win big in the climactic showdown, often with twists that explain how they get the job done.

Since many such films as categorized as thrillers, it is often up to the viewers to differentiate between a good movie and a better movie. Nonetheless, we cannot ignore how engaging they are, often as much as playing card games online, banking on our own cleverness. Adding to that, many great movies based on card games have also struck gold at the worldwide box office. Who knows, maybe you’ll end up learning an extra trick or two, which you could use in a solitaire or poker game.

Let’s take a closer look at some of the best movies based on card games that linger in our memory:

Movies Based on Card Games

Of course, we had to start the list with a Bond movie. Catch Daniel Craig (Agent 007) battle it out in a poker game tournament with Mads Mikkelsen (Le Chiffre) in one of the film’s most pivotal stretches. This particular portion of the film is equally intelligent and thrilling, with Bond trying to stop the terrorist-financier in an unduly high-stakes poker showdown, frequently punctuated by Chiffre’s attempts to subdue him.

If you particularly love Craig’s version of Bond, this is one of his best outings. The movie also features thrilling action set-pieces, stunning visual effects, and unpredictable twists. Nonetheless, we can all agree that Casino Royale’s best parts involve the game of poker.

The American drama flick revolves around Eric “The Kid” Stoner, played by Steve McQueen, who aspires to become the smartest poker player in the world. Once again, the game of poker takes center-stage, with Stoner eventually challenging Lancey “The Man” Howard, a seasoned poker player considered by many to be the absolute best.

It all culminates in a climactic finale featuring an intense battle between the two poker players. Who wins this riveting poker game forms the crux of this performance-driven movie. Interestingly, Poker author Michael Wiesenberg refers to the film as one of the greatest poker movies ever made.

The story is about a heist involving Eddie (Nick Moran), a card sharp who loses £500,000 to a ruthless crime lord in a rigged three-card brag game (one of the earliest versions of poker). He and his buddies decide to rob a small-time gang living in the next-door apartment to pay off this heavy debt. What ensues is a series of serious-yet-funny incidents with Eddie and his motley crew trying to pull off the seemingly impossible.

Rounders, the Matt Damon and Edward Norton starrer, takes you deep into the world of poker-playing rounders – a term used to describe players who hop from city to city in search of games with high stakes. The stars play childhood friends – Mike (Damon), who loses a game of underground poker and falls into debt, and Worm (Norton), a hustler recently released from prison.

While it received mixed reviews during its theatrical release, it has, since then, become a cult film owing to the poker boom in the early 2000s. The climax, where Mike leaves New York for Vegas to compete in the World Series of Poker, inspired many a poker player (including Brian Rast, Dutch Boyd, and Gavin Griffin) in later years. Professional poker player Vanessa Rousso even remarks on the movie as one of the best movies ever made on poker, truly capturing the essence of the game.

Two televised films with the same title were adapted from D.L Coburn’s play – one that was released in 1981 and the other in 2003. Both films narrate the story of two elderly residents at a nursing home and how gin rummy games bring out their true colors.

After Weller Martin teaches his friend Fonsia Grey how to play gin rummy, he challenges her to a game. However, Fonsia always gets the better of Weller even after they play a series of games. Dick Van Dyke and Mary Tyler Moore play the respective characters in the 2003 version, playing off each other perfectly. While the film focuses on the camaraderie between the two leads, it also helps us understand the nuances of gin rummy, albeit in a quick way.

Based on the best-seller book Bringing Down The House by Ben Mezrich, a notable scene involves the team returning to Planet Hollywood to collect their prize money. 21 exposed viewers to Blackjack – the exciting casino banking game which uses a single deck of fifty-two cards and hails from the Vingt-Un family.

Remarkable directorial work by Aaron Sorkin coupled with a power-packed performance by Jessica Chastain makes Molly’s Game worth a viewing. It dives deep into the true story of Molly Bloom, an Olympic-class skier who ran an exclusive, high-stakes underground poker game for global celebrities, eventually becoming a target for the FBI.

The movie offers an intriguing take on high-profile poker games, working well as a slow-burn drama with occasional thrills. As is the case with most biographical movies directed by Sorkin, Molly’s game also keeps you hooked with its developments all through. The film seamlessly integrates elements such as poker, mafia, sports, and celebrities.

A few honorable mentions on this list include The Safdie Brothers’ Uncut Gems (2019), Paul Schrader’s The Card Counter (2021), Damian Nieman’s Shade (2003), and Robert Altman’s California Split (1974). One thing we can all agree on when it comes to movies centered around card games is that they’re entertaining to watch.