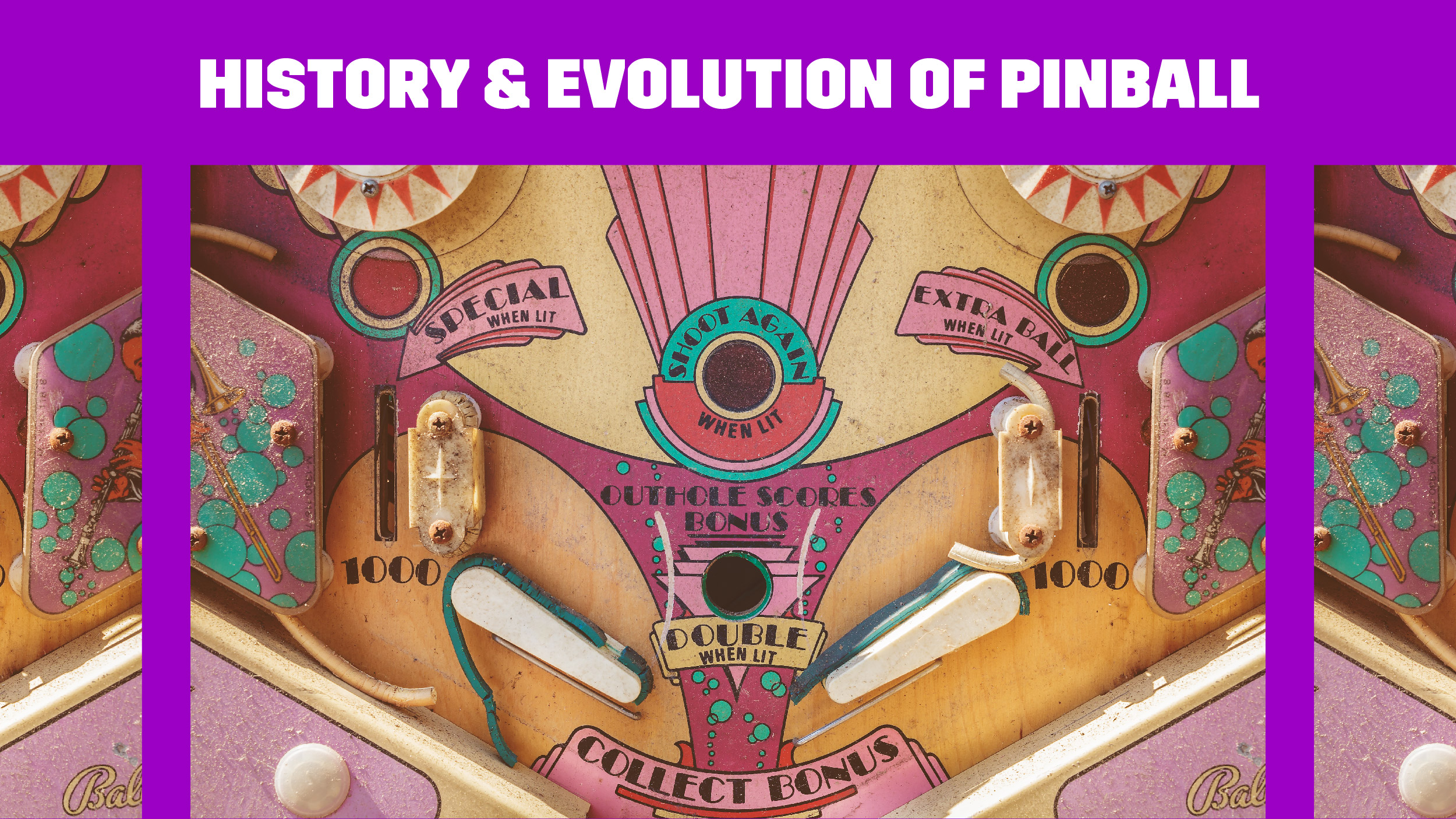 When you see a pinball machine in the year 2022, there’s a tendency to think that it’s something super retro. However, you’ll be surprised to know how widespread the pinball game still is. In 2006, the world just had a few hundred players and around fifty odd competitions. But the numbers have grown since then by nearly twenty times.

For starters, pinball is a coin-operated arcade game in which players earn points by shooting metal balls on a sloping playing area, striking unique targets, and keeping the ball in play for as long as possible. Pinball found massive fame during the 1970s-80s when high school and university students flocked to play it at coin-gobbling pinball machines in bars and gaming arcades. But pinball history goes back a lot longer – by a century, to be precise.

By default, a discussion on pinball is incomplete without diving deep into the first pinball machines and the evolution of arcade games as a whole. If the history of pinball piques your interest, you’ve landed on the right page. Read on to learn interesting facts about pinball and its impact on pop culture.

When you look back at the earliest versions of pinball, it didn’t exactly look like what the game is today. We can trace the origins of pinball back to a time in Europe when lawn games enjoyed immense popularity.

Europeans developed a parlor game known as Bagatelle tables to bring the same level of fun indoors, invented in the late 18th century by the French. This took the shape of a mini pool table-shaped wooden box. A cue-like stick was used to knock the ball around. The strategically placed pins on the board would lead to the ball bouncing around and scoring points. The score would depend on what each pocket said.

The earliest version of pinball did not feature flippers or electricity usage.

An Improvised Variant of Bagatelle

In 1871, British inventor Montague Redgrave took it upon himself to enhance the already-existing game of Bagatelle. For the same, he was awarded a US patent.

Redgrave added more compactness to the game. He reduced the size of the table, used small marbles instead of balls, and inclined the box. The game also saw the addition of a plunger and a coiled spring – something that modern pinball machines also use.

However, these Bagatelle tables were constantly driven by the luck factor. It would entirely depend on the placement of scoring pockets (and truckloads of luck) to secure a decent score once the ball was released from the plunger onto the table.

The first coin-operated pinball machine with the contemporary look did not see the light of day until the 1930s. Created by Automatic Industries, the company called it a “whiffle board.”

The invention of Richard Maloney’s game called “Ballyhoo” closely followed in the 1930s. Other prominent games that originated around this time include Bingo Novelty Company’s “Bingo” and D. Gottlieb & Co.’s “Baffle Ball.” These games were developed with wooden tables and legs – a stark contrast to today’s pinball machines made of steel and chrome.

Even with all these inventions during the period, none were referred to as pinball. The term “pinball” was coined in 1936.

In 1933, the first electricity-powered pinball machine was developed. The only significant addition to the existing was a battery. The sounds were generated through chimes, buzzers, and electro-mechanical bells. The score was maintained using a clock counter.

The Establishment of Tilt

The Great Depression began in 1929. While everyone expected games and entertainment to die a slow death during this time, pinball gained popularity against all odds. Being a low-cost game that anybody could play and let their hair down a little, pinball was revered by one and all.

Many pinball operators offered prizes for players who beat their daily high scores to get repeat customers. This led to a pinball cheating spree where players would resort to shaking the table and manipulating the results.

The tilt mechanism was invented by Harry Williams (the founder of the Williams Manufacturing Company) in 1935 to oppose this. Presently, pinball machines possess two tilt devices: one for tilting side to side and another for “slam tilt,” when a player bangs the machine with their hands.

Even the earliest pinball machines featuring the tilt mechanism had built-in warnings. This implied that players wouldn’t face immediate penalties for attempting to manipulate the machine.

The Second World War was responsible for a short-term fall in the popularity of pinball. Between 1939 and 1945, most of the resources in the US were directed towards the war, causing a lull in production at the time.

When pinball first emerged during the early 1930s, around 145 pinball manufacturing companies thrived, most Chicago-based. Owing to intense competition, most pinball manufacturers dropped out of business around the mid-1930s. By then, only fourteen such companies existed.

The “Golden Age” of Pinball: Flippers

Post-WWII, the public interest in pinball slowly rose. This was especially the case in 1947 when D. Gottlieb & Co invented flippers. The Humpty Dumpty was the very first pinball machine having flippers.

The period between 1948 to 1958 is often referred to as the “Golden Age” of pinball. Several exciting developments took place on flippers during this time.

For instance, in 1948, Geneco used flippers for their “Triple Action” pinball machine. The placement was what made it stand out. While today’s flippers face inward, Triple Action’s flippers face outward. Game creator and engineer Steve Kordek played a pivotal role in developing what we consider the modern pinball game.

The Banning of Pinball & Eventual Fall

Interestingly, Pinball was technically illegal to play in many significant cities, even during its golden period. In 1942, the NYC municipality chose to ban the machines altogether. This was attributed to the laws against gambling, and players indulged in betting on the results of pinball games and bingo pinball machines.

The 70s saw the rise of video games. At this juncture, pinball struggled to stay relevant amongst the masses. Video games came with the advantages of ease of play and avoided the issue of space constraints. Therefore, operators began ditching pinball machines and offered video games instead.

During this time, D. Gottlieb & Co (lead manufacturer of electro-mechanical pinball machines) lost significant business to Bally and Williams, who produced electronic machines. The 1980s saw the domination of Bally and Williams in the pinball industry. Later on, the popularity of pinball continued to fall. Ultimately, in 2002, Stern Pinball was the only prominent designer making pinball machines.

The Modern Ways to Play Pinball

In the mid-2010s, several new and improved versions of pinball made their way into the market. Some used LED playfield lighting, integrated LCD monitors, and backboards. At present, software-based versions of pinball are in fashion; they’ve been developed for computers, smartphones, and other gaming devices. Slowly yet steadily, the game started to restore its lost fame.

In the pandemic era, online variants also received widespread traction. One such version of Pinball is available to play on the MPL app. It brings back memories of yore, especially for those who grew up in the 80s and 90s. The game features some of its most unique components, including flippers, bumpers, blockers, plungers, rollovers, spinners, and more. What’s more, you can play free practice games and cash battles. Thanks to their exciting online versions, the current generation of gamers will also expose themselves to arcade games.