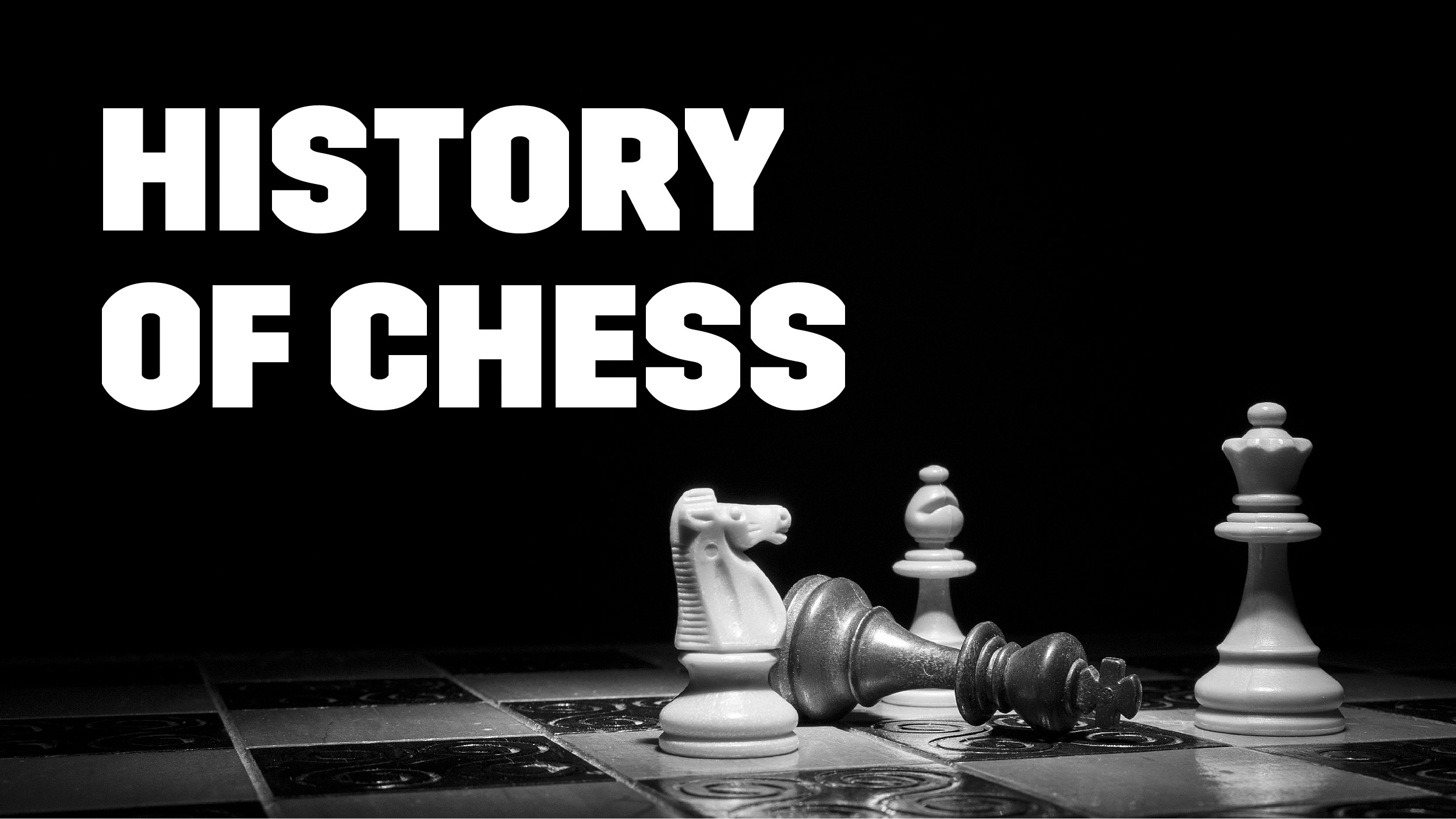 If there’s one board game that the whole world knows about, including the rules, it’s likely to be Chess. People love to play Chess to test one’s intellectual and strategizing skills. It is also played on a professional level, governed by international bodies and standardized regulations. The appeal of Chess transcends ethnicities and communities, making it a universally acclaimed and accepted game, where nothing but one’s skills in comprehension, judgment, and brainpower matter.

As you might already know, Chess is played on a square chessboard with sixty-four pieces arranged in a specific way on an 8×8 grid. While most of us know how to play a chess game and win, not many know about the game’s fascinating origins. That’s what we’re here for – keep reading to learn more!

The earliest form of the chess game dates back to sixth-century India. Like the modern version, its ancestor – called chaturanga (or “catur”) – was also played on a similar 8×8 grid and generally featured pieces that you’d find in Chess.

While it’s difficult to pinpoint the exact rules of chaturanga, it looks strangely similar to modern Chess, with specific vital differences. First, the rules applicable to the queen’s (counselors, back then) movement and bishops (elephants, back then) had some limitations.

The game’s objective is somewhat different: specific accounts (of chaturanga) mention that a player could win by taking out all opponent pieces except the king.

During the tenth or eleventh century, the rules of this game then spread to Persia (Middle East), where it received the name “chatrang.” This is where one can find the earliest records of Chess.

The game gained interest within the rest of the Arab world soon after. In the meantime, Chess also spread to China, Japan, and Southeast Asia, where it metamorphosed into games like xiangqi and shogi, which are frequently referred to as Chinese and Japanese Chess, respectively. The period also witnessed the first scholarly studies of Chess, profoundly analyzing the problems of the game, chess openings, and other valid topics even today.

The Arrival of Chess in Europe

Though Chess originated in the sixth century, it was during the 12th and 13th centuries that it spread to Europe from the Middle East. The Byzantine empire passed the game to Southern Europe while it got to Islamic Spain via North Africa. Medieval kings and noblemen in Europe quickly took an interest in the game, gaining popularity during the late medieval times.

The aristocracy and nobility in Europe immediately associated the game with elitism, and young knights believed that learning Chess would take them places. Something similar took place in China with the Go game. Though Chess was deemed an essential skill for knights, it also became associated with violence, hedonism, merry-making, and gambling, and some Catholic churches tried their best to ban the game altogether.

The European Impact on Chess History

As Chess rose in popularity in Western Europe and other parts, it underwent numerous aesthetic and mechanical transitions. European players developed the checkered boards and altered the names of pieces to reflect medieval European figures. Now, you realize how certain pieces received titles like knights, rooks, and bishops.

At this time, the duration of chess games began to range from hours to days. The game’s excruciatingly slow pace resulted in several changes in the rules, including the option to move pawns two spaces on the very first move. The development of the “castling” concept also helped save the king in the game’s initial stages.

Around 1500, South European chess players made many changes, rendering both the queen and the bishop pieces more powerful. The period also witnessed a considerable shortening of the game. This was also when the modern game and the chess theory entered the picture. Chess legends like Andre Danican Philidor and Ruy Lopez de Segura also largely influenced the game as they re-analyzed principles and guidelines of chess openings and end-game scenarios.

How Chess Became a Competitive Sport

By the beginning of the nineteenth century, the game had become a standard fixture in contemporary European life. People happily joined chess clubs, and newspapers frequently reported chess problems and promoted chess-related discussions.

1851 saw the first-ever international chess tournament. The outcomes of this included development of modern timekeeping, sealed moves, and the rise of speed chess variations. In 1886, the first World Chess Championship was held.

The first undisputed World Chess Champion is the Austrian (later American) player Wilhelm Steinitz, who initially epitomized the assertive, highly Romantic style of the period, though later theorized the positional method of play that would go on to dominate the twentieth century. His rival Adolf Anderssen also played a significant role in popularizing contemporary chess problems.

Other key players during the time include the German mathematician Emanuel Lasker, who was World Champion for 27 years, and the American Paul Morphy, a chess prodigy.

Until the 1880s, white going first wasn’t officially part of the rules. Before that, players alternate or ask the first player to pick their color.

During the twentieth century, the World Chess Federation (Fédération Internationale des Échecs or FIDE) implemented standardized rules of Chess and established international competitions. Another radical development during this time was the development of chess theory, which launched new play styles.

In the USSR, World Champion Mikhail Botvinnik was responsible for developing an entire generation of Soviet chess players who commanded the game for a good part of the twentieth century, including World Champions Garry Kasparov and Anatoly Karpov.

The 1972 World Championship match between Bobby Fischer and Boris Spassky is often called the “match of the century,” becoming a significant event in the Cold War between the Soviet Union and the United States.

Online play, chess computers, and high-speed versions of Chess gained prominence during the post-war period. In 1997, IBM’s Deep Blue (a chess computer) managed to beat Kasparov, the reigning champion at the time, in a genuinely historic match-up.

The World Chess Federation – mostly referred to by its French acronym FIDE – is an international Swiss-based organization connecting the numerous national chess federations and acting as the presiding body of international chess competitions. It was established on July 20, 1924, in Paris, France. In 1999, International Olympic Committee (IOC) recognized FIDE.

The first recognized world championship event was the 1886 showdown between Wilhelm Steinitz and Johannes Zukertort, the two leading players at the time. Steinitz won the contest and became the first world champion. Between 1886 & 1946, the champion dictated the terms, requiring challengers to raise a substantial stake and defeat the champion in a match to replace the current world champion. After the expiry of reigning world champion Alexander Alekhine in 1946, FIDE took over the management of the World Championship, starting with the 1948 World Championship tournament. From 1948 to 1993, FIDE organized a series of tournaments to pick a new challenger tri-yearly. In 1993, reigning champion Garry Kasparov cut ties with FIDE, leading to a rival claimant to the World Champion title for the subsequent thirteen years. Eventually, the title unification took place at the World Chess Championship 2006, and all matches in the chess world have been administered by FIDE since then.

Since the start of 2014, the championship has followed a two-year cycle, although the 2020 match was deferred to 2021 because of the COVID-19 pandemic, and the next game is scheduled to be held in 2023. Magnus Carlsen is the current official world chess champion after he defeated Viswanathan Anand back in 2013. He has successfully defended the title in 2014, 2016, 2018, and 2021.

What Are Some Memorable Games in Chess History?

In every sport (or game), one can differentiate between great and legendary games. Throughout the history of Chess, players and historians have enjoyed harking back to certain games. This may be because they could capture the strategic spirit of a specific era ideally, or they debuted a fascinating new idea or strategy the world had not seen before.

Okay, so you’ve learned a lot about the history of Chess. Since you’re here, why not play a few games of Speed Chess? Download the MPL Pro app immediately and enjoy!