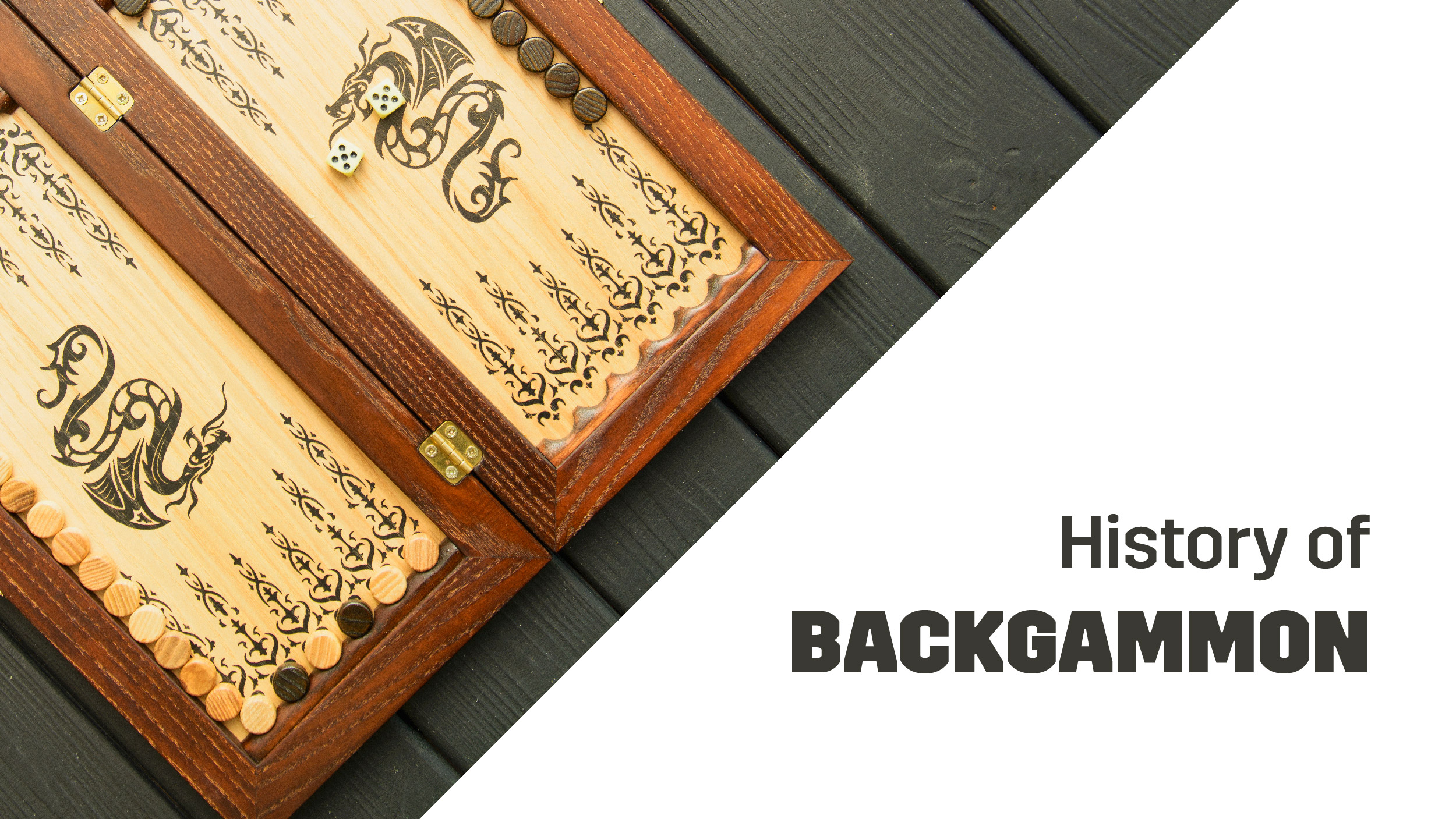 Backgammon is undoubtedly one of the all-time popular board games. But not many players of modern Backgammon would be fully aware of its historical origins. The oldest known backgammon board is said to have existed back as early as 3,000 BC, even rivaling the histories of games such as Go and Chess.

Backgammon is both a board game and a dice game, and it is truly no surprise that dice games enjoy massive popularity in most parts of the world. Two players can play Backgammon at a time. While it may not require intense thinking and strategy like Chess, it still manages to be immensely entertaining and simultaneously challenging.

In modern Backgammon, each player gets fifteen checkers, which they need to move to the opposite end of the board, and eventually bear off, i.e., to successfully move them off the board. However, it may not be as easy as it sounds, as you’ll need to learn the game layout of backgammon boards, backgammon rules, and even the purpose of the doubling cube. For now, let’s keep the game nuances aside and focus on the history and evolution of this fascinating game.

How old is Backgammon?

Backgammon is among the oldest games to exist, right alongside Chess. The game is around 5,000 years old and supposedly originated in Mesopotamia – modern-day Iraq. The evidence supporting this claim was recently found when early dice made out of human bones were excavated in the region.

There’s also proof that the Egyptian Pharaohs found themselves totally into another board game that may likely be one of Backgammon’s ancestors many millenniums later. Boards that date back to 1500 BC were discovered in King Tutankhamen’s tomb in the Nile valley and at Enkomi in Cyprus, an Egyptian colony at the time.

Backgammon is a common feature at numerous coffee shops in the present-day Middle East. The game, in multiple versions, continues to be played abundantly in countries such as Iraq, Iran, Syria, Egypt, Jordan, Lebanon, and the rest of the Arab world. The game currently uses the name tawle (meaning “table”) in many Arab countries.

When you consider how old the game of Backgammon is, it’s pretty hard to pinpoint who exactly led to its invention.

A story goes along these lines: An Indian king sent his minister on a journey to Persia with a chessboard and a letter. The minister handed over the Chess game to the ruler at the time, Khosrow, with a very specific call-out: Decode how to play and understand the game’s rationale in three days.

However, King Khosrow could not figure out the game or its complexities in the given time. A few days later, his minister ultimately cracked the game. In return, Wuzurgmihr developed the game of Backgammon and had it brought to the ruler of the Indian subcontinent. Just as King Khosrow struggled to figure out Chess, the king of India struggled to understand Backgammon.

Per the Shahnameh, an epic Persian poem written by Ferdowsi, it was noted that Burzoe, a Middle Eastern physicist, invented Backgammon which took the form of a game called Nard. The board used for playing Nard is the same as for Backgammon’s, but slightly different rules apply. While the poem dates back to the eleventh century, it also asserts that Nard was invented in the sixth century.

Many believe Nard has existed as early as 300 AD, as it is vaguely mentioned in the Babylonian Talmud (the central text of Jewish law and theology). However, it is also possible that the text is referring to a different game altogether. Nonetheless, Nard continues to be a popular form of Backgammon in the Middle East.

Why is the game called Backgammon?

It is intriguing to note that the word “Backgammon” was not always the first choice to describe this game. The word Backgammon initially appeared in H. J. R. Murray’s work A History of Board Games Other Than Chess. Regardless of Murray’s efforts, the game still took the name “tables” amongst most people in 17th century England. The name gradually caught on as instances of the game being called “backgammon” are evident in 18th-century literature.

While no one knows where the name originated, most scholars agree that it possibly comes from Middle English: baec = back, and gamen = game. Worded together, these two words crudely translate to “back” and “battle,” implying the player’s intention to drive pieces off the board in Backgammon. Also, in Welsh, bach cammaun stands for “small battle.”

The History of Backgammon Game

The second-oldest backgammon board (nearly 5,000 years old) was discovered in the Royal Tombs of Ur in Mesopotamia in 1962. Incidentally, Mesopotamia is also the place of origin for the wheel, the first accepted math system, and even the first written language.

Much later, Backgammon made its way to Europe – namely France, England, and Italy. Writer Edmond Hoyle penned a book on Backgammon in 1745 describing the game’s rules in detail, along with some well-known strategies used even now. The 1920s witnessed the invention of the doubling cube.

The 1960s saw the first significant surge in popularity for Backgammon, courtesy of the Russian Prince Alexis Obolensky. He is referred to as “The Father of Modern Backgammon.” He also co-founded the International Backgammon Association and penned his own rules book. During the 1960s, he also hosted a series of tournaments in Manhattan, inviting many royals and celebrities.

These tournaments added to Backgammon’s popularity. Also, in the late ’60s, Hugh Hefner held numerous Backgammon parties at the Playboy Mansion. Hefner spent his final days playing the game with his family. Next up was the World Championship in Las Vegas that sprung in 1967.

In 2009, the United States Backgammon Federation was launched to capitalize on its existing popularity and spread it further. The federation consists of the best all-time players and tournament directors. Backgammon tournaments still grab many eyeballs even to this day. Eventually, Backgammon also made its way to numerous casinos. While the rules of casino Backgammon are slightly different, its mere presence in casinos showcases its popularity.

In 2007, a website called PartyGammon.com hosted a first of its kind $1-million Backgammon tournament. This massive, 128-player tournament led to a small revival of the game, all the while adding to its popularity surge. Hosted in the Bahamas, the contest received extensive television coverage. It attracted some of the best Backgammon players globally, with Andreas Martens winning it.

Backgammon traditions also remain strong at Shenandoah Country Club, with boards created by the Babylonian master carpenter Fouad Atto. Annual tournaments are held at this venue, with fantastic prizes for the winners.

Like chess and most other board games, computer programmers have invented “backgammon bots” that can play just as well or even better than the average human player. The digital version of Backgammon is currently trending. Now you can play Backgammon anywhere, anytime, owing to many online websites and gaming platforms such as MPL.

For the true enthusiasts of this brilliant game, nothing can truly beat the vibe and sounds of the checkers and dice being played on a neat, intricately designed wooden board.

However, if you’re enticed by reading up the history of Backgammon and wish to play an online version of the game, try the game on MPL. This version is easier to understand and play with timed sessions. There are plenty of cash prizes you can win by playing!