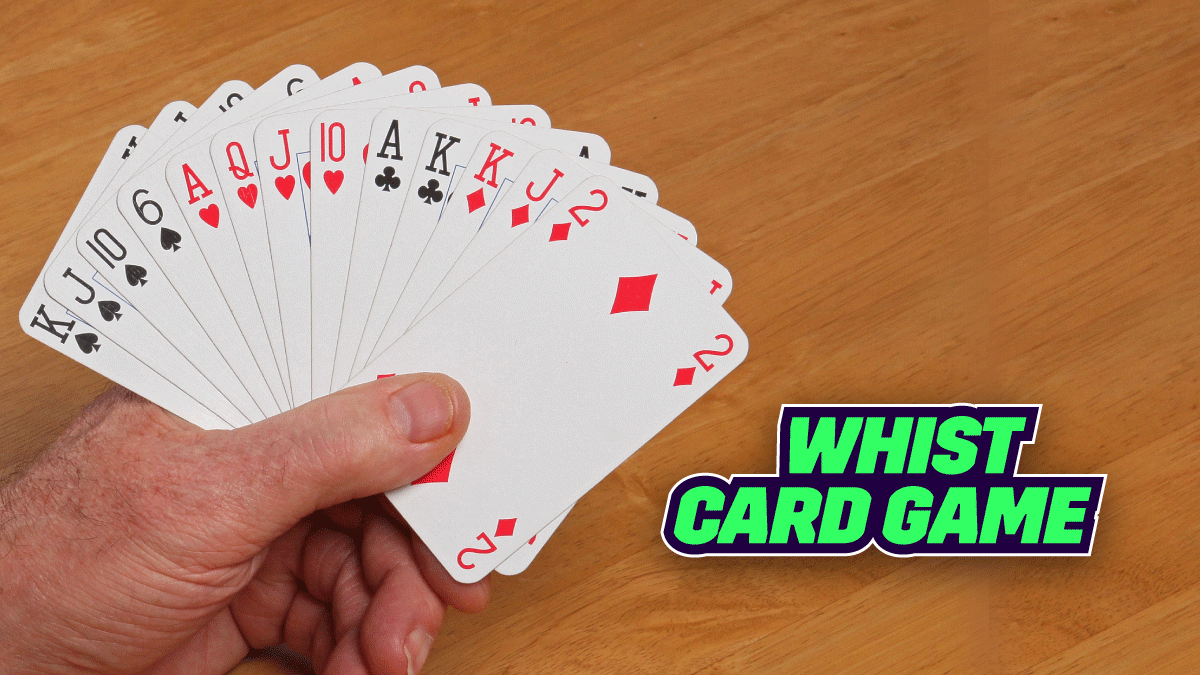 One of the most popular card games of the 18th and 19th centuries, Whist is a straightforward trick-taking game still played widely in Britain’s local tournaments. People play partnership whist among four players in social and fund-raising events, also called whist drives.

The whist card game gets its name from the words ” whist ” or ” wist, ” which means silent or quiet. The card game was derived from an old game, Ruff and Honours, and became the Western world’s premier intellectual card game in the 19th century. However, by the 20th century, Whist was replaced by Bridge.

If you have played the Spades card game or Bridge or other trick-taking card games, you will find learning how to play whist easy and fun.

The whist game is played between four players in a partnership of two.

Usually, the game is played using a standard deck of 52 cards. However, many games use two decks of cards with different back designs so that one deck can be shuffled for the next deal while one is dealt to players.

To start with, the player at the left of the dealer shuffles, and the player on the right cuts the deck. Only the dealer can be the last one to shuffle the cards and deal 13 cards to each player. The dealer deals the cards face-down, one at a time. The last card with the dealer is the trump card.

The suit of the trump card with the dealer becomes the trump of the game. The trump suit cards can beat other cards to win a trick.

The objective for each partnership (two players in a team) is to score points and win in excess of six tricks. The partnership with the highest points at the end wins the game.

How to play the whist card game?

The player seated at the dealer’s right begins the game and leads the first trick by playing any card from their hand. The other players follow suit in a clockwise direction and play a card of the same suit.

The player to win the trick leads the next trick by playing a preferred card. The game continues until the players have played all the cards in hand.

The classic card game of whist is played for 13 tricks. Once each partnership has played 13 tricks, the team with the most tricks in excess of six tricks wins 1 point for each extra trick. When a partnership reaches a winning score of 5 points, the team wins, and the game ends.

Tips and Tricks to Win the Whist Game

Whist is an easy-to-learn game that doesn’t require high skills to win tricks. However, you must implement a few strategies and use several tips and tricks to increase your chances of winning tricks. Here are a few whist game tips to win more tricks:

If you are the first player to lead the game, how will you decide which card to play first? It’s pretty easy! The best way to lead is by using your strongest suit or card. You can also lead with a singleton to aim at trumping in the suit. For instance, if you have an Ace of any suit, you can lead with that card to win a trick.

If you are playing second, you must follow the lead suit. Since the third and fourth players are in a position to play a better card than you and win the trick, you should play a low hand to avoid wasting a. high-value or otherwise useful card.

If you are playing the third hand, you can take a chance of playing high, although the fourth player has an advantage over you.

Play Low-Value Cards When in Doubt

If you are unsure of winning a hand due to being the first or second player or watching the opponents play high cards, it’s always best to play the lowest card that’s not a trump.

It is a game played in the USA which involves bidding in partnership.

Minnesota Whist is quite similar to Norwegian Whist, where there are no trump cards, and players can play hands to either win or lose tricks.

Knockout Whist is more of a children’s game where players who fail to win tricks are eliminated or knocked out.

The whist game is still quite popular in social and fund-raising events in Britain. These events are also called whist drives. However, the bridge game has taken over the popularity of whist, so card gamers prefer playing bridge over whist.

Is whist the same as bridge?

Essentially, the whist game was replaced by bridge in the 20th century. Both the games are quite similar in terms of gameplay and rules; however, they are not the same. Since bridge evolved from whist, it is a more structured and complex version of the whist game.

How do you win whist?

To win the whist game, the partnership must win the most tricks. For every trick won after 6 tricks, the partnership scores one point per trick, and the game ends once a partnership wins five points or the pre-determined number of points.

Can you play whist among 3 players?

You can play whist among 3 players if you play the Widow Whist or the Three-Handed Whistversion of the game. In the widow whist variant, an extra hand is dealt to the dealer’s left, called the widow, and players get an option to use the extra hand over theirs.