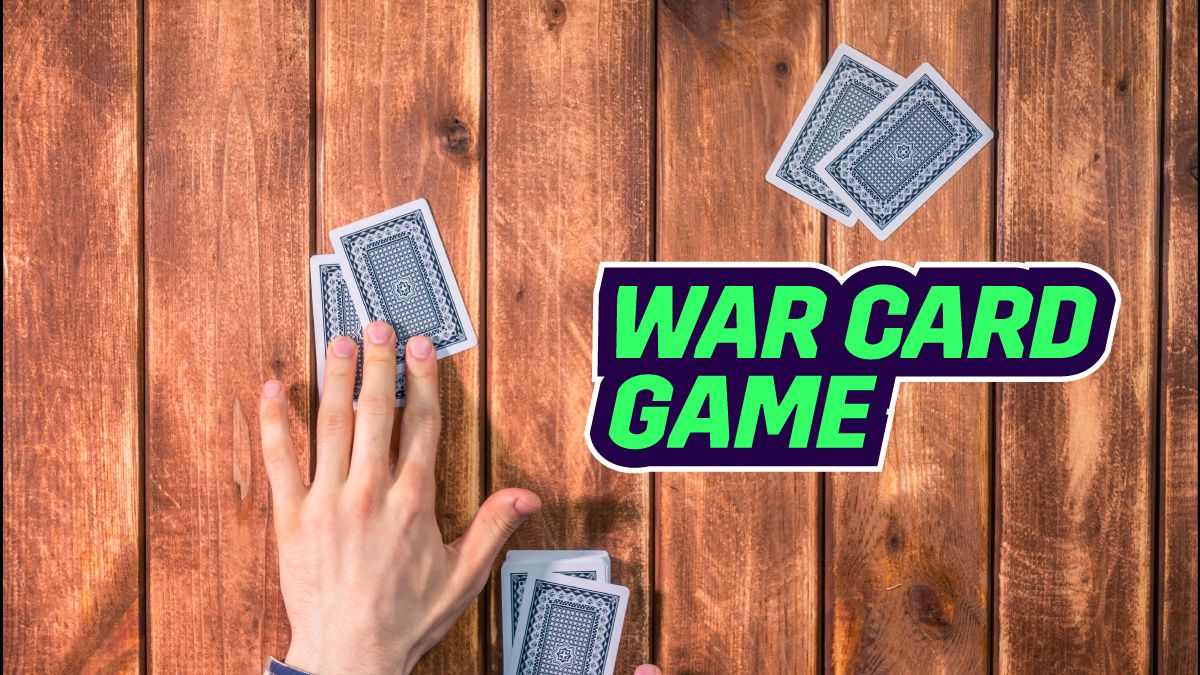 Do you know there is a card game called War? While the name sounds scary, it is a fun-filled game that two or more players can play.

War card game is a chance game that is played across the globe. Whether you are bored or want to have some fun, this will become your go-to game once you learn all about it. So, what are you waiting for? Just read ahead to learn how to play war.

The game’s objective is to finally win all your opponent’s cards. Two players often play war, although up to four people may play it. Without learning how to go about it, you will not be able to win, nor will you be able to fill your pockets. Read the rules and regulations below to familiarise yourself with the game and build a better strategy.

Also Read: How to Play Pinochle?

The card rankings, from highest to lowest, in War are as follows: A or Ace,  K or King, Q or Queen, J or Jack,  and all the numbers from the descending order, i.e., Ten, Nine, Eight, Seven, Six, Five, Four, Three and Two. Nothing beats an Ace, and no other card can beat a 2.

The cards should be shuffled. This should be a regular deck with 52 cards.  Try to change them up as much as possible, especially if you’re using a fresh deck. The initial stage in playing any card game is shuffling a deck of playing cards. There are various methods for shuffling cards, ranging from the basic overhand shuffle to the more complex Hindu shuffle or riffle shuffle, which you can use in the war card game.

Deal the cards to your opponent, then yourself, one by one, until you both have the same amount of cards. Each player should have about 26 game cards and should not look at them.

Place the cards on the table, face down. Players are not allowed to peek at their playing cards as they play war. Your opponent should also be unable to view your cards. You may also hold them out in front of you, fanned out.

Count to three before flipping a card. Simultaneously, each player must count down and flip a card. You should only reverse your topmost card in your deck.

Compare your cards to find which one is the best. The person with the highest card wins the round and keeps both cards in hand.

When the cards you flip are the same, go to ‘War.’ However, it is not the suit of the card that is important; it is the card’s value that is important. A war can be started by two jacks, two or more tens, or even two aces. For example, suppose you both flip your cards, and each of you gets a ‘6.’ The moment has come to go to battle.

To declare war, each player must place three more face-down cards on the table. Reverse your fourth card as you would when not at ‘War.’ Whoever holds the higher fourth card at the end of the round receives all ten cards. Suppose a player does not have enough cards to play the war; they must face up their final card. This is the card that will be used to play the war.

Also Read: How to Play Spades?

If there are three or four participants, if two or more players tie for the top card, each player must place one card face-down. Then, like in a non-War round, everyone plays the following card face-up. The player with the highest card will be declared the winner. The game War must continue if there is another tie between these two or more participants.

Play until one player has won all of the cards in the deck. This may take some time because War is a game of chance, but on a slow day, it’s a terrific way to pass the time.

How To Make War Card Game A Multi-Player Game?

If you want to play war with three or four people, you must follow the same steps above. However, while dealing, when you are playing with three, each will have 17 cards, and in four, each will have 13 cards, depending on the situation.

If there is a tie for the highest card among three or four players, each player puts a card face-down, followed by another one in a face-up position. The person with the best card wins. In case there is another draw or tie, the previously stated procedures will be followed, and another battle will begin.

What Are The Other Variations Of War Card Game?

The number of cards used in the conflict in Război, the Romanian variant of War, is determined by the number on the card that started it.

For example, if two (or more) players flip an 8, place seven face-down cards in the game war and one face-up. Because all face cards in this form have a value of 10, during a conflict, 9 cards should be placed face-down and the tenth face-up.

Some versions contain Jokers in the deck, which are regarded as the highest card that defeats all others, such as the variation Steal War, created by Gary Philippi and Hayes Ruberti.

Steal War is similar to standard War, where it has three and one cards, put down and placed facing up, respectively, but it is a cross between the original game and Stealing Bundles, with Jokers added to the main deck. These Joker cards are considered high valued ones. A distinctive fact is that after a conflict, instead of accumulating the cards and storing them down one’s deck, they are placed face-up in a different stack.

Newly won cards are placed on the top of the pile, and the winner has the advantage of choosing the place which is immediately on top. You no longer have the option to steal, and you may wish to continue playing rather than stealing. You should only continue if you have a better chance of winning a battle than taking a small sum.

If your card is similar to the one in your opponent’s cards, you can take both decks in multiplayer. In contrast to the conventional game, players examine their cards before playing them with a pile of cards that are face down. You have the option to steal your opponent’s face-up pile if the value of your card equals the top card in his face-up pile. Keep your card on the topmost stack you want to steal from, steal it, then replace it without affecting the order of the cards. The game goes on.

Combine the two Joker cards. Use these as the deck’s top two cards. They can beat anything and will provide a good hand to the player(s) that are dealt with.

For a shorter version of War, use half a deck. Take two of each card (two Aces, two Kings, two 3s, and so on) and separate them from the other half of the deck. Shuffle the deck and only use these 26 cards to play. The game will go significantly faster.

Make unique rules for cards. Pick a wild card, for example, at the start of the game.

As an example, make the 2 of hearts and the 3 of diamonds unbeatable cards. Even an Ace cannot defeat a wild card.

Make a 52-card battle. Arrange your 26 cards face-down across from your opponent’s 26 cards. As your opponent flips each card, go down the line and flip each card. Repeat with the pairs of cards you’ve won. Play until one person has collected all of the cards.

War card game is a game that can be quickly learned and played with your gang when boredom strikes you. Apart from the traditional version, there are several other variations that can make the game all the more fun as mentioned above. Try it out!