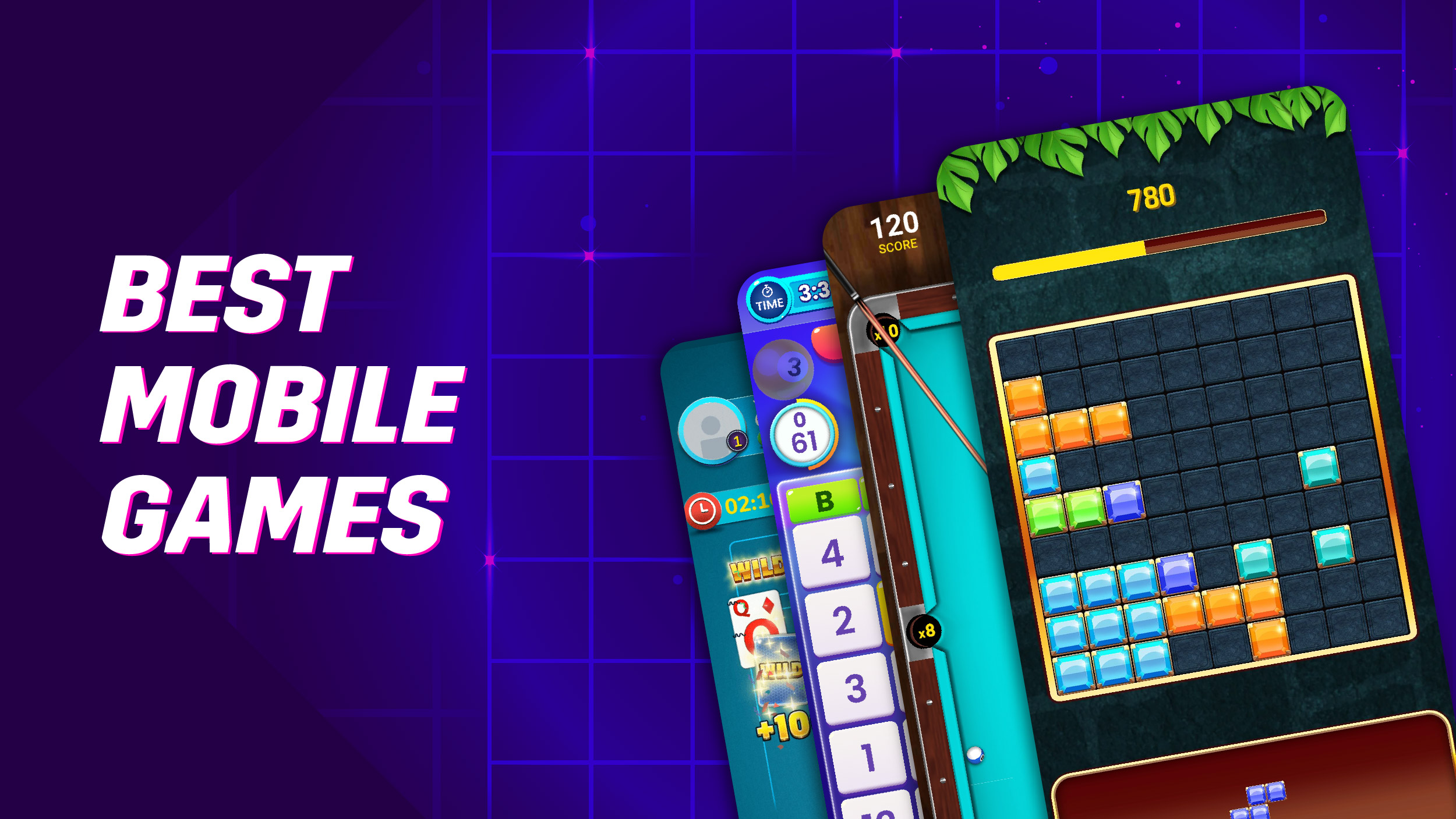 Mobile games got the world through the pandemic and continue to play a massive role in our daily lives. From being stress relievers, light-hearted entertainment, pastime, and serious gaming to real-money competitions, people like playing mobile games to satiate different purposes. With millions of ios and android games available on mobile gaming platforms, picking the best mobile games can be challenging. Moreover, sometimes you may come across paid games when looking for free-to-play ones.

Fret Not! We’ve done the difficult job for you and handpicked the best ios and android games that are free-to-play yet challenging, entertaining, and addictive. Here’s a list of games from categories such as arcade games, racing games, endless runner games, and more.

Also Read: Online Games to Play When Bored at Home

Brawl Stars – The Starr Force is one of the most popular mobile games for gamers who enjoy playing battle royale games. The game specializes in 3v3 combat and offers multiple game modes. You can complete different quests, unlock and upgrade characters, play in new locations, and collect items and power-ups within the game. Invite your friends for a multiplayer Brawl in this new game on your devices.

The AFK Arena game assumes the literal sense of AFK-Away From Keyboard and enables players to level up even while they are away from the keyboard. Doesn’t that sound fun? AFK Arena is an RPG game where you can collect heroes and build a strong force to save the world from an ancient evil. You can play solo quests, join battles against other players, and collect loots even while you aren’t physically playing the game. You must play this game yourself to experience the fun that lies within.

One of the most popular online gaming platforms to play mobile video games is Mobile Premier League (MPL). It’s a one-stop platform to satiate your gaming needs. The app offers a huge range of free-to-play and cash games, from fantasy sports to card games, casual games, and arcade games; the app provides a huge range of free-to-play and cash games. Some of the best mobile games you can play on MPL include Block Puzzle, 8 Ball Blast, Bingo Clash, Spider Solitaire, Cube Solitaire, Buck Hunter, and more. The app has something in store for players of varying skill levels.

Looking for a game that involves elements from different game categories? Empires & Puzzles is a unique game that combines the elements from RPG combat, base-building, card collecting, and match3 games to offer a tactical gaming experience. There’s a lot to do in this game-upgrade your heroes, craft weapons, collect the loot, grab farm resources, and unleash epic combos. You can also play multiple modes such as online raid battles and 1v1 duels challenges.

Well, who hasn’t heard about this world-famous game? Candy Crush Saga is an addictive arcade game where you have to swipe and match candies and complete objectives. There are hundreds of challenging levels, and getting your hands off the game is tricky. If you still haven’t played this game, you are missing out on something big. Candy Crush Friends Saga offers an appealing design and new gameplay that makes the game more fun.

Horizon Chase is a classic arcade racing game that provides hours of fun. With vibrant visuals and a thrilling soundtrack, you will find yourself lost in insane speeds, racing alongside an aggressive pack to make your way to the front. The app is free to download and offers five free tracks, while the rest can be bought through in-app purchases.

Are you into zombie games? Plants vs. Zombies 2 is an action-strategy adventure game that pits your plant collection against a hilarious horde of zombies. Your objective is to defeat the zombies, charge your plants with plant food, and devise a strategy to complete the levels. Traverse through 11 worlds full of zombies and complete new challenges for an ultimate gaming session.

Endless runner games never lose popularity amongst gamers due to the endless fun they offer. Subway Surfers is one such game that offers unlimited fun, provided you don’t lose a life. The game is based on the subway tracks where your objective is to keep running, dodge the obstacles, and collect coins to increase your points. Avoid ramming into the subways and barriers to continue increasing your score. Flex your fingers and get ready to swipe left, right, up, or down on your mobile screens and become a pro subway surfer.

Here’s a new game for all the soccer fans out there! When you are bored of playing FIFA, you can indulge in a mix of arcade and soccer action through the Retro Goal game. This classic soccer game offers a virtual kickabout for touchscreen displays. You can also build team management skills and create a team. Unlike console-style soccer, this game has smooth controls that help you easily score goals. You can easily win the games with savvy spending for a fast striker and club upgrades.

Words With Friends is the ultimate social game for crossword puzzle game lovers. Indulge into a competitive mobile gaming mode against friends, family, or even online players in multiplayer modes. Show off your vocabulary and spelling skills for a higher score and defeat your opponents in style. Download the Words With Friends 2 app from the Google Play Store or the Apple App Store for a brain-tickling mobile gaming experience.

One of the best mobile games that hasn’t lost popularity through the years is the Two Dots game. In this game, your objective is to connect dots and eliminate obstacles to complete the given goals at every level. Each level brings in new and challenging obstacles that are fun to solve. Play Two Dots only when you have enough time in hand, as you will find yourself hooked to this game. Android and iPhone users can download the app from the app stores and play all levels for free.

If you enjoy playing Sudoku and Tetris, you must try the Woodoku mobile game, which combines both games. Woodoku is a puzzle game that requires filling the rows, columns, and squares to clear the board. If you clear multiple rows, you get extra points. The game is free for download on the Play Store and App Store.

Ballz is an easy mobile game suitable for all age groups. This classic free-to-play arcade game is quite similar to the Breakout game with an objective to break the blocks with a collection of balls. If you are looking for one of the best android games with guaranteed entertainment, Ballz is the game for you.

Just like endless runner games, the color road game comes with a simple concept – controlling a rolling ball and collecting balls of the same color. The game is not as easy as you would imagine, as the difficulty level keeps rising as you go. Play for as long as possible to rack up the points and aim for a higher score.

A game that offers an easy gaming experience yet tickles the brain, Free Flow is a puzzle game where you have to match two dots of the same color. With several colored dots on the screen, matching the dots and pipes together gets tricky. This entertaining game offers a time trial play mode, easy gameplay, and hundreds of levels to unlock and keep you going.

Final Fantasy VII is a single-player RPG game for iOS and Android that includes elements from the entire timeline of Final Fantasy VII. This free-to-play game with gacha mechanics will offer unique dungeons and intriguing battles and enable players to unlock costume sets and special weapons. The game will cover events from the original Final Fantasy VII, Crisis Core, Dirge of Cerberus, Before Crisis, and Advent Children. What more could one ask for?

The final release date hasn’t been announced yet, but the game is expected to be launched sometime in 2022.

An upcoming crossover mobile RPG game set in the Disney universe, Disney Mirrorverse is another awaited fun mobile game of 2022. The players get to assemble their team of stunning 3D Pixar and Disney characters to fight against a dark force in an action-packed universe. The real-time combat, special attacks, and team strategy are bound to give you the thrill and excitement you have been waiting for.

While the game has been through the beta testing phase, the release date for Disney Mirrorverse is yet to be announced.

The DC Heroes & Villains game is one of the most eagerly awaited top mobile games to be launched in the early months of 2022. The game will be a blend of RPG components and match-three puzzle mechanics. The DC name is enough to get you excited but hold your excitement because the option to choose to be a hero or villain will make the game more fun.

Star Wars fans have waited long enough for the launch of this game, and hopefully, the wait will be over this year. Star Wars is a competitive team-based combat game set after the fall of the Galactic Empire. Likely to feature a host of aliens from the Star Wars universe and new characters such as rebellion heroes, bounty hunters, and imperial stormtroopers, this game is sure to garner a lot of attention. The initial release date for the game was 2021, but the game is now set to be released in 2022.

Another action-packed shooting game, Tomb Raider Reloaded, promises a session full of thrill and adventure for Lara Croft fans. Tomb Raider is an arcade-action genre game that features puzzles, tombs, artifacts, and guns -just what one would expect from such a game. Get ready to face underground tombs, lush waterfalls, dense forests, mountain caves, and maybe some dinos to complete your quests

The launch date for the game is not yet released by Canadian studio Emerald City Games and Square Enix London. Still, the game is expected somewhere in 2022.

Now that you have the list of the best mobile games of the year right in front of you, don’t wait any longer to explore these fun games on your phone. Meanwhile, keep an eye on the release date of the year’s upcoming games, as there’s no way you would miss playing them.